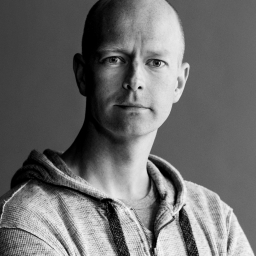 I was born in Denmark on a dark and stormy night in November 1976. I began writing when I was a teenager. My first book was a really awful horror novel titled Nidhug's Slaves. It didn't get published. Luckily.

During the next 7 years, I wrote nearly 20 novels--all of which were rejected--while working as a school teacher. The rest of the time I spent writing.

In 2000 I published my debut fantasy book, The Battle of Caïssa, and that's when things really took off. Since then I've published more than thirty-five books for children and young adults in genres ranging from fantasy to horror and science fiction.

My books have been translated into more than 15 languages and my series about the superhero Antboy has been adapted for film, which is available on Netflix. An animated tv series is currently in development.

A musical of The Devil's Apprentice opened in the fall 2018 and the movie rights for the series have also been optioned.

I live in Copenhagen with my wife, two boys, a dog named Milo and spiders in the basement.

Read an author Q&A for The Devil's Apprentice here and for The Wrongful Death here.

Featured books by Kenneth B. Andersen

The Wrongful Death is the third book in the Great Devil War series – and yet again I raced through it. I don’t think it could be read easily as a standalone, and I would recommend reading the previous books before anyone dives into this one. Philip is back in Hell, this time searching for the school bully, Sam, who shouldn’t be there (yet). This book goes ‘beyond’ Hell though, as Philip (with his friend Satina) journeys into Heaven and also Hades, providing a contrast between all of the ‘after-life’ worlds. The relationship between Lucifer and Jehovah, in particular, is very entertaining. I can tell that the author has had fun creating each setting and the characters within them – his vivid imagination driving the plot forwards through great world building and character development. Trouble is brewing in Lucifer’s kingdom, providing the backdrop for Philip’s search and the start of the ‘Great Devil War’. Yet again the book features strong themes and also an unconventional (though not disrespectful) view of religion – Heaven versus Hell, punishment and retribution in the afterlife and creation of the world (explained as six years in Heaven is a couple of billion years on Earth). There’s plenty of dark humour alongside some gruesome descriptions (so, as with the previous books, this may not be suitable for younger teenagers or for the faint-hearted). There are several familiar biblical and historical characters to watch out for (I’ll leave these as a surprise), and the inclusion of Hades also introduces Greek mythology. This provides not only entertainment but also an educational slant. The Wrongful Death doesn’t end as neatly as the two previous books – in fact, there is a huge cliff-hanger, so be prepared for it. I won’t give anything away, but it is clear that there is more to come (as there’s a teaser for the next book at the end). I’m looking forward to it!

The Devil’s Apprentice is a fantasy novel written from the viewpoint of a 13-year-old boy who finds himself in hell – literally. It’s an adventure story with a twisty mystery to solve, with some innocent early-teen romance and historical references as well. It’s the first book in The Great Devil War series. The book is very well written and well translated from Danish, with plenty of dark humour. It features impressive world building through vivid imagery, and I enjoyed visualising the author’s clever concept of Hell and its occupants. The Devil’s Apprentice reminded me of the Harry Potter series, as the plot is complex enough to satisfy teenagers and adults (of all ages), yet simple enough to entertain pre-teens. It covers some moralistic themes, including good versus evil, knowing right from wrong and that even the most angelic people can have a dark side, so its suitability will depend on a child’s maturity. As expected, the book focuses mainly on death, with a mention of suicide and punishment/redemption in the afterlife. Some adults may disagree with certain concepts, but the book would provide a good starting point for discussions. I’m not surprised The Devil’s Apprentice is a popular series in Denmark and I can see it potentially doing well in the UK too. I found it highly compelling and raced through it. As soon as I finished, I eagerly looked forward to the next one, which is always a sign of an enjoyable read.

The Die of Death is the second in The Great Devil War series and picks up where the first book – The Devil’s Apprentice – ended. Philip isn’t quite as ‘good’ as he was in the first book, as life with the Devil has made its mark – with more than just two tiny bumps on his head. This time, Philip has been brought back to the underworld by Death himself, as someone has stolen the ‘Die of Death’. Yet again, this is a dark and humorous read. It reminds me of the Harry Potter series, with devils, demons and tempters rather than wizards, witches and goblins, and a focus on Hell and the underworlds. I would recommend reading these books in order, even though this one contains some ‘flashback’ summaries of the first book. The plot moves at a fast pace with plenty of action, as Philip and his demon friend, Satina, search for the Die of Death and the villain who stole it. There are references to well-known characters, including Hitler, Judas and Pontius Pilate. I would love to see this on the screen – big or small – as the world building is excellent, bringing Hell ‘to life’, as well as all of its varied occupants. The book covers some difficult themes – right and wrong, heaven versus hell, good versus evil, redemption and punishment, immortality, terminal illness and, of course, life and death. Some of the locations and characters are fairly gruesome, and the detailed descriptions ensured that I could visualise everything in my head. I would suggest that this book is for slightly older (or more mature) teenagers and young adults and not for those of a sensitive nature or who scare easily. Parents of younger teenagers, in particular, may wish to read the book first to check it’s suitable. The Die of Death is a dark combination of fantasy, adventure and mild horror. This series continues to grow and grow – I’m looking forward to the next book.

Other books by Kenneth B. Andersen