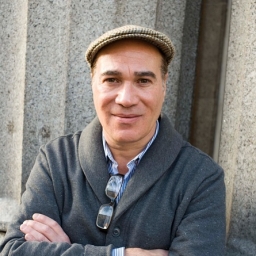 Yuval Zommer graduated from London’s Royal College of Art with an MA in Illustration. He has worked as a creative director at many leading advertising agencies.

Yuval’s passion for picture books has now won, and he is the author/illustrator of many highly acclaimed children’s books. Yuval lives and works in an old house in Notting Hill where he overlooks a small garden which is visited by urban foxes, squirrels, birds and many insects, some of which later find their way into his stories. His other favourite places are The Natural History Museum and the Zoo.

Yuval has won the Heart of Hawick’s Children’s Book Award 2015 in the best new picture book category and his work has been nominated for the SLA Information Book Award 2017 and the 2018 CILIP Kate Greenaway Medal.

Read a Q&A with the author on the World Book Day site here.

The Big Book of Blooms

Longlisted for the UKLA Book Awards 2021 | The newest addition to Yuval Zommer's bestselling series answers these questions and more as it introduces young children to all kinds of colourful, carnivorous, weird and wonderful flowering plants from around the world. Readers will enjoy learning about different edible flowers and why flowers are fragrant or colourful, not to mention grisly details about carnivorous and poisonous flowers.

The Big Book of the Blue

Shortlisted for the UKLA Shortlist Book Awards 2019 | Nominated for the 2019 Kate Greenaway Medal | Take a tour of the oceans in Yuval Zommer’s engaging reference book. It guides us through the seas in the company of the living creatures you’d see there, from the sea turtles and rainbow schools of fish in tropical waters, to whales and tuna, shoreline dwellers and the inhabitants of the deepest, darkest waters. Each page is wonderful to look at, and answers the questions children really want to ask: how fast does a flying fish need to swim to launch itself out of the water? Who does an octopus need eight arms? How long can a seal hold its breath underwater? There’s information too on the danger to the oceans from pollution and global warming, while a page of ‘fishy-phrases’ gives children the technical language to use when describing the animals that live in the sea.  A book to inspire and entertain as well as inform.

Other books by Yuval Zommer

Scruff just can't resist sausages . . . salami, pepperoni, chorizo . . . he simply loves them all. But gate-crashing barbecues and hanging around outside the local butcher's shop is not making him the most popular dog in own. Then one day, disaster strikes! There's a break-in at the butcher's - and ALL THE SAUSAGES are stolen! Neither the policeman, nor the mayor, nor the butcher can trace the sausage thieves. There's only one thing for it; Scruff will have to sniff them out! After a lot of twists and turns, Scruff's sniffing talents and bravery win the day - and Scruff and his chums are rewarded with a slap-up meal at a posh restaurant. Guess what's on the menu - SAUSAGES! Yuvall's debut picture book, The Big Blue Thing on the Hill, published by Templar in 2014, was nominated for the 'Heart of Hawick' Children's Book Award 2015, in the best new picture book category, as well as for the 'Read It Again!' Cambridgeshire Children's Book Award 2015, for best debut by an author/illustrator.

The Big Book of Bugs

Introductory spreads explain that bugs live nearly everywhere on Earth and give tips on how to become a young bug spotter. The book is divided into key groups of bugs, including beetles, moths, butterflies, bees, snails, crickets, grasshoppers, worms and spiders, all illustrated with scenic compositions. Some spreads approach the world of bugs thematically, such as bugs that come out at night, baby creepy-crawlies and life cycles, how bugs hide and show off and how some bugs love to live in your home. The text is chatty, funny and full of amazing facts.

Scruff the dog is a stray, who just loves to dig. It doesn't make him the most popular dog in the neighbourhood. But when he sniffs out a pile of old bones, he gets all the neighbourhood dogs to help him. They uncover not one, not two, not three... but 100 bones. It is the most exciting dinosaur discovery of all time! Scruff's find wins him new friends and a new home. A heart-warming story about an underdog who comes out on top.

The Big Blue Thing on the Hill

An outstanding debut picture book from author and artist Yuval Zommer. When the Big Blue Thing (a camper van to us humans) arrives on Howling Hill, the local wildlife all agree it has to go. First the wolves try to scare it away,then the bears, boars and foxes have a go. Finally, the wise owls suggest sending the smallest critters - the insects - to do the job. A cloud of bees, flies and dragonflies make sure that the Big Blue Thing runs away at top speed!

The Big Blue Thing on the Hill

An outstanding debut picture book from author and artist Yuval Zommer. When a blue monster (that humans will see is a camper van) arrives on their hill, the local wildlife agree they must get rid of it. They send foxes, wolves, warthogs and even bears to scare it away, but it is only when wise owl suggests sending the smallest of them - the insects - that the big blue thing finally gets moving at top speed!