Q&A with P.G. Bell - author of The Train to Impossible Places 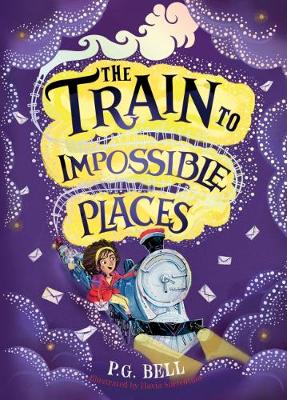 Your magical new series, The Train to Impossible Places, is filled with impossible adventures. Can you tell us a bit more about where the inspiration for it came from?

It started life as a bedtime story for my eldest son when he was just three years old. He wanted a new instalment every night for a week, so I had to think on my feet and throw in as many things as I could think of to hold his attention. He kept asking me for more, so it must have worked!

I’m terrible at science, so I had to resort to some old GCSE revision notes to get to grips with Newton’s laws of motion. It was actually quite fun to dive into though – I think I’ve got a better understanding of it all now than I did when I was 13. (Not much better, but a bit!) As for fuzzics, I would really like a Negotiable Gravity drive of my own. I’d use it to store furniture on my ceilings and effectively double my floor space!

Suzy visits several Impossible Places on her journey with the Impossible Postal Express. My favourite is the Topaz Narrows with the turquoise water and sugar-white sand. If you had the chance to visit one location in the Union of Impossible Places, where would you go?

I’m rather fond of Trollville. I wanted to create a place that felt like an extension of the trolls themselves – industrious, inventive, not always terribly practical, but definitely memorable. I hope I succeeded, as we’ll be seeing more of the place in future adventures.

You spent your childhood in Wales surrounded by trains and railways. What is your favourite train journey that you’ve ever been on?

I’ve ridden the Jungfrau railway in Switzerland, which takes you from the town of Interlaken, through the heart of a mountain and a glacier, to the highest railway station in Europe, with a view across the Alps. I’ve also ridden the Shinkansen – the Japanese bullet train – from Kyoto to Tokyo, which felt like a glimpse of the future, even though the train staff all sport old fashioned fob watches.

You’ve had all sorts of jobs in the past from being a lifeguard to roller coaster operator. How did you eventually find your way to become a children’s writer?

It was almost accidental. Once I’d told the bedtime story to my son, it stuck around in my head for about a year until I finally decided to try writing it down. It’s the most fun I’ve ever had telling a story, and I wrote the first draft in exactly 100 days! From there, things moved very quickly – I showed it to my friend Claire Fayers, who is a children’s author, and she liked it so much she showed it to her agent. Her agent liked it, and two weeks later she was my agent as well! Six months later she’d put together an auction for the publication rights.

To enter the Ivory Tower and access the library, you need to deposit brand new information. Can you tell the readers a magical new fact about your book that they may not already know?

Ursel, the bright yellow bear who serves as firewoman aboard the Impossible Postal Express, was an orangutan in the original draft, then a baboon, and she was almost a robot! It was my wife’s idea to make her a bear.

What are your favourite stories to share with your children?

The Worst Witch books by Jill Murphy. Such a great and accessible fantasy series – the Harry Potter of its day. They were among my favourites when I was young, and it’s nice to know they’re still going strong today. And you can’t go wrong with Roald Dahl. Both my boys are really enjoying his books.

Can you give us a sneak peek of where Suzy’s next adventure will take her or is it top secret?

I think I’m allowed to give you a few sneaky hints. The story picks up a few months after the first book – the Impossible Postal Express is ready to hit the rails again, and Suzy is determined to prove she can be a good Postie. But when Trollville is faced with destruction, she realises that only she and the crew can save it.

The Train to Impossible Places by P.G. Bell, published by Usborne, is out now.