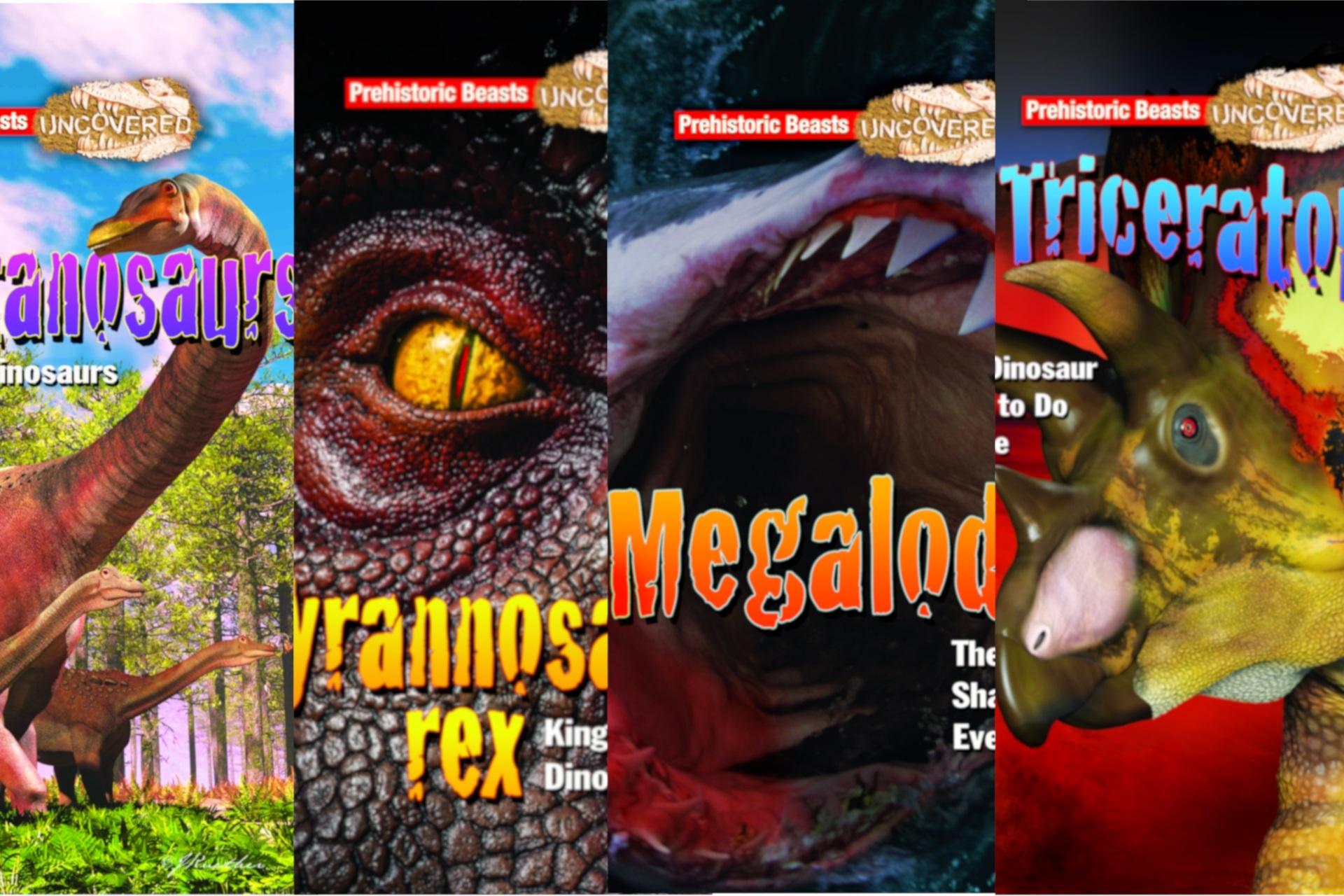 Dougal Dixon has released four fantastic new books, each of which focus on a different prehistoric creature. The first four in this brilliant new series are amazingly in-depth and look at some of the most fascinating animals in history, from the towering Titanosaur to the Massive Megalodon. The Publisher, Ruby Tuesday Books Ltd, love this brilliant new series. Publisher Ruth Owen had this to say about the creation of this fascinating new collection:

‘I love science and I love dinosaurs – so it was a fantastic opportunity to work with author and paleontologist, Dougal Dixon, to create and publish our new series. It was also fascinating to work with the artists, from around the world, who created the life-like 3D artworks of the animals featured in the series.’

The first four books in the series were published on the 30th April and are filled with up to date information ideal for devout Dino fans! Our Editorial Expert Andrea Reece has read each of the four fascinating titles. Andrea's full reviews and the publisher's piece of passion can be found on each book's pages.

Our June 2018 Non-fiction Book of the Month, Tyrannosaurus Rex- King of the Dinosaurs (7+ / 9+) provides a fascinating look at one of the most terrifying predators to ever walk the prehistoric earth. The latest research and scientific discoveries have been compiled in an exceptionally educational book. Find out more about this iconic dino’s behaviours and learn about the fascinating new use of technology in order to create CGI reconstructions of these awesome animals.

‘it explains how the study of ‘muscle scars’ on T.rex bones dramatically changed our understanding of how the animal stood and moved; it includes photos of fossilised scaly skin from an adult T.rex discovered only in 2017 … Full colour throughout and with a useful glossary, this will inspire young palaeontologists.’ Andrea Reece, Editorial Expert

Megalodon - The Largest Shark That Ever Lived (7+ / 9+) contains everything you could possibly want to know about this enormous prehistoric predator. The book explores how it used to hunt down whales. How did one of the most powerful predators in the sea became extinct? Was there a bigger fish? This richly illustrated book is filled with everything that is known about the earth’s first sharks.

'Everyone loves a shark, and they don’t come bigger (18 metres) than Megalodon. This new book, part of the Prehistoric Beasts Uncovered series, doesn’t just give the known facts about Megalodon, awesome as they are, it also explains how we know what we do, and how scientists deduce information.' Andrea Reece, Editorial Expert

Triceratops - The Dinosaur Built to do Battle (7+ / 9+) looks at how these interesting prehistoric animals fought to take control of their herds. Fossils and scientific breakthroughs have led to discoveries about this Dinosaur’s huge frill. Dougal Dixon’s expertise as a paleontologist, writer and book editor to bring to life one of the most popular dinosaurs to ever walk the earth.

‘Now scientists can look for Triceratops fossils in whole new areas, and new discoveries will certainly be made. Other pages show how modern technology has revealed new information about Triceratops eating habits, but that scientists learned lots too by recreating battles between Triceratops using plastic models. Full colour throughout and with a useful glossary, this is an inspiring information book.’ Andrea Reece, Editorial Expert

‘As of 2018, about 50 species of Titanosaurs have been discovered but the amount we know about these giant creatures is expanding all the time thanks to the work of paleontologists around the world. This new book, part of the Prehistoric Beasts Uncovered series, is filled with fascinating information and some wonderful photographs of Titanosaur bones but its descriptions of the detective work that goes on in the laboratory will also inspire young readers.’ Andrea Reece, Editorial Expert

The advances in research has led to us knowing more than we ever thought possible about this amazing prehistoric animals. A brilliant collection of books that will bring STEM to life for young readers and is a great read for children fascinated by dinosaurs!