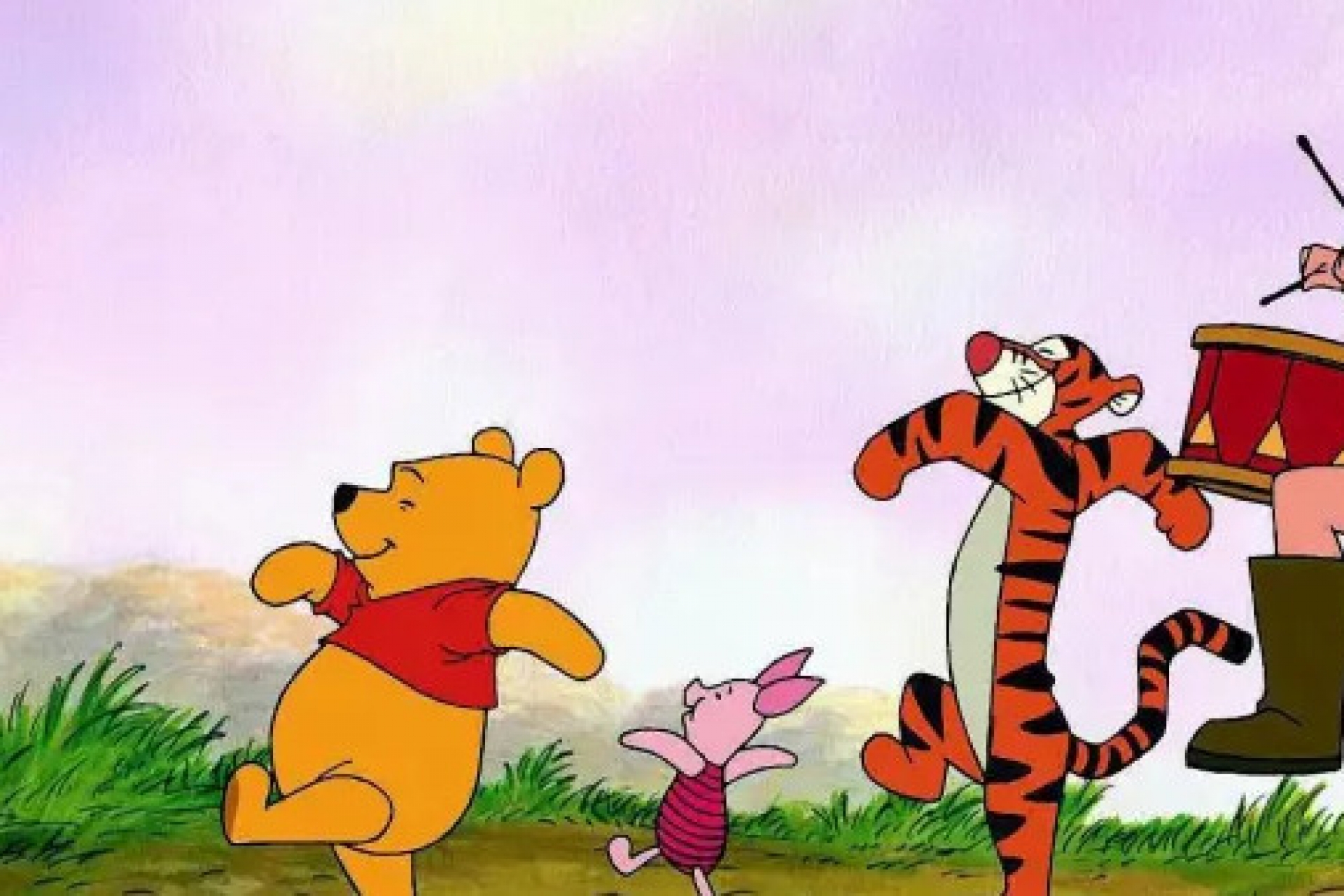 Winnie-the-Pooh may be a Bear of Very Little Brain, but we love him here at LoveReading4Kids...and we are sure you do too?

Today we celebrate this special little Bear and his forest friends on 18th January, National Winnie-the-Pooh Day, the day of A.A. Milne's Birthday.

We are marking the occasion with plenty of honey, and a cheeky game of Poohsticks...and maybe a little party just like Christopher Robin organised for Pooh after he saved Piglet from the flood. And yes, of course, we'll have some of those little cake things with pink sugar icing!

A.A. Milne (1882-1956) never intended to be a children's writer, he saw Pooh as a pleasant sideline to his main career as a playwright and regular scribe for the satirical literary magazine, Punch.

Observations of his son Christopher Robin led Milne to create the characters we know and love and Milne's first book When We Were Very Young, a collection of poems, was first published in 1924, followed by Winnie-the-Pooh in 1926. A.A. Milne's lovable children's books follow the adventures of Christopher Robin and his friends, including Winnie-the-Pooh, Piglet, Tigger and Eeyore.

The tales were based on a black bear at London Zoo during World War I named Winnie, who his son Christopher Robin would often go and visit.

In Winnie-the-Pooh we meet Pooh properly. Once upon a time, a very long time ago now, about last Friday, Winnie-the-Pooh lived in a forest all by himself under the name of Sanders. With his friends Piglet, Eeyore and, of course, Christopher Robin, he's never far from an adventure. In this story Pooh gets into a tight place, nearly catches a Woozle and heads off on an 'expotition' to the North Pole with the other animals.

A second collection of poems, Now We Are Six, appeared in 1927 and The House At Pooh Corner was published in 1928. You can now get beautiful classic editions of these books thanks to Farshore. 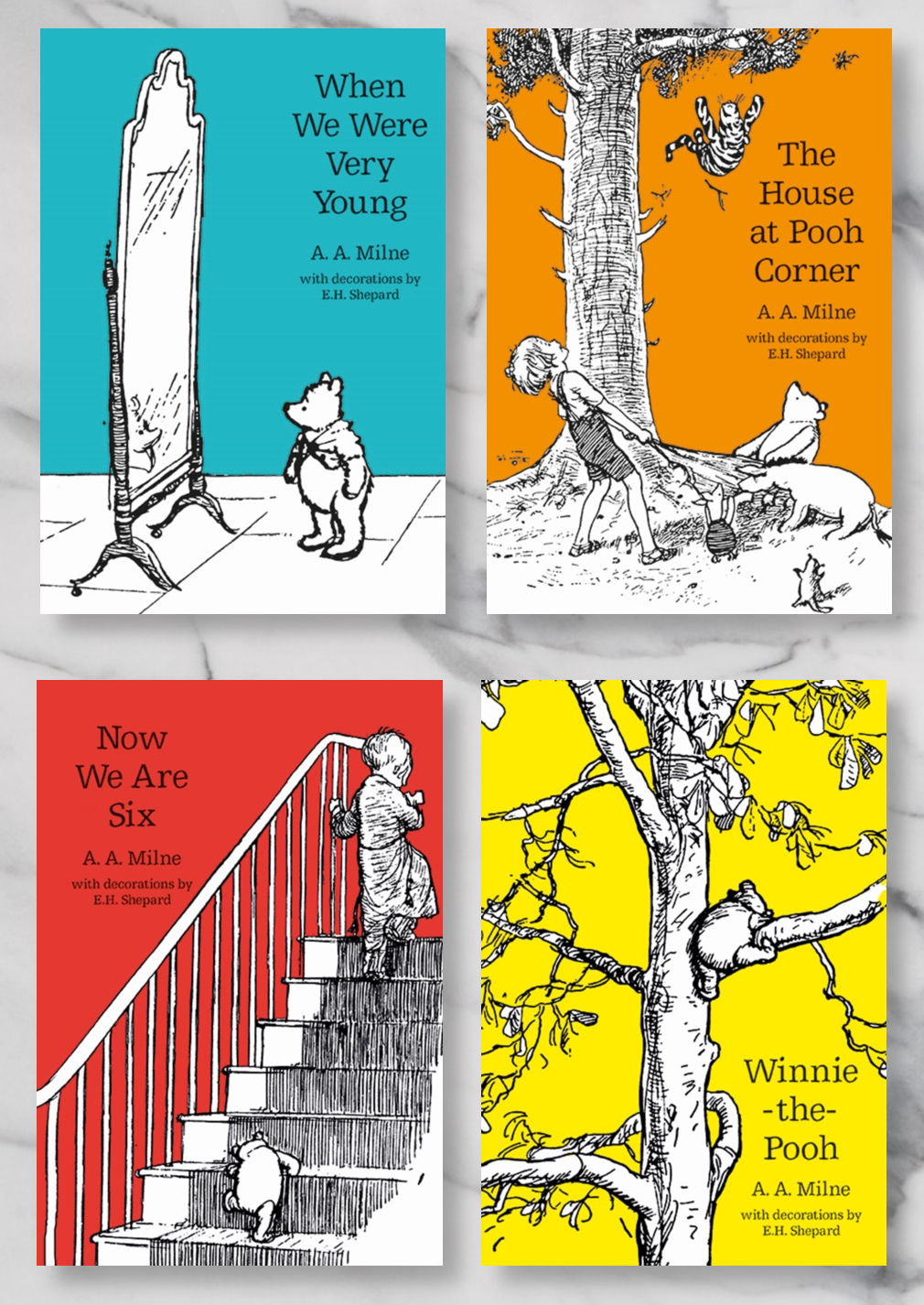 Now We Are Six is a heart-warming and funny introduction to children's poetry, offering the same sense of humour, imagination and whimsy that we've come to expect from these favourite of books. We see childhood through the eyes of six-year-old Christopher Robin: "But now I am Six, I'm as clever as clever. So I think I'll be six now for ever and ever!"

In the second classic children's story collection The House at Pooh Corner, Pooh meets the irrepressible Tigger for the first time, learns to play Poohsticks and sets a trap for a Heffalump.

All four books have been reprinted countless times over the last century, with Winnie-the-Pooh so endearing portrayed by E.H Shepard. Pooh and his friends in the Hundred Acre Wood are very famous and loved by generations of children, and adults alike.

To further celebrate Pooh and his friends, here we have curated a collection of books all about Pooh, right across the age ranges, and right across formats so you have the perfect book for every situation.

This includes Once There Was a Bear that was created in honour of the 95th anniversary of Winnie-the-Pooh, by highly talented author Jane Riordan. It's a wonderful collection of stories, written in the style of A.A. Milne, that take us back to when it all began, when Winnie-the-Pooh was first purchased for baby Christopher Robin. 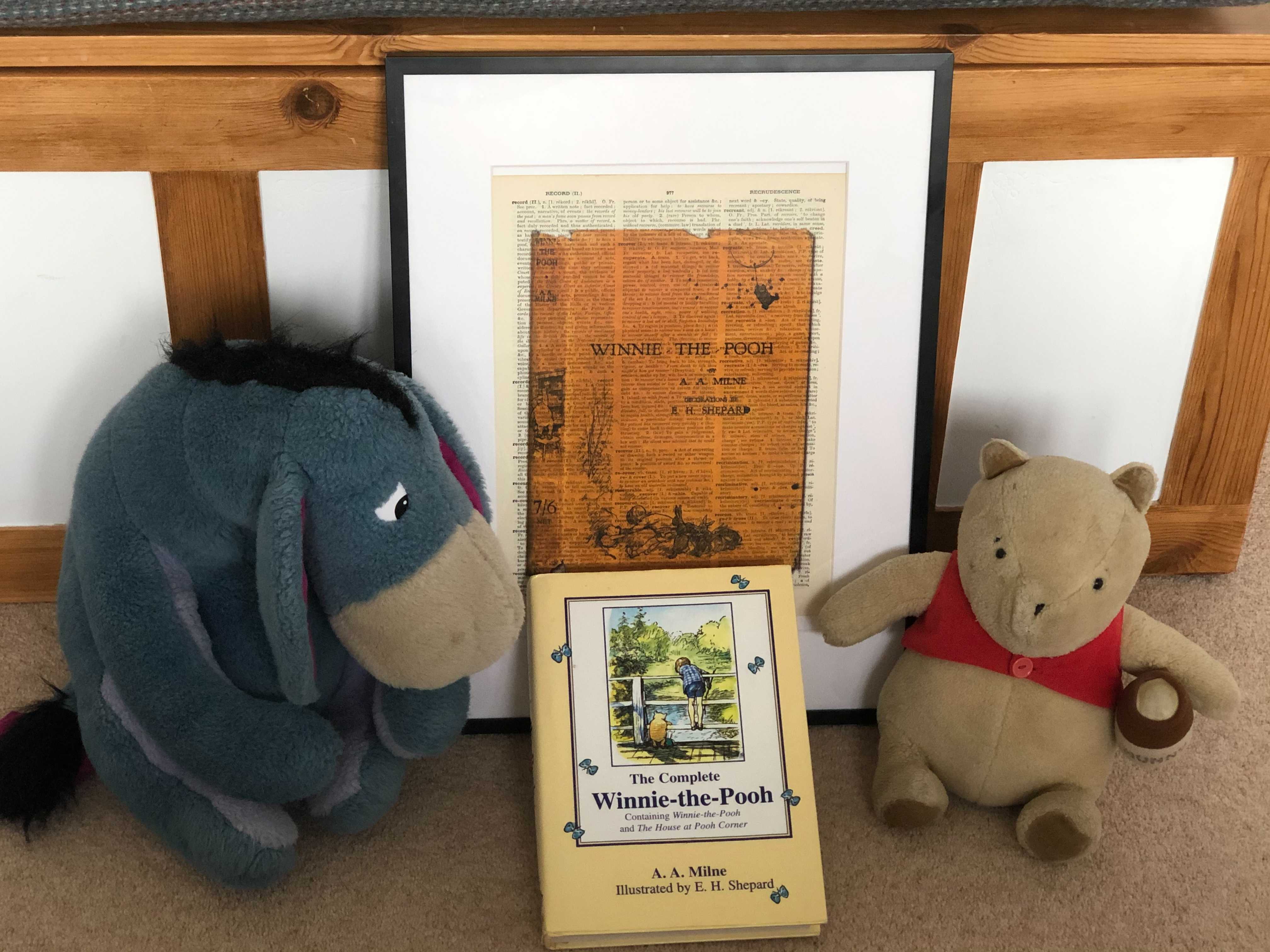 This is the perfect stocking filler for fans of The Bear of Little Brain! It's a very snowy day in the Hundred Acre Wood, and Pooh Bear realises that some of the other animals might be snowed in to their houses. With the help of Piglet, he decides to help all of the other animals clear the snow away - and then it's time for a Little Something! And once they're finished, Christopher Robin shows them all how to make a snowman...

A gorgeous picture book that celebrates everything that is winter for Pooh and Piglet and friends with lovely wintry scenes.  Perfect.

A baby-sized buggy book that lets you join the best-loved Bear Of Little Brain wherever you are.

A Lovereading4kids 'Great read you may have missed 2011' selection. A book that lets you join Pooh on his visit to Rabbit's house - where he gets a little stuck.

This charming collection of stories and poems, selected from A.A.Milne's Winnie-the-Pooh, The House at Pooh Corner, When We Were Very Young and Now We Are Six, tells enchanting tales of Winnie-the-Pooh and his friends, accompanied by E.H.Shepard's beautiful illustrations. It is the perfect timeless bedtime treasury to read before you go to sleep and dream of the adventures to be had in the days to come.

When We Were Very Young

They're changing guard at Buckingham Palace - Christopher Robin went down with Alice. Curl up with A.A.Milne's classic book of poetry for children, When We Were Very Young. This is the first volume of rhymes written especially for children by Milne - as popular now as when they were first written. Featuring E.H.Shepard's original decorations, this collection is a heart-warming and funny introduction to children's poetry, offering the same sense of humour, imagination and whimsy that we've come to expect from Milne's favourite books about Winnie-the-Pooh, that Bear of Very Little Brain.

Milne's classic children's stories - featuring Piglet, Eeyore, Christopher Robin and, of course, Pooh himself - are both heart-warming and funny, teaching lessons of friendship and reflecting the power of a child's imagination like no other story before or since.

When Winnie-the-Pooh sets out to catch a Heffalump he finds himself in a sticky situation. Luckily his loyal friend, Piglet, isn't far away ... But something in his little soul Prevented him from running, And Piglet's voice rose clear and strong, Hold on, Pooh Bear and I'M COMING! ... From the author of Giraffes Can't Dance comes a delightful tale of Heffalumps, deep pits and large jars of honey, inspired by the classic tales of A.A.Milne. Written in rhyme with gorgeous illustrations, The Great Heffalump Hunt is packed with adventure. Pooh ranks alongside other beloved characters such as Paddington Bear, and Peter Rabbit as an essential part of our literary heritage. Whether you're 5 or 55, Pooh is the bear for all ages.

Learn about bees with Winnie-the-Pooh so you can help them too! One hot summer, Winnie-the-Pooh's tummy was grumbling and his cupboard was empty, so he went to find some honey. But the bees in the Hundred Acre Wood weren't making as much honey as they usually would, so Pooh decided to find out all that he could about bees so he could help them. Being a generous sort of bear, Pooh has shared his story together with everything he learnt about bees in this book, so you can help your local bees too!  Winnie-the-Pooh is the perfect character to teach everyone about bees and how we can ALL help them. The BBKA is proud to have assisted Farshore with the making of this book. Anne Rowberry, The British Beekeepers Association Did you know...? Bees can sleep between five and eight hours a day. There are many different types of bees including solitary bees who like to live alone and bumble bees who make the loud buzzing noise bees are famous for. There are more fun bee facts and top bee tips in this book, as well as a beautifully illustrated story about how Pooh and friends help their bees. It also includes a gorgeous poster, so you can spread the important message to Help Our Bees!

This is the ultimate numbered and boxed edition of some of the most famous children's stories and poems of all time, featuring The Bear for All Ages, Winnie-the-Pooh.

90 years after Winnie-the-Pooh first delighted readers, David Benedictus takes us back to the Hundred Acre Wood for more adventures with A.A.Milne's Bear of Very Little Brain. From the excitement of Christopher Robin's return to the curious business of learning to play cricket, Return to the Hundred Acre Wood features all the old friends from Pooh, to Piglet, Eeyore to Owl and Tigger to Rabbit. David Benedictus's authorized sequel to A.A.Milne's original Winnie-the-Pooh stories is splendidly illustrated by Mark Burgess in the style of the original E.H.Shepard decorations. All of the old friends are in attendance. Enjoy the sights, sounds and smells of the Hundred Acre Wood 90 years after since it was first discovered. There's still plenty of fun to be had in this forest.

Winnie-the-Pooh: Once There Was a Bear

Winnie-the-Pooh: Once There Was a Bear

Now We are Six

As famous as nursery classics in their own right. This is an unforgettable evocation of childhood, through the eyes of Christopher Robin.

The Complete Collection of Stories and Poems

Winnie the Pooh: the Complete Collection of Stories and Poems