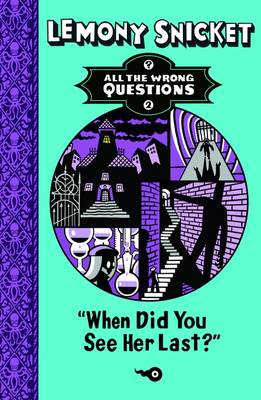 When Did You See Her Last?

The second in the highly anticipated new series by Lemony Snicket, the enigmatic author of the bestselling A Series of Unfortunate Events. The series reveals how a young Lemony Snicket, in a fading town, far from anyone he knew or trusted, began an apprenticeship in a secret organisation. This time he must find a missing girl.

When Did You See Her Last? Synopsis

In the fading town of Stain'd-by-the-Sea, young apprentice Lemony Snicket has a new case to solve when he and his chaperone are hired to find a missing girl. Is the girl a runaway? Or was she kidnapped? Was she seen last at the grocery store? Or could she have stopped at the diner? Is it really any of your business? These are all the wrong questions.

Book 1, Who Could That be at This Hour

Book 3, Shouldn't you be in school?

Snicket’s A Series of Unfortunate Events has sold over 60 million copies worldwide and has been translated into 39 languages.

'Better than ever' Independent

'A must for SOUE fans and converts' Daily Mail