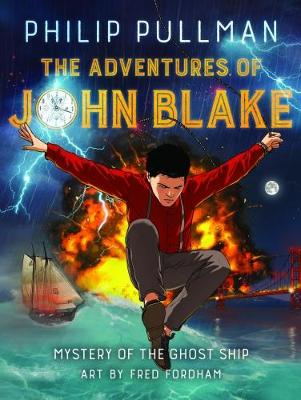 The Adventures of John Blake Mystery of the Ghost Ship

A Julia Eccleshare Pick of the Month June 2018 |

Master story-teller Philip Pullman is as brilliantly creative in this gripping, multi-narrative graphic novel story as ever. In an adventure which both pays homage to the best-traditions of the past and dashes into the future so enabling it to give an interesting commentary on our own time, Pullman’s lively cast of characters travel through time and place. At the centre of the adventure is a mysterious ghost ship, the Mary Alice, crewed by men from all times including ancient Rome, the seventeenth century and the present. But someone in the present is desperate to get their hands on the boat and will stop at nothing to do so. When contemporary teenager Serena falls from the family yacht she is rescued by crew member John Blake. How can he evade the present day evil and return her safely to her family? Pullman’s brevity and storytelling power are superbly realised in Fred Fordham’s atmospheric and equally taut illustrations. With the sea at the heart of them all, they conjure up the different times and places of the several narratives and define the characters in them. The result is a delight of a book for readers of all ages.

The Adventures of John Blake Mystery of the Ghost Ship Synopsis

Far out at sea, and hidden by the mists of time, sails the Mary Alice and her crew - searching for a way home. But the mysterious ship is being hunted by a villain who will go to ANY lengths to track them down... Join John Blake and the crew on an unforgettable time-travelling adventure.

`a fast-paced, action-packed comic with a plot sure to ensnare the thrill-seeking younger reader'  TORCH comics

Philip Pullman one of the most acclaimed writers working today.

He is best known for the His Dark Materials trilogy (Northern Lights, The Subtle Knife, The Amber Spyglass), which has been named one of the top 100 novels of all time by Newsweek. He has also won many distinguished prizes, including the Carnegie Medal for Northern Lights (and the reader-voted ‘Carnegie of Carnegies’ for the best children’s book of the past seventy years); the Whitbread (now Costa) Award for The Amber Spyglass; and the Astrid Lindgren Memorial Award, in honour of his body of work. The first volume of Philip Pullman’s long-awaited trilogy The Book of Dust, set in the same world as His Dark Materials, published in 2017, and the second volume followed in 2019.

Julia Eccleshare's Picks of the Month for June 2018:

Mariella, Queen of the Skies by Eoin Colfer

The Hippo at the End of the Hall by Helen Cooper

The Adventures of John Blake: Mystery of the Ghost Ship by Philip Pullman