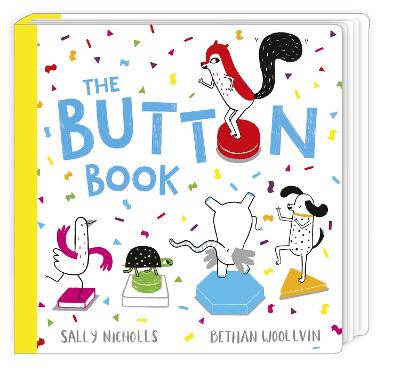 "From a singing button to a tickle button, from a rude sound button to a mysterious white button, there's only one way to find out what they do..."

There’s huge fun to be had in this gloriously interactive book which is a spur to imaginative play as well as a great introduction to familiar colours and shapes. A singing button, a tickle button and many more. All young readers will be delighted by the invitation to press each one. Once they have done so many possibilities open up as they head off into whatever invention they choose to imagine. Sally Nicholls uses her word carefully and with pleasing simplicity and Beth Woollvin’s illustrations add special details of their own.

Here's a button. I wonder what happens when you press it?

From a singing button to a tickle button, from a rude sound button to a mysterious white button, there's only one way to find out what they do! A remarkable adventure powered purely by imagination, where the sounds, songs and play are completely up to you and whoever you're sharing this wonderful book with.

Reminiscent of picture book legend Herve Tullet's Press Here, this chunky board book will take you on a magical journey of colour, imagination, and play with a wind-down bedtime ending (unless you're asked to read it again).

Bouncy and mischievous, Sally Nicholls's The Button Book is illustrated with giddy, infectious energy by Bethan Woollvin - Guardian, Children's Books of the Year

This beautifully simple concept takes readers on a magical interactive journey, powered only by imagination and play. Fresh and charming, with lots of scope for children-and adults-to join in. - The Bookseller

Nicholls' simple, silly narrative and Woollvin's colorfully childlike illustrations result in a fun picture book that incorporates shapes and colors and that can be used at home and in libraries and classrooms. - Kirkus

Each button is made distinct by a specific setting and palette, with Woollvin-an exceptional colorist-utilizing one hue at a time to highlight her black-and-gray illustrations, which makes for dynamic visuals as the pages go by. - Booklist 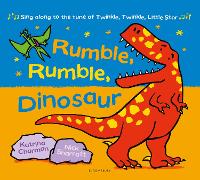 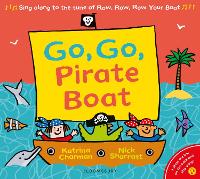 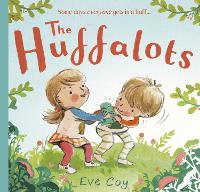 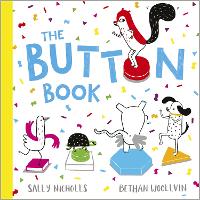 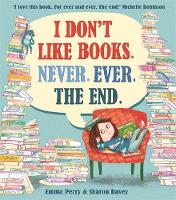 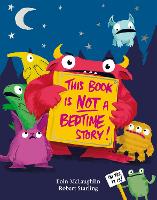 This Book is Not a Bedtime Story

Funny and giggly. I loved it!

I really liked this book because it was so funny. There are lots of animals and they all press different buttons to see what they do. My favourite button was the green button because it was a bit rude and that made me laugh! Thank you, I really like this book and think everyone should read it.

Mum - there were a lot of giggles when reading this book! A simple concept, but very effective. My 5 year old enjoyed reading this himself, but younger children will enjoy this being read to them.

A simple but brilliant idea!

This book is guaranteed to make kids of all ages feel fantastic. The joining in with noises and actions is addictive and the kids understood the game quickly and were so excited to see what the next button would do! Lots of laughter for even the smallest toddlers.

What a lovely book! This will make a great bedtime story for younger children.

The Button Book started off as a simple picture book with cute characters but along the way it became interactive requiring actions from my daughters. Abidah who is five, loved doing all the actions and ‘pressing’ all the buttons in the illustrations.
The last button makes this a great book to read at bedtime because as I’ve read the last page I can leave the girls in bed as the book instructs!

The colourful illustrations are eye-catching and lift this book.