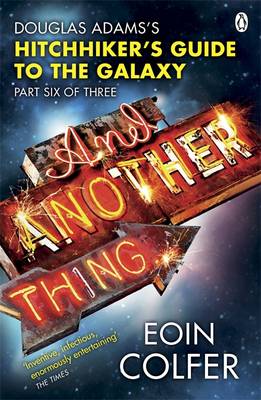 And Another Thing ... Douglas Adams' Hitchhiker's Guide to the Galaxy: Part Six of Three

And Another Thing, the 6th book in the Hitchhiker’s trilogy, or rather ‘double trilogy’ as it has now become, has been written by the brilliantly funny Eoin Colfer, international number-one bestselling author of the Artemis Fowl novels. Colfer is not unaccustomed to strange going-ons and far-fetched story-lines with his celebrated Artemis Fowl novels.

The widow of Douglas Adams, Jane Belson, said of Eoin Colfer, “I love his books and could not think of a better person to transport Arthur, Zaphod and Marvin to pastures new.”

Eoin Colfer has been a fan of Hitchhiker since his schooldays.

All this hitching and adventuring went on for five books and then Douglas Adams passed away before he could write book six. Hitchhiker has been heard on radio, seen on tv and enjoyed on the cinema screen, there was even a musical version. But the story could never end, until now. I am going to continue on where Douglas left off. Unfortunately for me, he left off on rather a large cliffhanger. Everyone was dead. Which means I have rather a large challenge ahead of me, but it is one I am looking forward to.

It will be called And Another Thing. And I really hope you will board the spaceship with me so we can travel through Douglas Adams’ hilarious galaxy together.”

And Another Thing ... Douglas Adams' Hitchhiker's Guide to the Galaxy: Part Six of Three Synopsis

And Another Thing ... will be the sixth novel in the now improbably named Hitchhiker's Guide to the Galaxy trilogy. Eight years after the death of its creator, Douglas Adams, the author's widow, Jane Belson, has given her approval for the project to be continued by the international number one bestselling children's writer, Eoin Colfer, author of the Artemis Fowl novels. Douglas Adams himself once said, 'I suspect at some point in the future I will write a sixth Hitchhiker book. Five seems to be a wrong kind of number, six is a better kind of number.' Belson said of Eoin Colfer, 'I love his books and could not think of a better person to transport Arthur, Zaphod and Marvin to pastures new.' Colfer, a fan of Hitchhiker since his schooldays, said, 'Being given the chance to write this book is like suddenly being offered the superpower of your choice. For years I have been finishing this incredible story in my head and now I have the opportunity to do it in the real world.' Prepare to be amazed...

Both Eoin Colfer’s parents were teachers and young Eoin was taught by his dad Billy at Wexford’s Christian Brothers primary. Eoin remembers his dad’s presence in school as “witty…[he] made school fun.” Colfer junior’s first attempt at serious writing came in the sixth grade. “I wrote a play for the class about Norse Gods. Everyone died in the end except me.”

Eoin followed in his parents’ footsteps and trained to be a teacher but his writing didn't stop and his first book, Benny and Omar, appeared in 1999 and instantly achieved bestselling status in Ireland. Then in 2001 the first Artemis Fowl book was published and he was able to resign from teaching and concentrate fully on writing.

Apart from the hugely successful Artemis Fowl series his books include The Legend of the Worst Boy in the World, And another thing.... and his most recent adventure novel W.A.R.P.: The Reluctant Assassin.

Eoin Colfer was nominated for the 2012 Hans Christian Andersen Award.

WHAT THEY SAY ABOUT EOIN COLFER... Praise for Artemis Fowl

“Wildly original… and you thought fairy stories were just for kids.” - T2 (The Telegraph)

“It’s a highly original adventure story with an action-packed plot which twists and turns right to the end – a kind of William Gibson meets the Hobbit/Irish Legends. It has all the right ingredients.” Marc Lambert, Children’s Programme Director at the Edinburgh Festival

“Make sure you buy it!” Denise Van Outen, Channel 4’s The Big Breakfast

More About Eoin Colfer
Add To Wishlist
Buy from our bookstore and 25% of the cover price will be given to a school of your choice to buy more books.