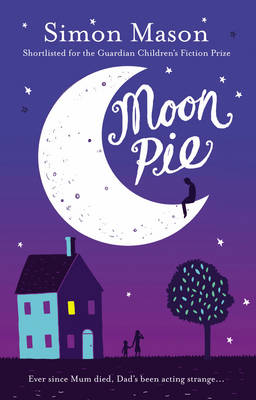 April 2012 Book of the Month. As touching a story as its title suggests, Moon Pie is deft and witty in how it tells the story of Martha, who tries to cope with her father’s increasingly erratic and unpredictable behaviour after her mother dies. Older than her years, Martha is very sensible; dealing with his oddities as well as caring for her small brother Tug seems not much stranger to her than her friend Marcus’s obsession with Hollywood movies. But finally, even for her, it is all just a bit too much. How Martha, Dad, Tug, the grandparents as well as Marcus and his family all move to a surer grip on life is beautifully told in a story that is long in affection and short on preaching or problem-solving.

Eleven-year-old Martha is used to being the one who has to keep her head. Tug, her little brother, is too small. Dad is too strange. And Mum's not here any more. So when Dad falls off the roof, it's Martha who ices his knee and takes him to the doctor. And when Dad doesn't come home, it's Martha who cooks Tug's favourite pie and reads him his bedtime story. And when Dad passes out, it's Martha who cleans him up and keeps his secret. But eventually Dad's problems become too big for even Martha to solve. There is only one person who can sort things out now. Dad.

'Mason avoids all the potential pitfalls, and instead has written a subtle book that is very moving at times .. but also full of wit, life and, above all, love. [This book] deserves to be read.' Marcus Sedgwick in The Guardian

‘Outstanding... this is a book that addresses painful events with a wonderfully ebullient comic touch... it's Mason's gift for the way that people, especially children speak and think that makes the book gripping and absorbing’ - Amanda Craig, The Times

‘Simon Mason's Moon Pie is an absolute delight. It is honest, and tackles a difficult subject - the descent into alcoholism of a man who has lost his wife - with great wit.’ Philip Womack, The Telegraph

‘Candid and humorous...Moon Pie is a moving tale of the serious side of life.’ Dale Berning, The Observer

Simon has always been fascinated by crime novels and grew up reading the stories of Arthur Conan Doyle, Raymond Chandler and Agatha Christie.

To this day, he continues to be mesmerised by their most famous detectives: Sherlock Holmes, Philip Marlowe and Hercule Poirot.  These are the characters who inspired Simon to write his first crime novel, Running Girl, introducing Garvie Smith, a young man with a brilliant brain and an obvious reluctance to use it responsibly.  Maths was a subject Simon struggled with at school – so he made Garvie a maths genius.

He also asked himself: what makes a really good crime novel, what keeps readers hooked until the very end?  And he answered: 1) a totally gripping story full of mystery, danger and foul deeds, 2) a charismatic detective, and 3) a vivid sense of place.  This is what he always aims for in his own writing.

Simon lives in Oxford, the city of another very famous detective, Inspector Morse, and he is currently writing another Garvie Smith Mystery.

More About Simon Mason
Add To Wishlist
Buy from our bookstore and 25% of the cover price will be given to a school of your choice to buy more books.