The Great American Novel of love and betrayal in the Jazz Age is now a major film. 'I believe that on the first night I went to Gatsby's house I was one of the few guests who had actually been invited. People were not invited - they went there.' Jay Gatsby's opulent Long Island mansion throngs with the bright young things of the Roaring Twenties. But Gatsby himself, young, handsome and mysteriously rich, never appears to his guests. He stands apart from the crowd, yearning for something just out of reach - Daisy Buchanan, lost years before to another man. One fateful summer, when the pair finally reunite, their actions set in motion a series of events that will unravel their lives, bringing tragedy to all who surround them. Widely considered F. Scott Fitzgerald's masterpiece, The Great Gatsby is a tale of excess and obsession, and a work of classic twentieth-century American literature.

Regarded as one of the most celebrated writers of the American 20th century, Fitzgerald's gift was his ability to capture the very essence of the American experience in his writing, with his most famous novel The Great Gatsby, lauded as a classic even today. 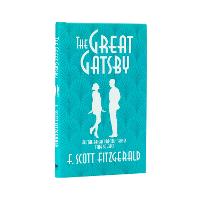