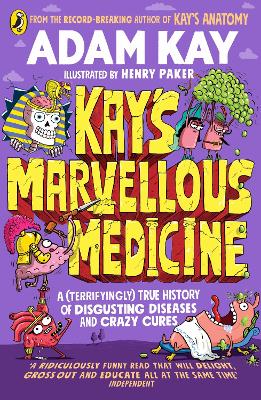 The brand-new, hilarious book from bestselling, record-breaking author Adam Kay. The olden days were pretty fun if you liked wearing chainmail or chopping people's heads off but there was one TINY LITTLE problem back then . . . doctors didn't have the slightest clue about how our bodies worked. It's time to find out why Ancient Egyptians thought the brain was just a useless load of old stuffing that might as well be chucked in the bin, why teachers forced their pupils to smoke cigarettes, why hairdressers would cut off their customers' legs, and why people used to get paid for farting. (Unfortunately that's no longer a thing - sorry.) You'll get answers to questions like: Why did patients gargle with wee? How did a doctor save people's lives using a washing machine, a can of beans and some old sausages? What was the great stink? (No, it's not what doctors call your bum.) If you're sure you're ready, then pop a peg on your nose (there was a lot of stinky pus back then), pull on your wellies (there was a lot of poo there too), wash your hands (because they certainly didn't) and explore this gross and gruesome history of the human body! Praise for Kay's Anatomy: 'An enjoyably gross look at the human body. Hours of gruesome fun guaranteed' i 'Like listening to a teacher who makes pupils fall about' Sunday Times 'Totally brilliant!' Jacqueline Wilson 'Fun and informative' Malorie Blackman 'Very funny - this exciting book is bound to inspire the next generation of medics' Sunday Express

Adam Kay is an award-winning writer and former non-award-winning junior doctor. His first book, This is Going to Hurt: Secret Diaries of a Junior Doctor, was a Sunday Times number-one bestseller for over a year and has sold over 2.5 million copies. It has been translated into 37 languages, was the winner of four National Book Awards, including Book of the Year, and has been adapted into a major comedy drama for BBC/AMC starring Ben Whishaw. His second book, Twas the Nightshift Before Christmas, was an instant Sunday Times number-one bestseller and sold over 500k copies in its first few weeks. His compilation, Dear NHS, raised over GBP400k for charity. His new memoir Undoctored: The Story of a Medic Who Ran Out of Patients is published in September 2022. His first children's book, Kay's Anatomy, was published in October 2020 and became the fastest-selling children's general non-fiction hardback of the decade and rights across Kay's Anatomy and Kay's Marvellous Medicine have now been sold in 28 languages.

More About Adam Kay
Add To Wishlist
Buy from our bookstore and 25% of the cover price will be given to a school of your choice to buy more books.