Friendship According to Humphrey

Friendship According to Humphrey Synopsis

Dear Friends, When Og the Frog came to live in Room 26, I felt a little jealous. Still, I tried to be welcoming but I soon discovered that it's HARD-HARD-HARD to make friends with a lumpy, bumpy frog! Then I found out that my fellow students were having problems with their friends, too. A.J. and Garth had to deal with a bully named Mean Martin Bean. Heidi and Gail had a terrible argument, and Miranda-Golden had a new stepsister who wasn't nice at all. Then there was the Poetry Festival, the magic show and the snowstorm! How could one small hamster solve all those problems? Luckily, I wrote the whole story in my notebook so you could share in my adventures. Your friend to the end, Humphrey.

Betty G. Birney has written episodes for many children's television shows and is the author of over twenty-five picture books. Her work has won many awards, including an Emmy and three Humanitas prizes. She lives in America with her husband and son. 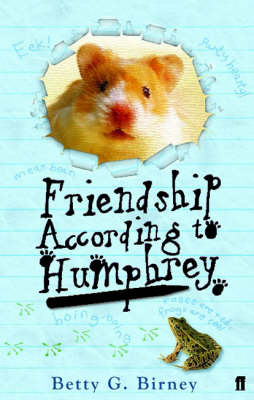