The Illustrated Letters of Richard Doyle to His Father, 1842-1843

Part of the Series in Victorian Studies Series

The Illustrated Letters of Richard Doyle to His Father, 1842-1843 Synopsis

Before he joined the staff of Punch and designed its iconic front cover, illustrator Richard Dicky Doyle was a young man whose father (political caricaturist John Doyle) charged him with sending a weekly letter, even though they lived under the same roof. This volume collects the fifty-three illustrated missives in their entirety for the first time and provides an uncommon peek into the intimate but expansive observations of a precocious social commentator and artist. In a series of vivid manuscript canvases, Doyle observes Victorian customs and society. He visits operas, plays, and parades. He watches the queen visiting the House of Commons and witnesses the state funeral of the Duke of Sussex. He is caught up in the Chartist riots of August 1842 and is robbed during one of the melees. And he provides countless illustrations of ordinary people strolling in the streets and swarming the parks and picture galleries of the metropolis. The sketches offer a fresh perspective on major social and cultural events of London during the early 1840s by a keen observer not yet twenty years old. Doyle's epistles anticipate the modern comic strip and the graphic novel, especially in their experimentation with sequential narrative and their ingenious use of space. The letters are accompanied by a full biographical and critical introduction with new material about Doyle's life.

The Illustrated Letters of Richard Doyle to His Father, 1842-1843 Press Reviews

Scott's collection of illustrated letters from the hand of Richard Doyle, the fascinating but neglected contributor to Punch magazine, are a goldmine. Accompanied by an excellent editorial apparatus, the letters provide a revealing glimpse into the lives of a Victorian family steeped in the arts in the early 1840s. -- Bernard Lightman, York University In recovering the fascinating illustrated letters that Richard Doyle wrote to his father leading up to the work with Punch, Grant Scott gives us access to both the visual virtuosity and the psychological depth of one of the most brilliant and inventive of Victorian graphic artists. -- Juliet McMaster, distinguished university professor emerita, University of Alberta Across more than 300 pages of archival material, analysis, and annotation, Scott takes us back to early 1840s England via the prose and art of Doyle himself and the incisive scholarship of a standout professor of English literature and Victorian culture. The result is a triumph for the editor and his publishers and a boon for students of Victorian Studies. Great service has thus been done to a still under-appreciated artist, his world, and the remarkable dynasty of illustrators, cartoonists, satirists, and scholars, to which he belonged....The volume helps to reaffirm what David Kunzle suggested over two decades ago (in The History of the Comic Strip, Volume 2: The Nineteenth Century): that the modern comic strip and the graphic novel originate from the unpublished work of artists like Doyle, who experimented with text and image in new and innovative ways. -- Richard Scully This beautifully presented book contains for the first time the complete series of fifty-three illustrated letters written to his father by Richard Doyle, the 'precocious boy' who would become famous for his Punch drawings [...] Their reproduction here in all their elusive detail, scrupulously annotated by the editor, is both pleasurable and educative.

Grant F. Scott is a professor of English at Muhlenberg College. He is the author of The Sculpted Word: Keats, Ekphrasis, and the Visual Arts, the editor of Selected Letters of John Keats, Joseph Severn: Letters and Memoirs, and with Sue Brown, New Letters of Charles Brown to Joseph Severn. 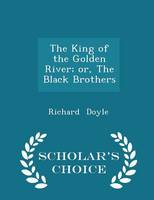 View All Books By Richard Doyle