Terry Pratchett's The Amazing Maurice and his Educated Rodents

Part of the Collins Musicals Series

Terry Pratchett's The Amazing Maurice and his Educated Rodents Synopsis

Sir Terry Pratchett's ingeniously upended tale of the Pied Piper, has a roving band of highly intelligent rats as its heroic protagonists. Matthew Holmes' script and songs capture the plot in a captivating musical for children to perform and everyone to enjoy. Under the lazily, streetwise command of Maurice, a speaking cat, the rats prepare to pull their practiced scam on the town of Bad Blintz. But something's up and our heroes are scampering straight into someone else's scam - and it's not nice. Perfect for upper primary school performances, there are parts small and large for rats - heroic, villainous and oppressed - for humans on the good side and the bad, and of course for a cat named Maurice. The complete performance pack with its photocopiable script and piano vocal score includes everything you need for rehearsing and presenting the final show, plus there's full audio support on CD so you don't need to read a note of music. To present a public performance of this musical you will need a performance licence. Simply email education@harpercollins.co.uk or phone 01484 668 148 and request a Performance Licence Application Form.

Perfect for upper primary performances, there are parts small and large for heroes and villains!,A&C Black has thought of everything needed to make the resource attractive and easy to use - from the handy scene illustrations to the advice about costumes and production... Composer, Matthew Holmes, is an expert with catchy melodies and well-chosen lyrics with a wide range of influence from rap to Riverdance.,wonderfully captivating and brilliantly witty

Sir Terry Pratchett OBE has written 38 novels in the Discworld series, the last 33 all reached no 1 in the best seller lists. In all, he has written 49 books and co-authored about 50 more. His novel Nation, for young adult readers, was adapted for the Royal National Theatre and staged in 2009. He was knighted in the 2009 New Year's Honour List 'for services to literature'. The original novel of The Amazing Maurice and his Educated Rodents was the winner of the 2001 Carnegie Megal. Matthew Holmes is an experienced children's music educator, professional musician and writer based in the UK. His works include the Christmas ... 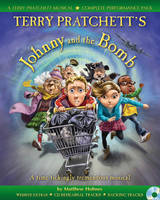