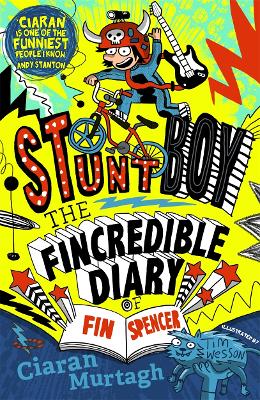 The Fincredible Diary of Fin Spencer

A boy, a book and a bucket of trouble... Fin Spencer is not the sort of boy who writes in a diary. But when he's given one by a batty old lady at a funfair, he writes in it anyway. He's going to be a famous stuntboy one day, and then he can sell his memoirs and make loads of money! But Fin soon realises it's not a normal kind of diary - it can change the past! So when Fin writes what he SHOULD have done that day (rather than what actually happened) what he SHOULD have done is what everyone remembers. To start with, it's great! By changing what he did, Fin stands up to the school bully and ends up winning the school talent show. But he gets into lots of scrapes while he works out exactly what the diary is capable of changing and what it's not. And even then things backfire - so Fin falls out with his best friend and ends up at a Charlie Dimples concert with a load of six-year-old girls listening to 'My Swishy Wishy'! Can Fin control the diary, or will it control him? This is the first in a hilarious new series by Ciaran Murtagh, a rising star of comic children's fiction, wonderfully illustrated by Tim Wesson.

Ciaran Murtagh is a writer and actor. Andy Stanton has said 'Ciaran is one of the funniest people I know!' (and Andy Stanton knows at least two people). His first book, Dinopants, was published in 2009 and spawned three sequels - one more than Toy Story. He also writes TV shows and has recently been involved with scripting The Amazing World of Gumball, Boyster, Mr Bean, Shaun the Sheep, The Slammer, Treefu Tom, Dennis and Gnasher, DNN and The Legend of Dick and Dom. His latest adult sitcom is currently optioned by Hat Trick. Ciaran regularly appears on CBBC and can be seen in Dick and Dom's Hoopla and in The Slammer. Ciaran lives in London. Find out more about Ciaran at www.ciaranmurtagh.com or follow him on Twitter @CiaranMurtagh Tim Wesson is an illustrator and author who draws in different styles for both children and adults and has recently written and illustrated the MEGA MASH-UP series, published by Nosy Crow, for children aged 6-9. His latest book in the series is called Cowboys v Trolls in the Arctic.

More About Ciaran (Author) Murtagh
Add To Wishlist
Buy from our bookstore and 25% of the cover price will be given to a school of your choice to buy more books.