Book Band: Turquoise Ideal for ages 6+ | There’s a warm-hearted, creative, independent little girl at the centre of this story and beginner readers will really enjoy following her adventure. Cavegirl Aggie wants to get a special present for her mum’s birthday and when she hears that a villager has found a piece of amber, she knows it will make the perfect gift.  She carefully works out how to make something to trade for the amber, and everything goes to plan until a surprise encounter with a wild boar. There are two more twists in the plot before the happy ending, one of them told entirely through the pictures.  Short chapters, a lively storyline plus lots of bright, attractive pictures make this an excellent book for children ready to read on their own. Part of Bloomsbury’s Young Readers series, specially designed with this audience in mind, it also features useful tips and discussion points for adults sharing the book with children.

A powerful, poignant, darkly comic and deeply moving story about friendship at its most extraordinary.

Longlisted for the UKLA Book Awards 2020 | At once fierce and otherworldly, this impeccably produced full-colour reinvention of Moby Dick sees multi-award-winning Patrick Ness display a talent for writing that transcends age barriers. It reimagines Moby Dick from the viewpoint of a pod of whales led by Bathsheba who, “like all whales, [I] hated men, and with good reason: their bloody killings, their sloppy, wasteful harvesting proving that they killed as much for sport as for need”. And so fulfilling her grandmother’s prophecy, Bathsheba and her pod live for the hunt. Led by Captain Alexandra they find themselves in pursuit of the notorious Toby Wick, whom no one has seen, but who’s reputed to be “a devil.” As fierce battles are fought and blood is shed, questions are raised about the dangers of power and rumour to create a strange and elemental allegory that’s exquisitely enhanced by Rovina Cai’s arresting full-page illustrations.

The Three Hares: The Jade Dragonball

Sara’s fantastical journey begins during a school trip to the Beijing Palace Museum when she’s shot back in time from present-day Beijing and finds herself inside the thousand-year-old Qingming scroll. In this time zone Sara meets an old man who warns her that the Gang of the White Fawn will kill them both if she doesn’t do as he says, namely deliver his saddlebag to a silk merchant called Wan Yi. While encountering famous fortune-tellers, storytellers and Imperial doctors, Sara draws on the wisdom of her grandmother’s stories to navigate her way through the gathering forces of ancient magic as she’s tasked by the Immortals to find the second and third hares to add to the first they present her with. The evocation of the ancient world is vibrant throughout, with a cinematic depiction of natural landscape and legend, and a strong sense of tension and peril intensifying as the novel progresses. The authors’ passion for ancient Chinese culture and love of fantasy is abundantly apparent.

The Three Hares: The Jade Dragonball

Sara’s fantastical journey begins during a school trip to the Beijing Palace Museum when she’s shot back in time from present-day Beijing and finds herself inside the thousand-year-old Qingming scroll. In this time zone Sara meets an old man who warns her that the Gang of the White Fawn will kill them both if she doesn’t do as he says, namely deliver his saddlebag to a silk merchant called Wan Yi. While encountering famous fortune-tellers, storytellers and Imperial doctors, Sara draws on the wisdom of her grandmother’s stories to navigate her way through the gathering forces of ancient magic as she’s tasked by the Immortals to find the second and third hares to add to the first they present her with. The evocation of the ancient world is vibrant throughout, with a cinematic depiction of natural landscape and legend, and a strong sense of tension and peril intensifying as the novel progresses. The authors’ passion for ancient Chinese culture and love of fantasy is abundantly apparent.

Mimi and the Mountain Dragon

Michael Morpurgo and Helen Stephens' classic Christmas story, now in a brand-new larger gift format - the perfect Christmas gift! High in the mountains of Switzerland, lives a terrible dragon. In the village below, the people do everything they can to keep the dragon away. But one day, a little girl called Mimi finds a baby dragon. The little creature is lost and frightened but how did he get there and what if his mother comes looking for him? Mimi must be extremely brave if she is going to help the little dragon find his way home . . . A wonderful story about friendship, courage and adventure, perfect for sharing with the whole family.

Interest Age Teen Reading Age 8 | Elizabeth Wein’s thrilling new World War II story stars a young Polish pilot – a female one. Kristina Tomiak and her twin brother are members of the White Eagles, Poland’s air force, and at the forefront of their country’s resistance when the Nazis invade.  Things quickly turn bad and Kristina is forced to flee in her RWD-8 plane, together with an unexpected passenger. As she makes her escape, her destination changes until finally she is heading towards England. The story is full of excitement and gives readers a broad yet detailed understanding of those early days of the war, and of flying a plane too. Published by Barrington Stoke this is written to be accessible to all readers including those with dyslexia but I recommend it to any reader fascinated by history and the brave individuals who make it.

August 2019 Book of the Month | Climbing up into Andy Griffith’s and Terry Denton’s ever-growing treehouse guarantees a burst of brilliant, zany, fast-moving comic adventure.  In this episode – which picks up on their World Book Day mini-book – illustrator Terry gets to be the narrator, with some alarming results.  Indeed, Andy is forced to rescue them by using the old ‘it was all a dream’ ending, which in turn leads to them being pursued and arrested by the Story Police. As always, the story is told through a combination of words and pictures, both equally inventive, entertaining and surreal. It’s no wonder that these stories are so loved by readers, long may the treehouse continue to sprout new storeys.

A House Without Walls

A Julia Eccleshare Pick of the Month September 2019 | | Award winning Elizabeth Laird brilliantly brings to life thirteen year old Safiya’s new world as a refugee after her family flee from their comfortable home in Damascus because of the war in Syria. Safiya, her brother and father arrive in Jordan with nothing and must turn to relatives for help. Safiya has to adjust to living in a tent without running water. Suddenly, she is cleaning and washing and finding clever ways of making do on very little rather than going to school. But resourceful Safiya never gives up hope of going back to a better way for life or of finding her missing twin sister. A House without Walls is a vivid picture of a family facing an extreme experience with courage and imagination.

The Legend of Kevin: A Roly-Poly Flying Pony Adventure

Longlisted for the UKLA Book Awards 2020 | Shortlisted for the Laugh Out Loud Book Awards 2020 | A deliciously dotty fantasy in which almost anything becomes believable. Max longs for a pet but even in his wildest dreams he had never thought that the pet might be a flying pony. But, one stormy night and with a loud Doof!, Kevin turns up on Max’s balcony. Kevin is a flying horse who can also talk. He has few demands except that he needs a constant supply of biscuits – especially custard creams. Soon Max and Kevin are an unstoppable duo putting right all the things that are going wrong in a town surrounded by storm water and besieged by naughty sea-monkeys. It’s all pell-mell action and madcap fun.

Dog Man 7: For Whom the Ball Rolls

Howl with laughter with the SEVENTH book in the hilarious full-colour, illustrated series, Dog Man, from the creator of Captain Underpants! The Supa Buddies have been working hard to help Dog Man overcome his bad habits. But when his obsessions turn to fears, Dog Man finds himself the target of an all-new supervillain! Meanwhile, Petey the Cat has been released from jail and starts a new life with Li'l Petey. But when Petey's own father arrives, Petey must face his past to understand the difference between being good and doing good. Dav Pilkey's wildly popular Dog Man series appeals to readers of all ages and explores universally positive themes, including: empathy, kindness, persistence, and the importance of being true to one's self. Full-colour pages throughout. OTHER BOOKS IN THE SERIES Dog Man (book 1) Dog Man: Unleashed (book 2) Dog Man: A Tale of Two Kitties (book 3) Dog Man and Cat Kid (book 4) Dog Man: Lord of the Fleas (book 5) Dog Man: Brawl of the Wild (book 6) Dog Man: Fetch-22 (book 8)

A stunningly original ocean adventure by a one-of-a-kind author whose work defies convention and abounds with a purity of ideas and execution. Kel was “always running away from something”, seeking escape “from the world she inhabited within and the world that bullied her from the outside”. She’s a swamper, born oceans apart from the wealthy tower people who live in the same Cornish coastal community. She’s also an unforgettable heroine, a girl with danger in her eyes, a baby to care for and “a stupid heart that beat wrong and was shaped wrong and had wrongness stretched clean through it”. Kel “didn’t want what the tower people had; she only wanted two things, a heart she could rely on and freedom from kin”, which is why she kidnaps Rose, the daughter of a cargo ship captain. Kel plans to use her ill-gotten gains to travel to South America to have a heart operation, because in the UK “swamp folk don’t get operations”. Aboard the ship Kel tracks down Rose and forces her to board a smaller vessel, soon running into trouble when the engine fails amidst scenes of devastation on the mainland. Steering clear of well-worn clichés, Carthew’s stories cut to the heart of human experience, often portraying and championing life’s underdogs and outsiders. What a thrilling, thought-provoking novel this is, brimming with perilous encounters, and the rawness of real-life relationships.

Top marks again for Robin Stevens: her excellent 1930s set crime series just gets better and better.  After various adventures, schoolgirl detectives Daisy Wells and Hazel Wong are back at the boarding school they love, but almost before you can say ‘Agatha Christie’ a dormmate claims to have witnessed a murder, with sudden death striking in the heart of Deepdean School itself. As the plot unfolds, all sorts of tensions and insecurities come to light, and even the normally unassailable Daisy seems suddenly vulnerable. Scrupulously researched, carefully plotted and as good on friendships and family relationships as it is on clues and red herrings this is top quality reading. 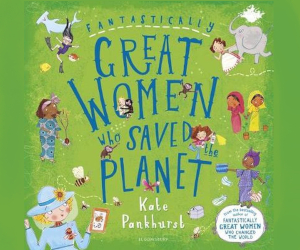