For a century and a half Alice's Adventures in Wonderland and the sequel Through the Looking Glass, Lewis Carroll's classic stories, have delighted young and old alike. With wonderfully imaginative characters; the White Rabbit, the grinning Cheshire Cat, the murderous Queen of Hearts - and scenes of glorious lunacy; the Mad Hatter's tea party, Alice falling down the rabbit hole and the Game of Croquet, Alice has become an icon of children's literature and has inspired numerous books, film and tv adaptations, ballets, theatre productions and musicals.   Why not throw your own Mad Hatter's Tea Party?  Download this party pack for some great ideas!

This beautiful board is the perfect first introduction to Alice. Babies and toddlers will love the playful and quirky characters Alison Jay brings to life with her own unique perspective whilst encapsulating the zany other-worldness of Carroll's novel.

Children will love this doll’s house version of Alice in Wonderland. The book opens out into a pretty carousel, turning six favourite episodes into tempting 3D scenes. It opens with everyone’s favourite Drink Me scene, and also features the Mad Hatter’s tea party, and the trial of the Knave of Hearts, and readers will be tempted to peep into each one. Tenniel’s illustrations are brought into bright focus, and this is both the perfect introduction to the classic, and a lovely little object in itself. ~ Andrea Reece

Shortlisted for the CLPE Children’s Poetry Award (CLiPPA) 2017 Lewis Carroll's Alice has been enchanting children for 150 years. Curious Alice, the bossy White Rabbit, the formidable Queen of Hearts and the Mad Hatter are among the best-loved, most iconic literary creations of all time.

One of the most imaginative and best-loved of all children’s books, Lewis Carroll’s Alice’s Adventures in Wonderland is as original today as it was when it was first published in 1865. The stories of the amazing things Alice finds after she falls down the rabbit hole and the incredible people she meets including the Mad Hatter and the March Hare have become touchstones for readers through the ages. Lewis Carroll’s follow-up to Alice’s Adventures through the Looking Glass includes the introduction of Tweedledum and Tweedledee those most memorable of characters who famously fought over a brand new rattle. It is here, too, that the poem Jabberwocky first appeared and the poem ‘The Walrus and the Carpenter’.

Little books are somehow irresistible and this one is particularly appealing, both dainty and handsome with its cloth cover, gold sprayed edges and creamy paper. A shortened version of the original story, it contains the episodes most likely to appeal to young readers – including of course Tweedledum and Tweedledee – and also features thirty of Tenniel’s illustrations, which are just as jewel-like in this small size. The perfect thing for a child to slip into a pocket or little bag it makes an ideal first introduction to Carroll’s classic. Alice's Adventures in Wonderland: The Little Folks edition is also available in the same charming format. ~ Andrea Reece

Julia Eccleshare's Pick of the Month July 2016  A perfect celebration of Alice Day 2016, this beautiful, fully illustrated edition of Lewis Carroll’s great comic masterpiece which comes complete with gilt-edged pages and a ribbon for a marker, is the perfect gift book for all ages. The Hunting of the Snark, the riotous story of a motley crew’s journey to find the elusive Snark, has a cast of amazing characters including some from Carroll’s The Jabberwocky all of which Chris Riddell brings to life in glorious, brightly coloured caricatures. ~ Julia Eccleshare A message from Chris Riddell : This book is nonsense and, like all the best nonsense, it makes a special kind of sense. The hunting of a Snark is a very complicated business and I suspect that not even the Bellman himself really knows quite how to go about it. But that doesn’t stop him and his crew from pursuing the strange, elusive creature with all the tools at their disposal. Thimbles, forks, railway-shares and soap are all used, along with a lot of care, hope, threats and smiles, but not even the lace-making Beaver, ‘bounding along on the tip of its tail’, can get close. Then, after seven poetic convulsions, in a final ‘fit’ of energy, one of the crew spots a Snark and . . . But no, beamish readers, I won’t give away the ending at the beginning, that would be nonsense. Just let me say, beware of the Jubjub bird that sounds like ‘a pencil that squeaks on a slate’, the frume of the frumious Bandersnatch that can turn you black in the face and, most of all, hunt the Snark carefully, for it might be a Boojum, you see. Julia Eccleshare's Picks of the Month for July 2016 Melric and the Crown by David McKee The Hunting of the Snark by Lewis Carroll, illustrated by Chris Riddell Up, Up and Away by Tom McLaughlin Strange Star by Emma Carroll Farmer Duck by Martin Waddell Such Stuff: A Story-Maker's Inspiration by Michael Morpurgo

Alice Through the Looking Glass

With a suitable companion to the celebratory 150th anniversary edition of Alice's Adventures in Wonderland, this title captures the humour and nonsense of the original story. It is suitable for younger readers.

The front of each card is printed in full colour, using the coloured versions of John Tenniel's iconic illustrations. The Macmillan Alice Postcard Book is a wonderful celebration of one of the best loved children's classics, from Lewis Carroll. A great gift to give or to keep for yourself!

Best-selling Cathy Cassidy weaves the classic story of The Adventures of Alice in Wonderland into this no holds-barred contemporary story of bullying and its impact. Alice accepts an invitation to Savvy’s sleepover because she hopes it might be a genuine offer of friendship. Two years into secondary school, Alice has been isolated and bullied by her former friends who are now part of Savvy’s gang. But Alice soon finds that things are about to get worse! Alice’s accident takes her into a wonderland of her own. How will she get out of it? ~ Julia Eccleshare One of our Books of the Year 2015   Download a letter from Cathy Cassidy to her readers about The Looking-Glass Girl.

A stunning gift edition of this children's classic, published to coincide with the 150th anniversary of Alice's Adventures in Wonderland. With exquisite artwork by Fran Parreño and a padded hardback cover this is a perfect gift to be read over and over.

Curious Alice, the bossy White Rabbit, the formidable Queen of Hearts and the Mad Hatter all feature in this exquisite collection of 100 postcards celebrating Lewis Carroll's Alice's Adventures in Wonderland. Each card has an appropriate quotation on the back, setting the image in context of the stories, or the history of this iconic publication.

One of our Books of the Year 2015 - Julia Eccleshare's Book of the Month, July 2015  The classic stories of Alice and her journeys into Wonderland and Through the Looking Glass are celebrating 150 years in print. These wonderfully imaginative stories have influenced children’s books ever since they were first published. In fact, it is often said that they were the origins of all the children’s literature that has followed as stories for children published before that were always moral tales. This handsome and long-lasting edition beautifully printed in a big type face which also includes Sir John Tenniel’s original illustrations in colour is a perfect way of introducing Alice and all the wonderful characters who feature in her adventures such as the White Rabbit, the Mad Hatter, the Red Queen and many more. In his eloquent introduction Philip Pullman expresses the view that the Alice stories have lasted so long ‘for the simple reason that they are full of delight’. These are stories that every child will enjoy getting to know because, as Philip Pullman says, “ They are as fresh and clever and funny today as they were a hundred and fifty years ago.” ~ Julia Eccleshare 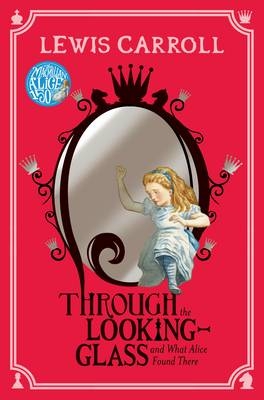 The story of Alice was first told by Charles Lutwidge Dodgson, a young don at Christ Church in Oxford in 1862, to entertain a group of children on a boat trip. One of these children was Alice Liddell, daughter of the Dean of Christ Church who, entranced by the tale, asked for it to be written down. Charles Dodgson duly did and gave it to Alice Liddell as a Christmas present, complete with his own illustrations.

It was originally entitled Alice's Adventures Under Ground and took him two and a half years to complete. Charles Dodgson had met the publisher, Alexander Macmillan some years previously. Macmillan loved Alice and published the story, with Dodgson choosing to write under the pseudonym, Lewis Carroll.

‘You would have to be half mad to dream me up.’ 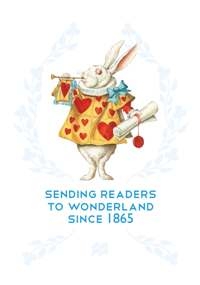 ‘Macmillan was instrumental in turning Alice into a literary and cultural phenomenon and it is through the artists we commissioned that Alice’s iconic look – her blue dress, blonde hair and “Alice band”– was established in the public mind. We are delighted to be able to put the heart back into the “The Macmillan Alice” for 2015 and beyond.’ Anthony Forbes Watson, Managing Director, Pan Macmillan

Lewis Carroll went on to write a sequel, Alice Through the Looking Glass, which contains the poems 'The Walrus and The Carpenter' and the nonsense poem 'Jabberwocky', which are now as famous as the Alice stories themselves.

‘If I had a world of my own, everything would be nonsense.’ 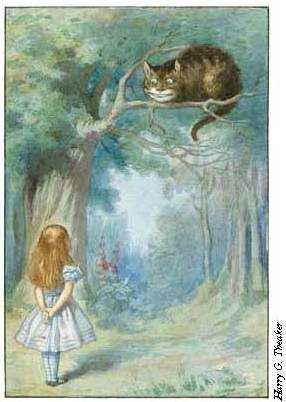 The story of Alice was originally brought to life by Sir John Tenniel, first as black-and-white plates and then with coloured versions of these original drawings.

When his eyesight began to fail, Tenniel gave approval to Macmillan in 1911 to ask Harry G. Theaker to complete sixteen new colour plates, and it is Theaker’s colourings that established the iconic image of Alice that we know today, with her bright blonde hair, her blue dress and her Alice band (which first appeared in the illustrations in Through the Looking-Glass and What Alice Found There).

Macmillan owns the copyright in many of these colour illustrations and it is a Tenniel/Theaker image that is presented on the new ‘Macmillan Alice 150 Years’ anniversary logo.

Chris Riddell, Children's Laureate : "Before I knew a thing about him, John Tenniel was a hero of mine, or rather, I should say, his white rabbit was. As a child I copied Tenniel’s illustrations from Alice’s Adventures in Wonderland obsessively, particularly his drawing of the White Rabbit in waistcoat and frock coat, umbrella tucked under one arm and a pocket watch in paw, a look of suppressed panic in his eye. I loved analysing the shading, intricate lines of cross-hatching, the folds of the sleeve, the tilt of the head, that wide-eyed rabbit stare. Tenniel was one of the reasons I became an illustrator."

The 150th Anniversary of Alice’s Adventures in Wonderland in 2015 saw the publication of numerous editions and abridged versions of Alice titles - you can find our favourite titles here in this special section.