The Winner of The Branford Boase Award 2018 has just been announced! Mitch Johnson, and editors Rebecca Hill and Becky Walker of Usborne,win this prestigious award for the outstanding novel, Kick. The judges described Kick as "a beautifully crafted story" and "It brilliantly captures the way the football-crazy child sees the world". The Branford Boase Award is awarded annually for an outstanding first novel to a first-time writer of a book for young people, from ages 7 upwards. At the same time, it marks the important contribution of the editor in identifying and nurturing new talent.

Shortlisted for the Branford Boase Award 2018  | In a Nutshell: Circus girl searches for roots amidst real-world cruelties  A dazzlingly powerful kaleidoscope of magic realism, folklore and the brutalities of people-trafficking in which a fourteen-year-old circus girl seeks to uncover her identity.  As a baby, Sante was washed up with a chest containing a bamboo flute and a leopard skin drum, and welcomed into Mama Rose’s travelling circus. Fourteen years later, still haunted by dreams of the sinking ship, and of those who furnished her with special objects to see her through life, Sante recognises two people from her dreams during a performance. “It's her all right. She plays just like Mamadou used to”, one of them remarks. But how do these people know her? Why does she dream of them? And who is Mamadou? Reluctant at first, Mama Rose reveals that Sante’s trunk also contained other treasures, including a note from her mother. With the strangers set on claiming Sante’s riches, she and snake charmer Cobra decide to discover the truth for themselves. Throughout, Sante’s story sings with the hauntingly potent voice of the human spirit as it combines timely, poignant truths about refugees with timeless storytelling. This really is a triumphant, thought-provoking treasure trove of a novel.  ~ Joanne Owen The Branford Boase Judges said :  ‘packed with memorable scenes and an extraordinarily vivid sense of place’; ‘language and story are equally interesting’; ‘things don’t come more original than this’.

April 2018 Debut of the Month |  Shortlisted for the Branford Boase Award 2018  | In a nutshell: breath-taking magical adventure on the banks of London’s underground rivers Hyacinth Hayward, newly arrived in the UK from the US, is already struggling with culture shock when her mum is kidnapped by the strangest postmen ever and she herself is plunged (literally) into extraordinary adventure. Amongst the mass of magical quest adventures, The City of Secret Rivers stands out and not just because of its cast of fascinating characters (unscrupulous sewer dwelling cockney criminals and a possibly malevolent but extremely polite giant pig included), or its singular setting (the banks of London’s underground rivers); the sheer invention and wit of author Jacob Sager Weinstein makes this a special read and every page crackles with originality and energy. Outlandish fun! ~ Andrea Reece Readers looking for more page-turning adventures that cleverly combine real historical places with rip-roaring adventure will enjoy the Defender of the Realm series by Nick Ostler and Mark Huckerby. The Branford Boase Judges said : ‘clever, so funny, so well controlled’; ‘hugely inventive’; ‘I thought “I know where this is going to end” – and I didn’t’; ‘a joyful caper that carries you along’.

Shortlisted for the Branford Boase Award 2018  |  Longlisted for the UKLA 2018 Book Award March 2017 Debut of the Month     In a sparely written but richly imaginative story, Chloe Daykin sensitively explores what it feels like to see the world just a bit differently. Billy loves the sea and uses swimming as a way of escaping the difficulties of his unwell mother. But his love of the sea also makes him the butt of his class mates’ jokes as it marks him out as different. Billy increasingly creates an alternative world for himself inspired in part by the lessons about animals that he has learnt from David Attenborough’s programmes. But when a new boy arrives in the class Billy finds someone who understands him. Fish Boy is a debut novel to savour. ~ Julia Eccleshare The Branford Boase Judges said :  'the friendship between two outsiders is very touching indeed’; ‘a unique internal voice beautifully described’; ‘interesting and surprising'.

He wasn't an alien, I was sure of that. It was more like he'd walked in through an ancient door from the past ... except he was here, in my bedroom and his misty forest was somewhere real on Planet Earth. Twelve-year-old Kofi first spots the prehistoric human on a supermarket roundabout. He is small and dark and curled into a tight ball. His name is Rorty Thrutch and he has zero memory of how he ended up in the unexceptional village of Bradborough, or why he's being hunted... Kofi soon finds out that Rorty can do amazing things. He can copy, paste and delete objects, using only the power of his mind. This is the discovery of the century and mad, greedy scientists will stop at nothing to track him down. Kofi and best friend Janie are on a mission. Not only must they protect Rorty, but they have to find his missing girlfriend Pogsy Blue, too. Our prehistoric ancestors have crashed headlong into the 21st century and time is running out to save them... The Starman and Me explores where we have come from and where we are moving to - it's about the magic of DNA, the power of identity, and the importance of caring for each other.

Shortlisted for the Branford Boase Award 2018 | In a nutshell: hilarious courtly adventure from one of our funniest, most inventive writer-illustrators | Elys Dolan fills her first adventure story for young readers with the madcap invention and humour that are the trademark of her picture books. Dave is a dragon, but not a typical one: he’d much rather bury his nose in a book than a treasure hoard and when he picks up a second-hand copy of How to be a Knight, he knows he’s found his calling. Ably assisted by his trusty steed Albrecht who, though a goat, has all the requisite attributes – attitude, looks, glossiness, not to mention the ability to speak, and a decidedly colourful past – he sets out to win his knighthood. There’s something funny on each page either in the text or illustrations and this will have every reader laughing. Underneath the humour is a lovely message about being true to yourself. ~ 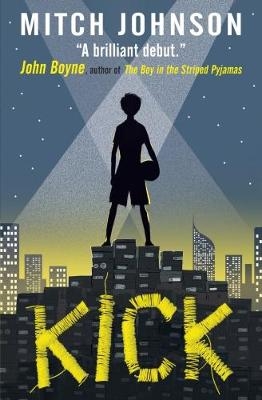 On winning the prize Mitch Johnson said; “For some readers, Kick may be a book of firsts: the first time they encounter a novel set in Indonesia; or mingle with a cast of characters whose daily wage is almost impossible to believe; or are offered a glimpse into the murky world of how things are made. But there will also be a lot that is recognizable, and by focusing on our inherent similarities, rather than the circumstantial differences that separate us, I hope we can start to dismantle the barriers that have been built between those who produce and those who consume. Now more than ever, I believe children need characters like Budi who are filled with goodness and dreams and the desire for a better world. Characters who are incorruptible despite the precedents – despite everything – and who will keep kicking no matter what.”

Sharon Cohen and her editor Sarah Lambert were Highly Commended by the judges for The Starman and Me.

Chair of the Judges, Julia Eccleshare said: “Kick is an adventure story that connects UK readers with a boy living a completely different and tough life halfway across the world; it is a book full of humour and heart. At a time when many children’s books seem to be looking inward, Mitch Johnson has written a book about a global issue, encouraging children to think about the way the world works, and even how they could effect change. But each of the seven books on our shortlist would be worthy winners of the award and are proof of the talent of children’s writers and editors in 2018.”

Winning editors Rebecca Hill and Becky Walker said: “Every year it's fantastic to discover the range of new talent on the Branford Boase shortlist, and we are hugely proud to see Mitch’s writing rewarded so early in his career. Working with Mitch we have discovered a true craftsman: someone who makes every single sentence matter and creates characters that you take into your heart and soul. We know this is the start of a long and glittering career for Mitch, and are thrilled to have played a part in bringing this book to readers everywhere.” 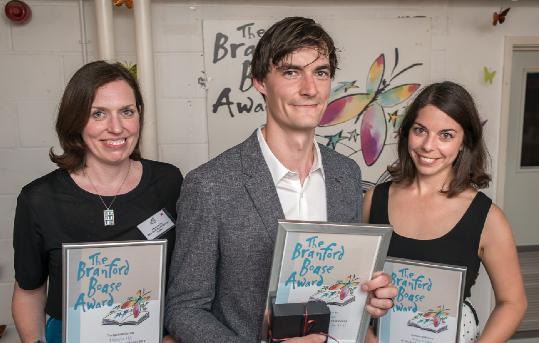 Now in its 19th year the Branford Boase Award is recognised as one of the most important awards in children’s books with an impressive record in identifying authors with special talent at the start of their careers.

Uniquely, it also honours the editor of the winning title and highlights the importance of the editor in nurturing new talent.

The Branford Boase Award was set up in memory of the outstanding and prize-winning author Henrietta Branford and Wendy Boase, editorial director and one of the founders of Walker Books. They worked together on a number of Henrietta’s novels, a partnership they greatly enjoyed.

Henrietta Branford was a gifted novelist for young people. During her short career she won the Smarties Prize in 1994 for Dimanche Diller (Harper Collins) and the Guardian Fiction Prize in 1998 for Fire, Bed and Bone (Walker Books); she was twice shortlisted for the Guardian Fiction Prize, in 1994 and 1997. Her progress and development as a writer was watched with interest by publishers, critics and fellow writers alike.

Wendy Boase, Editorial Director of Walker Books, and one of its founders, was a passionate children's book editor wholly committed to developing new writers and nursing them through their early writing careers. She is credited with bringing on many new talents. She and Henrietta worked together on a number of her books, a partnership that was warmly appreciated by Henrietta.

Both Henrietta and Wendy died of cancer in early 1999. The Branford Boase Award wishes to celebrate and encourage, in their names and in their memories, the crucial early development of new writing talent.

The shortlist for the Branford Boase was published on the 2 May and the winner was announced in July 2018 at a ceremony in London, winning a cheque for £1,000 and both author and editor received a unique, hand-crafted silver-inlaid box.

For more information on the Branford Boase Award visit www.branfordboaseaward.org.uk.