The Jungle Book, Rudyard Kipling's classic collection of fables, is coming to the big screen in a highly-anticipated, live-action movie with an A-list cast including Scarlet Johannsson, Bill Murray, Idris Elba and Ben Kingsley. To join in the Jungle Book fever we've gathered together a great collection of books for toddlers through to adults!

A Julia Eccleshare Pick of the Month October 2016  A complex and tightly woven spy story lies at the heart of Rudyard Kipling’s classic adventure story set in India at the end of the eighteenth century. Kim, or Kimball O’Hara to know him by his full name, an English orphan living on the city streets, ekes out a living by being a useful messenger for all and a cunning spy. Picked out by a Tibetan Lama, Kim sets out on a great journey to find Enlightenment and finds himself caught up in the Great Game, the struggle between Britain and Russia to control Asia. Kim has to come to terms with where he belongs and make hard choices of loyalty. Rudyard Kipling’s creative language, so much loved in The Just-So Stories and The Jungle Book, makes Kim’s experiences in the India of the time vivid. Perfect for reading aloud.  ~ Julia Eccleshare Julia Eccleshare's Picks of the Month for October 2016 Kim by Rudyard Kipling The Fox and the Ghost King by Michael Morpurgo Coming to England by Floella Benjamin Owl Bat Bat Owl by Marie Louise Fitzpatrick We Found a Hat by Jon Klassen The Christmasaurus by Tom Fletcher The War Next Door by Phil Earle

Playing in the gardens of their home, Dan and Una come across Puck, an ancient fairy with a gift for storytelling. Puck of Pook's Hill was first published by Macmillan in 1906 and features the original illustrations by H. R. Millar.

This second collection of stories and poetry featuring Dan and Una and their adventures with the fairy, Puck, is a classic to treasure. Rewards and Fairies was originally published by Macmillan in 1910. The collection includes If, the nation's favourite poem and features original illustrations by Charles E. Brock.

Oh my, what an absolute treasure this is.  Rudyard Kipling’s The Jungle Book was first published in 1894 and now, over 120 years later, it’s still capturing imaginations.  This collectable, clothbound edition is not only complete and unabridged but has the addition of stunning interactive illustrations by London design studio MinaLima.  The attention to detail is breath-taking and as you wander through Kipling’s wonderful prose and verse, you’ll discover page after page of treasures including detailed maps, pull out figures and a spinning dial of the elephant dance.  This is a truly wonderful edition that will be a delight for friends of the stories old and new.  It is a book to read, to explore and to simply hold and admire the beautiful illustrations inspired by this timeless story that continues to bring generations together.

Share the joy of The Jungle Book with your young book lovers in this gentle retelling of Rudyard Kipling’s classic story of man-cub Mowgli and his friends Baloo and Bagheera. Explore the bright, colourful illustrations that accompany Mowgli’s adventures as he learns the ways of the Jungle and discovers where he truly belongs. This beautiful picture book will give your own cubs plenty to talk about and is the perfect introduction to Kipling’s original story that will continue to be shared throughout the generations.

These witty, inventive stories have delighted generations of children.  Rudyard Kipling’s classic stories are beautifully presented in this highly attractive edition that tells the story of how different animals have come by their characteristic - How the Leopard Got his Spots, How the Whale Got His Throat, The Cat that Walked By Itself and the others remains one of the best books to read aloud to any one from 5 upwards.

Mowgli, the little boy brought up in the jungle with the wolves, is one of the best-loved characters of fiction. His friends - and enemies – among the jungle animals include Baloo the sloth bear, Bagheera the panther, and Rikki-Tikki-Tavi, the mongoose are all wonderful characters too and Rudyard Kipling’s imagining of the jungle provides a thoughtful insight into that very special habitat. ~ Julia Eccleshare

This beautifully produced colouring book contains all your favourite characters from Kipling's classic story - Mowgli, Baloo the Bear, Bagheera the Panther, Kaa the Snake, not forgetting the terrifying tiger, Shere Khan. Many of the drawings in this book were inspired by the original illustrations by Kipling's father, J. Lockwood Kipling, who illustrated the first edition of The Jungle Book, published by Macmillan in 1894.

Push, pull and slide mechanisms to bring the story of The Jungle Book to life and see favourite scenes in action. Mowgli, Baloo, Bagheera and of course the fearsome tiger Shere Khan are all beautifully imagined by Miriam Bos in her bold, appealing illustrations.

With a new version of Kipling’s classic due to hit the big screen, Robert Hunter’s picture book offers a different introduction to the story of Mowgli and Bagheera. He updates it to the present day, and the skyscrapers of modern Mumbai provide a startling contrast to the jungle scenes. The text is on the prosaic side but the pictures carry the story. Using bright digital illustrations and a palette of fiery reds and oranges and deep atmospheric purples, Hunter conveys drama and excitement particularly in Mowgli’s final combat with Shere Khan. The story of the boy torn between the human and the animal world is as relevant today as ever, and will continue to intrigue young readers. ~ Andrea Reece

Mowgli, the little boy brought up in the jungle with the wolves, is one of the best-loved characters of fiction. His friends - and enemies – among the jungle animals include Baloo the sloth bear, Bagheera the panther, and Rikki-Tikki-Tavi, the mongoose are all wonderful characters too and Rudyard Kipling’s imagining of the jungle provides a thoughtful insight into that very special habitat. In his foreword, Ben Fogle captures his enthusiasm for the book as a child and also how it has influenced his later life. One of a range of Macmillan Classics, beautifully produced hardback editions of some of the best-loved stories from the past. Each has a introduction by another author who, in their turn, have been influenced by the great writers of these books. 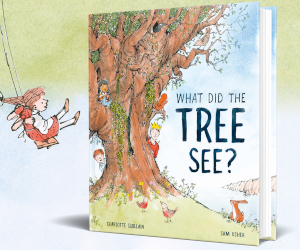 First published by Macmillan in 1894, The Jungle Book by Rudyard Kipling is a much loved classic collection of short stories and poems of life in the Indian jungle.

The best known of the stories are the tales of Mowgli, the abandoned man-cub who is raised by wolves, makes an enemy of the tiger Shere Khan and is protected by Baloo the bear and Bagheera the black panther.

There are some fantastic new books released to coincide with the interest the two Jungle Book blockbuster movies are generating. Accompanying Rudyard Kipling's masterful writing is some beautiful artwork -

These two gorgeous graphics are from The Jungle Book, published by HarperCollins and illustrated by MinaLima, a hugely talented and imaginative design team. 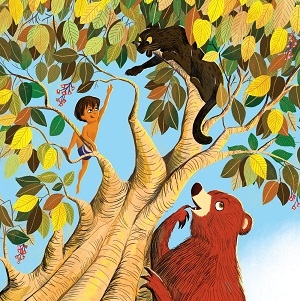 Migy Blanco's bold and colourful art brings Mowgli and his friends to life in this retelling of The Jungle Book by Laura Driscoll. 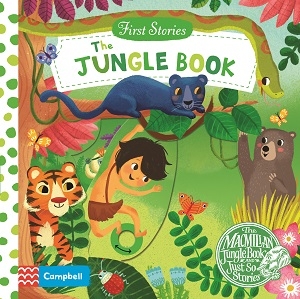 The Jungle Book board book from Campbell Books is a great first introduction to the characters with Miriam Bos's lively illustrations.

Or use your own artistic skills in The Macmillan Jungle Book Colouring Book, full of drawings and decorative pieces many inspired by the original illustrations of John Lockwood Kipling, Rudyard Kipling's father, who illustrated the very first edition of The Jungle Book. 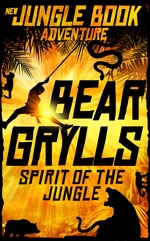 Also coming in October 2016, from the internationally renowned survival expert Bear Grylls a new Jungle Book adventure called Spirit of the Jungle. The novel for 10+ readers takes a new and exciting contemporary look at The Jungle Book with a central story woven through with real-life survival tips from the master of the outdoors.

Rudyard Kipling (1865-1936) was born in Bombay (now Mumbai) India and lived there until he was sent to be educated in England aged 5. He left school at 16 and returned to India, working as a journalist and gaining material and experiences which would provide him with ideas for his future novels. He was the first Englishman to receive the Nobel Prize for Literature in 1907. Kipling's best known works include The Jungle Book, Just So Stories and Kim and poems 'If' and 'Mandalay'.
Rudyard Kipling is buried in Poets' Corner in Westminster Abbey.

You can find out more about Rudyard Kipling at www.kiplingsociety.co.uk

Many of us had our first taste of the Jungle Book in the brilliant 1967 Disney animation, with the unforgettable songs The Bare Necessities of Life and I Wanna Be Like You -  www.disney.co.uk/the jungle book.

Jon Favreau's new film is based upon this Disney animation favourite but he has also woven more of the Rudyard Kipling originals into the story.

You can keep up with all the latest film news @TheJungleBook  and on facebook at The Jungle Book.