A  bear on Paddington Station? said Mrs Brown in amazement. Don't be silly, there can't be.  And so begins the story of one of our best-loved characters, a lost bear from Darkest Peru found by the Brown family at Paddington station. His adventures had just begun. You can find out more about Paddington in this special section; with a selection of re-issued stories plus film tie-in books for the new Paddington 2 movie. Click on any of the titles below to enter a competition to win some wonderful Paddington goody bags.

Fans of Paddington and his new film will have great fun with this quality activity book.  As well as 150 different stickers with which to decorate a variety of scenes, there are cut-out postcards, door hangers and a mask, plus a board game, wordsearches, puzzles and much, much more.  The illustrations are taken from the film and look very good indeed. Paddington himself graces most spreads, looking as cute and cuddly as he ever has and look out for special appearances by Aunt Lucy too.  Lots of fun and Paddington’s world is particularly appealing. Andrea Reece

Paddington’s new big-screen adventure offers lots of excitement, action and, of course, laughs. Children (and adults too) will love it, and this full-colour storybook is both a lovely souvenir and a way for them to enjoy it all again and again.  The story is told through a combination of short paragraphs of text and lines of dialogue plus lots of stills from the movie.  It’s bright, attractive and fun to read, Paddington is his warm-hearted, cuddly little self throughout. Andrea Reece

Paddington 2: The Story of the Movie Movie Tie-in

Paddington’s new adventures on the big screen have reminded everyone of just why the little bear from Darkest Peru is such a favourite in his adopted homeland. Paddington is generous, warm-hearted, an innocent who brings out the best in those around him (even hardened criminals in this new story), but inadvertently causes chaos on a regular basis.  That’s certainly the case in this new story and film. The plot hinges on a beautiful pop-up book of London: Paddington wants it for Great Aunt Lucy, but someone a lot less nice is after it too.  Anna Wilson’s lively story version captures all the fun and excitement of the film, and all that we love about Paddington too. Andrea Reece

Paddington’s adventures in his new film stem from a book, a beautiful pop-up book of London in times gone by.  Now here is a beautiful pop-up book of London for fans of Paddington and the film to treasure.  Readers can explore olden days London with Paddington and his Great Aunt Lucy, as six stylishly illustrated scenes pop up before their eyes, from Piccadilly Circus to St Paul’s Cathedral and the Houses of Parliament.  They’ll be able to spot Paddington and his aunt in the scenes, riding on buses (one-and-a-half-bears please, asks Paddington politely) and amongst the crowds, and the spectacular paper-engineering will make them feel they are really part of it too.  A gorgeous book which will provide readers with many, many hours of pleasure. Andrea Reece

A pocketful of Paddington will make any day or journey better. This dinky little slipcase contains four sturdy board books, each with a short but satisfying narrative. Using stills from the hugely popular film, the books describe Paddington's manners, introduce the Brown family and show him exploring his favourite bits of London. They are small, lots of fun and full of marmalade, just like Paddington himself in fact. ~ Andrea Reece

There’s hours of fun for young Paddington fans to be had in this sturdy sticker book, based on the new film. Paddington and his world look very appealing in the new screen versions of his stories and are reproduced with care here.  Scenes to decorate with photographic stickers include Paddington Station, Paddington’s favourite café, 32 Windsor Gardens, a London tube train, the Natural History Museum and of course Mr Gruber’s antique shop.  The stickers are jolly and very varied, and this is further proof that there isn’t a setting anywhere that can’t be improved by the addition of a marmalade sandwich. Andrea Reece

Aimed at younger readers, this is a picture book of the Paddington movie with stills from the film illustrating the story.  Paddington arrived in London from Deepest Peru and was fortunate enough to meet the very hospitable Brown family who took in this lost, and rather eccentric bear, into their family.

Paddington Movie - Paddington: the Story of the Movie

The film of Paddington ™ brings new stories about the favourite bear from Peru. In this book version Jeanne Willis brilliantly captures the exciting new adventures that Paddington is drawn into. On arrival in London Paddington is found and taken home by the Brown family. But, at the same time, he is noticed by Millicent who has a much more sinister motive for taking an interest in the small, lonely bear. Millicent is a taxidermist at the Natural History Museum and she is sure Paddington would make a great addition to her stuffed animal collection. Can Paddington avoid such a bleak future? ~ Julia Eccleshare

Stickers aplenty will provide lots of activity for all those who have loved seeing Paddington™. There are lots of marmalade sandwiches and a blue duffle coat to match onto the pictures in the book as well as all kinds of games to play – including a Race Across London to keep Paddington safe from Millicent, the evil taxidermist.

This special edition brings together three favourite classic adventures - Paddington in the Garden, Paddington at the Carnival and Paddington and the Grand Tour. Whether he is gardening, walking along the canal, or seeing the sights of London - as always - there is never a dull moment when Paddington is around!

Featuring characters from the film, activities, facts and more, and packed with images from the movie this is the ultimate annual for all Paddington fans.

One of our Books of the Year 2014  The classic story of Paddington Bear, so called because the Brown family first meet him on Paddington Station and decide to take him home. Paddington Bear has travelled all the way from Darkest Peru with a label round his neck that reads: “Please Look After This Bear”. Paddington Bear is a most delightful companion but he is not exactly house-trained and having him living with them brings the Browns all sorts of adventures. Stephen Fry reads the accompanying CD brilliantly.

Bears like Paddington are very rare, says Mrs Bird, and a good thing too, or it would cost us a small fortune in marmalade.

The very first Paddington book, A Bear Called Paddington, was published in October 1958. Since then there have been numerous books, plays, an animated children's series and 2 movies. Paddington the Movie and the new Paddington 2, feature a stellar cast including Nicole Kidman, Julie Walters, Peter Capaldi, Hugh Grant and Ben Whishaw as the voice of Paddington.

The idea of Paddington as a character came to Michael Bond after he bought his wife a small bear, the last bear alone on a shelf at Selfridges store, Oxford Street. He named it Paddington after the station close to his home. 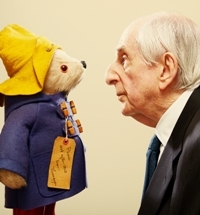 Michael Bond was working as a television cameraman at the BBC when he began writing his books about Paddington. His stories became so popular that he was able to give up his job with the BBC to become a full-time writer.

Of Paddington himself Michael Bond says: "The great advantage of having a bear as a central character is that he can combine the innocence of a child with the sophistication of an adult. Paddington is not the sort of bear that would ever go to the moon - he has his paws too firmly on the ground for that. He gets involved in everyday situations. He has a strong sense of right and wrong and doesn't take kindly to the red tape bureaucracy of the sillier rules and regulations with which we humans surround ourselves. As a bear he gets away with things. Paddington is humanised, but he couldn't possibly be 'human'. It just wouldn't work."

The Paddington books have sold more than thirty-five million copies worldwide and have been translated into over forty languages.

Paddington has even been on a special set of Royal Mail stamps!

In 1997 Michael Bond was awarded an OBE for services to children's literature. He is still writing and lives in London, not far from Paddington Station where it all began.