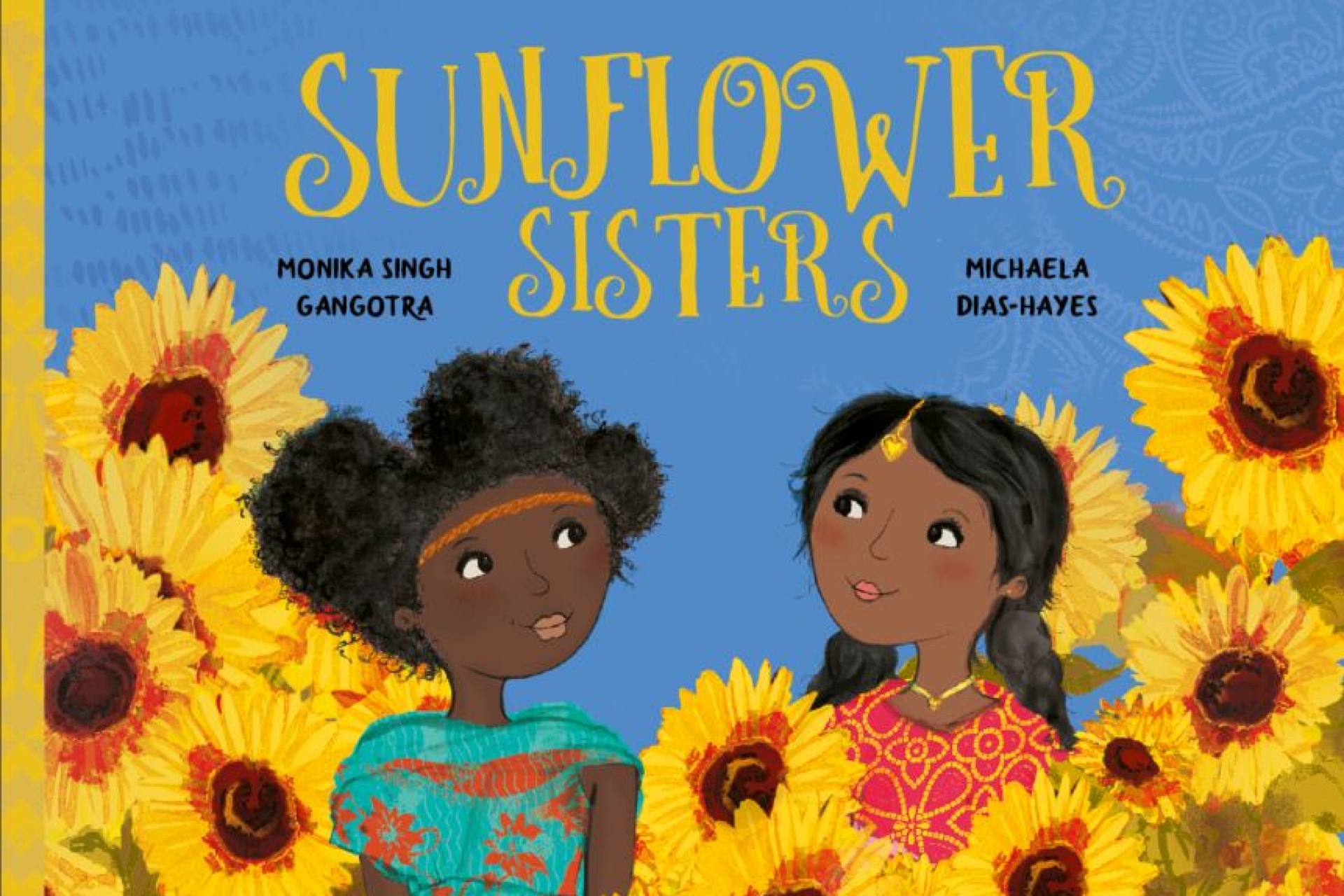 Sunflower Sisters by Monika Singh Gangotra is a powerful picture book exploring family pressures in relation to colourism. Monika shares with us her lived experiences, from her early years in a traditional community, her family and encounters with colourism from a young age and how becoming a mother inspired her to tackle the issue of colourism and unite black and brown communities across the world. 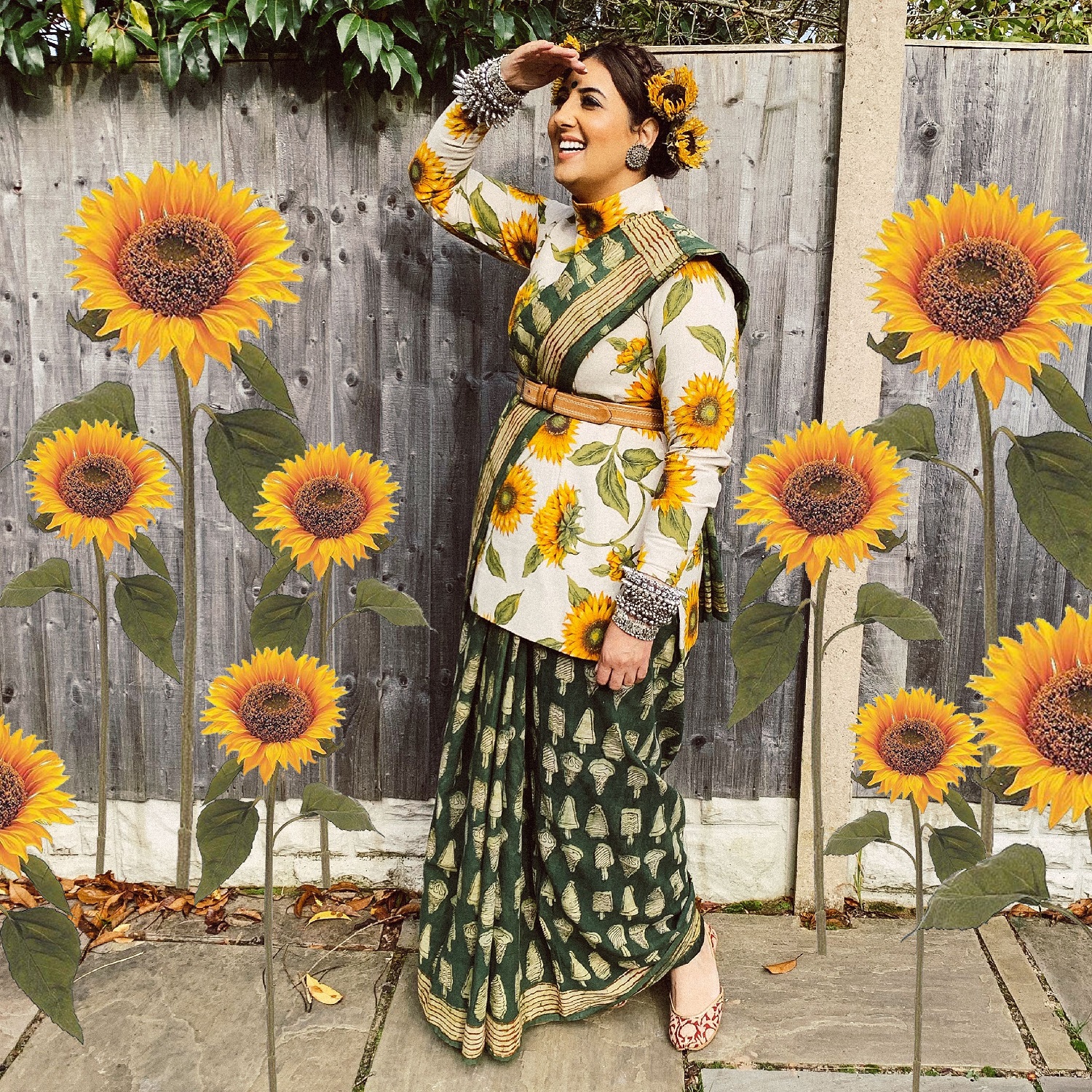 "I grew up on a small coastal town in Australia surrounded by a tight and very traditional Punjabi Sikh community. I graduated with honours in Psychology, exploring my religious, cultural and national identity as the basis for my thesis. I then went on to complete a masters degree with a publication in health psychology and completed a PhD, graduating in 2005 after giving birth to my first daughter.

I grew up in a household that was always brimming with family coming to visit and both my maternal and paternal grandmothers lived with us periodically. Living my childhood mostly as a 90s kid in this small town allowed for little/no south Asian representation. We learned about our language, religion and culture through our family or community gatherings and VHS Bollywood films sold from the back of a van. There were no south Asian people on any of the media platforms we had access to at the time (television or radio) and none that we saw in the creative arts such as Hollywood blockbuster films or music videos or even our school teachers.

The issue of colourism was always present in my childhood, especially from my mother. We had quite an outdoorsy lifestyle – swimming at the beach and playing outside - which was always encouraged by my father as he wanted us to be active and have great adventures. It was a real contrast from his childhood and he wanted us to embrace as much of it as possible. However, my mum was always concerned about our skin going dark and discouraged most of these activities unless it was mandatory for school. And then we would be slathered with sunscreen and protective wear. Getting dressed for cultural functions and picking colours was always about how dark our skin reflected and all the south Asian movies and music videos we watched had heroines that were incredibly fair. The darker skinned girls would mostly be the friend, or a house maid – rarely the main character who the love story was based around. In bollywood songs the darker skinned girls were always the back up dancers who wore horrific outfits so as to not outshine the main fair character in her amazing clothes and jewellery.

We were frequently told not to drink to much tea at the fear of our skin darkening and were encouraged to bleach our faces to hide our facial hair, in turn making a skin look lighter too. And if we had gotten a tan from being in the sun, we were to scrub ourselves in the shower to “remove the maal” – i.e. dirt from our skin. Although my mother created this undertone of colourism within our household with both her daughters and her son, she would hate if anyone would comment on our skin colour. And rather than feeling empowered to be able to stand up to them (family in particular) she would try her best not to give them the opportunity by using the abovementioned methods of keeping us fair. There was a clear belief that those that were fair were more beautiful. I always felt disheartened that my looks were the most important thing in determining my success – in life and in finding a partner. I was by no means the prettiest of the 3 children in our house and it was difficult to feel that way at such a young age. No one ever openly talked about my looks or tried purposely to make me feel less pretty. 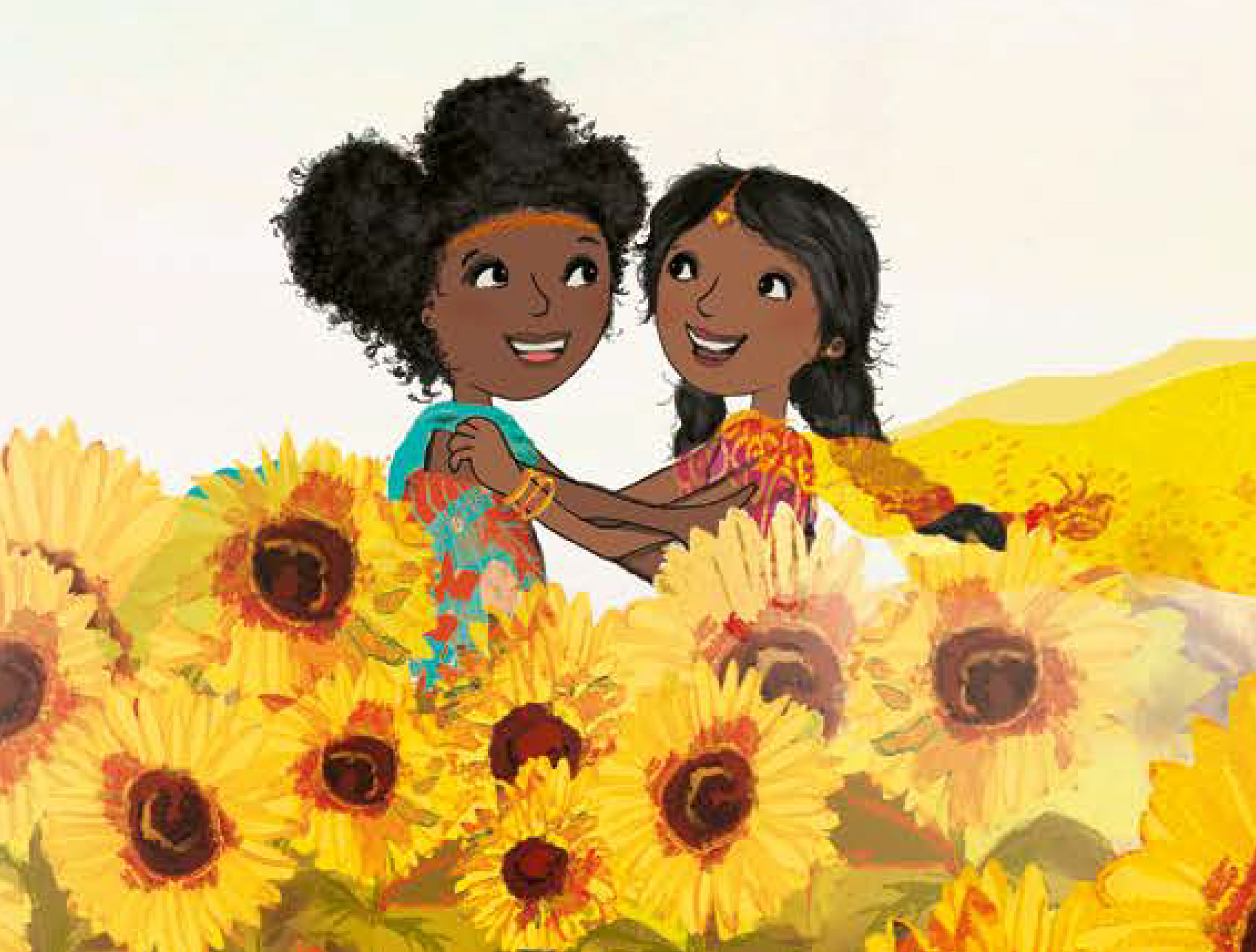 My parents always allowed me to express myself in what I wore, but my sister was like a goddess. A spitting image of my actress mother. And my brother? Well, he was a boy so he had it in the bag (so I thought – he was prescribed Roaccutane in his teens and my mum would comment about how clear and fair it made his skin and how she should perhaps try it on herself). All these undertones throughout my childhood really caused me to reflect on how I saw myself in the mirror and how much of a bearing what other people thought and what I saw in the media shaped those views. It was a confusing time – my father encouraged my travel, my identity, my expression and educational goals and my mum, although she was proud of me, mostly wanted me to find a good husband. And she felt the way to do that was to be the most beautiful I could, including being fair.

But she wasn’t entirely to blame. Although I wish she didn’t focus so much on my looks (and rather on my hilarious and witty personality) I also understand how much of an influence other women within the community played a part – gossiping, comparing. She wanted me to succeed and this was the way she felt it was possible.

Fast forward many years ahead and out pops my daughter. Everything changed and I began to educate myself on colourism and the importance of multicultural friendships and influences, which I didn’t have growing up. I either had white or south Asian friends. That’s it. Living and raising a family in the UK allowed for so much more exposure to all different kinds of people – something I had always longed for. And what was better it was on all sorts of platforms. I also felt strongly that I wanted to empower myself to stand up to those who still carried these colourism beliefs to be able to support my daughter. I always felt that standing up for myself or someone that I loved had to result in negative consequences (especially to those older than me – I was taught it showed a lack of respect) but I educated myself on how to handle these situations and I felt like I could breathe. I felt powerful and brave.

And this book was born. I wanted my daughter to have a book that was focused on the importance of strong community relationships and friendships – neighbourhood relationships with people from all different identities, cultures, religions and backgrounds. I also wanted mothers of my generation to be able to read this book and feel empowered to make change. Society will always have those that hold outdated beliefs that don’t align with ours, but having books such as this allows mothers to feel empowered and in turn to help change a generation, seeking beauty beyond the physical but rather in joy and love.

Mothers in the south Asian community can be incredibly powerful in shaping community and generational views and I feel it’s time to use that power for a much-needed positive change – through education and conversation – and a wonderful children’s books of course! In all honesty, I didn’t know colourism was a construct until just a few years ago. I just knew that I hated the thought of a person being judged on something they couldn’t control. Being fair was the lucky hand you were dealt with and if you weren’t, there were different things you had do to ensure you were fair – including wearing foundation in shades much lighter than your own skin.

I wanted this book not to sugar coat the things that we were exposed to as I feel it is important for people to recognise phrases and actions that are in fact harmful and colourism-related, not just cultural or beauty related or someone looking out for your best interest. We should be able to more than co-exist with people of all shades of colour, to wear what we want and know that it does not in any way reflect our success and has no bearing on our own self love, self worth and the love we receive from others."

The story is beautifully illustrated by Michaela Dias-Hayes who drew on her own heritage and family to bring her characters authenticity.  Sunflower Sisters is the first in a new and uplifting book series from Owlet Press. Publisher, Sam Langley-Swain, said “The partnership between two creators with lived experiences and our investment in seeking advice from the right voices in and around our industry has helped us tackle this important issue in a sensitive and authentic way. The result is one of the first picture books to address colourism in a direct and uplifting way.”

Read our review of Sunflower Sisters and download an extract from the book, plus we have a video of Monika introducing the story. 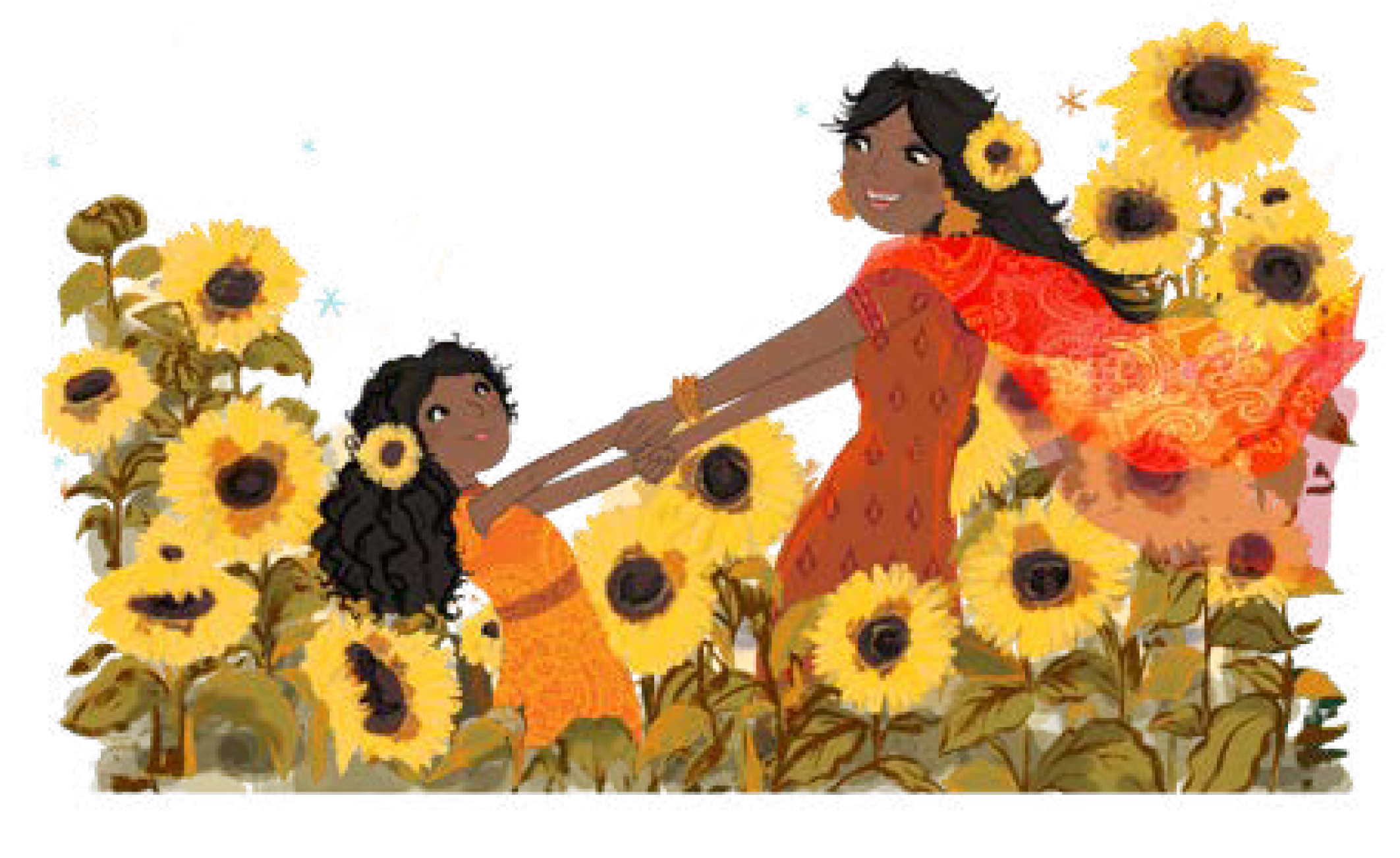