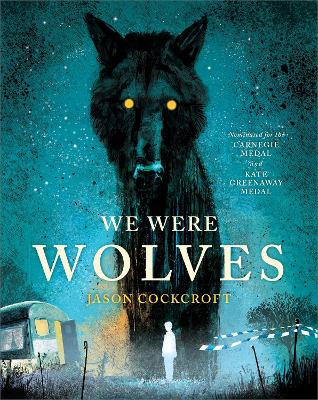 "Gritty and otherworldly exploration of father-son bonds, survival, PTSD and the power of nature"

Raw, haunting and elemental, Jason Cockcroft’s We Were Wolves is a beautifully-written, atmospherically illustrated tour de force. Multi-layered, rich in symbolism, and suffused in the wild majesty of the natural world, it explores love, loss, father-son bonds and PTSD with devastating power.

Boy lives in the woods in John’s caravan. “John was my dad’s name,” Boy explains. “He never liked me calling him Dad and didn’t call me son, not even when I was young and he was away in the desert making sure we were all safe.” During duty as a solider, John witnessed “men turned to red dust in a gunflash, and flames that spewed up from the black sand, straight like fountains”. On returning, he retreated to the caravan and ended up in prison, leaving Boy alone in the woods.

Sagely, Boy realises that “what happened was set out before I was born even, and before John and my mam met, and before the war, too. Before the beasts that had laid quiet under that wood for thousands of years finally climbed up out of the soil. It was all set like a sleeping stone in the earth beneath our feet long before any of us were here, like the bones of bears and wolves and wild bulls that are there if you dig deep enough.” This is typical of Boy‘s voice - it cuts to the soul with brutal power, at once wise beyond his years and sorely young. Now alone, Boy has been instructed to keep himself hidden - especially from the Bad Man - as he awaits his father’s promised imminent return. He’s even lied to Mam about John’s imprisonment. But trouble encroaches Boy’s place in the woods like expectant vultures.

Utterly unique (though reminiscent of David Almond in its brilliant bone-deep evocation of primary emotional states and of-the-moment situations, and its transcendence of age boundaries), We Were Wolves is a tense and timely triumph.

We Were Wolves Synopsis

Medal Boy lives in a caravan on his own in the woods. His dad, John, is in prison and promises to get out soon. All the boy needs to do is survive alone for a little while longer. But dark forces are circling - like the dangerous man in the Range Rover, who is looking for his stolen money. And then there are the ancient forces that have lain asleep in the woods for an age.

'A truly original and affecting piece of work. Unsettling but beautiful, sparse but packed with heart, it's a real invasion of the senses A beautifully strange illustrated novel... the shadowy illustrations remind us of beasts lurking under the soil, and the fine line between myth and reality. This powerful, unsentimental novel calls to mind the work of Patrick Ness and David Almond, and their capacity to be both topical and timeless' - Irish Times

'This beautiful, tensely written book is a classic of its kind, squeezing every drop of tension out of the reader until the final, hallucinatory climax ... beautifully written, taut and tense -- Melvin Burgess Just like Harry Potter, this story cuts straight through to the human experiences, and the myths and fantasy only increase its emotional resonance' - Mugglenet

'Yearning regret punctuated by glimpses of real companionship and pure dread. What a joy to see Jason's pictures matched by such an unsentimental but tender story' - Geraldine McCaughrean -

Jason Cockcroft was born in New Zealand, and raised in Leeds, West Yorkshire. He graduated from Falmouth School of Art in 1994 and has been working as an illustrator of children/s books ever since. Jason has been nominated for the Kate Greenaway award and he won the inaugural Blue Peter Book Award in 2000 for his work on Geraldine McCaughrean’s A Pilgrim's Progress  and was the illustrator on the original covers of the final three Harry Potter novels. He is also an accomplished watercolour artist and portrait painter. When he's not drawing and painting, he's usually drinking tea and staring out of the window at nothing in particular. He's very happy to live in a beautiful city that sounds like church bells, smells like chocolate and is invaded by Vikings all year round.

Longlisted for the Carnegie Medal | Nominated for the Kate Greenaway Award