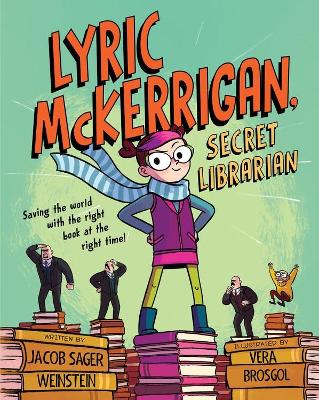 When an evil genius has a diabolical plan to destroy every book on the planet, who has the tome-toting page power to thwart his dastardly scheme? Lyric McKerrigan, Secret Librarian! She's got the gadgets. She's got the disguises. And she's always got the right book at the right time. It's a good thing, too, because Lyric McKerrigan is the world's last hope! Jacob Sager Weinstein and Vera Brosgol introduce a smart and crafty heroine who is part comic-book hero, part reader extraordinaire, and wholly awesome.

Jacob Sager Weinstein's picture books include Lyric McKerrigan, Secret Librarian, illustrated by Vera Brosgol. His work for adults has appeared in The New Yorker, McSweeney's, andThe Onion. He lives in London. jacobsagerweinstein.com Twitter: @jacobsw Vera Brosgol was born in Moscow, Russia and moved to the United States when she was five. Her first graphic novel, Anya's Ghost, won Eisner, Cyblis, and Harvey awards. Her picture book Leave Me Alone! received a Caldecott Honor. She was a storyboard artist at Laika for ten years, working on films including Coraline and Kubo and the Two Strings. She lives in Portland, Oregon. Visit her online at verabee.com and on Twitter and Instagram @verabee.

More About Jacob Sager Weinstein
Add To Wishlist
Buy from our bookstore and 25% of the cover price will be given to a school of your choice to buy more books.