The appeal of this Canadian classic children's book is seemingly everlasting - for it is a story of an individual making good by her own efforts, an orphaned girl sent to live with an elderly brother and sister who really want a boy to help on the farm. First published in 1908, the book was written by a scoolteacher who'd experienced the same upbringing as her heroine and who set her story in the place she knew best - Prince Edward Island. The story was popular from the start, and Mark Twain described Anne as 'the dearest, and most lovable child in fiction since the ommortal Alice'. The book has been filmed, staged, tramslated in many languages, and has been introduced by a highly successful TV dramatization. Sybil Tawse, English portrait painter and illustrator of many classics, including Mrs Gaskell's CRANFORD and Lamb's ESSAYS OF ELIA, provided the pen-and-ink drawings in 1933.

L. M. Montgomery, known as Maud, was born on Prince Edward Island, off the coast of Canada, in 1874. Maud's mother died when she was just a baby and so she had a rather unhappy childhood growing up in the care of her strict grandparents. She was just sixteen when she had her first poem published. As a young woman she worked as a teacher and although she didn't enjoy it much it gave her lots of time to write. Maud wrote hundred of short stories, poems and novels throughout her life but it was the hugely popular Anne of Green ... 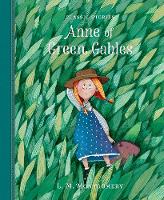