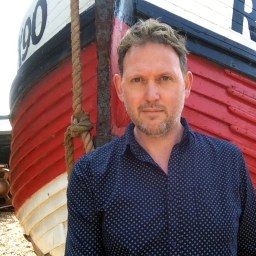 Thomas Taylor was born in Norwich, but grew up by the sea in Wales. His childhood was mostly about drawing, something he learnt to do in Maths classes.

After art school, Thomas set out to illustrate books, then to write them himself. His first commission was the cover art for Harry Potter and the Philosopher’s Stone by J.K. Rowling. Following this, he pursued a career in picture books, mostly from France where he lived for many years.

Thomas now lives on the south coast of England and has two sons. Sometimes they ask for help with their maths homework, so now they’re learning to draw too.

His debut novels published simultaneously in June 2012 were Haunters and Dan and the Dead.

September 2021 Book of the Month | On the eve of Ghastly Night, a hypnotic stage magician, Caliastra, checks in to Eerie-on-Sea’s Grand Nautilus Hotel. She’s arrived with her entourage to put on a show – and she claims to be related to Herbert Lemon. Caliastra’s act is so shadowy and strange that Herbie’s friend Violet wonders if dark forces are at work, but Herbie won’t hear a word said against his new relation.

There's a storm raging in Eerie-on-Sea. Has the mighty Gargantis come back from the deep...?  When an ancient bottle is found washed up on the beach after a ferocious electrical storm, all the residents of Eerie-on-Sea seem to want it ... but should they in fact fear it? Legend has it that the bottle contains an extraordinary secret that spells doom for the whole of Eerie-on-Sea. Could it be true that the vast sea creature Gargantis has awoken from her slumbers, and is causing the large cracks that are appearing all across the town? Finding themselves entrusted with the bottle, Herbie and Violet discover they will need to ride the terrible storm and pacify the creature if they want to save Eerie-on-Sea from sliding into the ocean and being lost for ever.

Young Herbert Lemon has an honest heart and that matters a lot in Thomas Taylor’s story of magic and mystery. Herbert lives in the Grand Nautilus Hotel in the seaside town of Eerie. The hotel is right on the sea front and the mist that rolls in could be hiding all sorts of things, even the scaly Malamander, subject of so many town legends. Helping his new friend Violet find clues to the whereabouts of her missing parents – Herbert is a lost and found expert – results in the two children coming closer to the Malamander than they could ever have expected. Eerie is a wonderfully edgy place, strange, gothic and inhabited by some singular people, and Herbert and Violet’s adventures are equally unique and totally enthralling.

Dan and the Dead

Dan talks to the undead dead - and helps solve their problems. But when he takes on the case of a teenage shoplifter, things spin out of control. You'll find there are some great characters you'll warm to - even the undead ones - and there's plenty of humour and adventure rolled into the story.  Thomas Taylor has also just written Haunters, a supernatural thriller featuring three boys with special powers. This one is more suitable for 11+ readers. Thomas Taylor's claim to fame prior to writing both these exceptionally good novels is that he is also the illustrator of the original Harry Potter and the Philosopher's Stone.  How cool is that! Dan and the Dead is part of a series of Brilliant, fast-paced stories from publisher Bloomsbury with compelling plots, non-stop adventure and tons of style, at a manageable length. Perfect for newly confident readers, as well as keen readers who need to fit books in between the other demands on their attention!

The dead and the living exist side by side in this thrilling time-travelling adventure. In David's recurrent dream, Eddie seems real and it seems like he's got something to tell David. That's scary enough but then David gets picked up by a gang with a white van and finds himself spirited away from all he knows. When David wakes, he's in a new world among other dream walkers. Like him, Eddie and Adam have the special power of time-travel. David has a special role to play in this story of an original kind of haunting.  And a message from Barry Cunningham at Chicken House: I first met Thomas Taylor when I asked him to draw the original Harry Potter cover. That was when I made a mistake telling Thomas what to draw and the book went to print with the wrong picture of Dumbledore on it. If Dumbledore has a brown beard on your copy, you’re very lucky – they’re very collectable! Now Thomas is scaring the pants off me with his brilliant writing. This is the most unusual ghost story I’ve read in a long time; it actually reveals what haunting is really all about. What is this startling man going to do next? Thomas Taylor has also just written a ghostly story called Dan and the Dead in which Dan, with the help of a ghostly side-kick helps solve the problems for the undead.

Little Mouse and the Big Cupcake

Little Mouse is scurrying along one day when he finds something wonderful -- a chocolate chip, raspberry cream cupcake! It looks delicious, but it's much too big for Little Mouse to carry home on his own. So one by one, Little Mouse asks bird, frog, mole and his other friends if they can lift it. They all agree to help, but only after having a taste of the yummy cake. Will there be any left for Little Mouse once his friends have all taken a bite? A story of friendship, sharing and cupcakes with a wonderfully satisfying ending, this book is a joy to read aloud.

Other books by Thomas Taylor

September 2021 Book of the Month | On the eve of Ghastly Night, a hypnotic stage magician, Caliastra, checks in to Eerie-on-Sea’s Grand Nautilus Hotel. She’s arrived with her entourage to put on a show – and she claims to be related to Herbert Lemon. Caliastra’s act is so shadowy and strange that Herbie’s friend Violet wonders if dark forces are at work, but Herbie won’t hear a word said against his new relation.

The Eleusinian and Bacchic Mysteries illustrated

Fragments of the Lost Writings of Proclus illustrated

The Celtic Christianity of Cornwall;Divers Sketches and Studies

The Eleusinian and Bacchic Mysteries illustrated

Fragments of the Lost Writings of Proclus illustrated

The Eleusinian and Bacchic Mysteries; illustrated