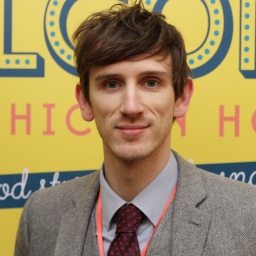 Nick Bowling is an author, stand-up comic, musician and Latin teacher from London. He graduated from Oxford University in 2007 with a BA in Classics and English, and again in 2010 with a Masters in Greek and Latin Language and Literature, before moving to his first teaching job at Trinity School, Croydon. While writing Witchborn, he has also performed a solo show at the Edinburgh festival, and has co-written, recorded and released an album and two EPs with soul-folk singer Mary Erskine, Me For Queen.

Shortlisted for the Costa Children's Book Award 2019 | A fast-paced read packed with historical detail In the Shadow of Heroes is a clever blend of intrigue, politics, crime, history and a bit of fantasy. Set in Rome at the time of Emperor Nero, it weaves some Greek mythology – the tale of the Golden Fleece – into the world of the Roman elite. When unexpected visitors turn up at Tullus’s house one night, his slave Cadmus, an educated boy slave who was taken in by Tullus after having been abandoned as a baby, knows that something dangerous is afoot. The visitors bring a box with something that is clearly very desirable in it. What can it be? When Tullus disappears and Cadman is given a message by a slave who was formerly a British princess he set off on a trail to find out what is going on. The plot is twisty and inventive ensuring that the reader remains enthralled through out.

Other books by Nicholas Bowling

SHORTLISTED FOR THE COSTA CHILDREN'S BOOK AWARD 2019 Fourteen-year-old Cadmus has been scholar Tullus's slave since he was a baby - his master is the only family he knows. But when Tullus disappears and a taciturn slave called Tog - daughter of a British chieftain - arrives with a secret message, Cadmus's life is turned upside down. The pair follow a trail that leads to Emperor Nero himself, and his crazed determination to possess the Golden Fleece of Greek mythology. This quest will push Cadmus to the edge of the Roman Empire - and reveal unexpected truths about his past ...

It's 1577. When her mother is burned at the stake for witchcraft, Alyce flees to London. But it isn't just witchfinders she has to worry about. Powerful political forces are also on her trail, dragging her into the feud between Queen Elizabeth I and Mary, Queen of Scots. As Alyce struggles to understand her own powers, she is drawn into a web of secrets, lies and dark magic that will change the fate of England ...