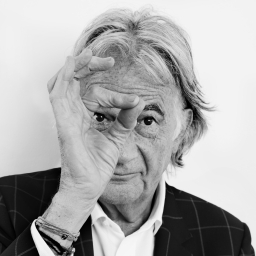 Sir Paul Smith is an internationally renowned fashion designer. The Paul Smith fashion company has flagship stores in London, Paris, New York, Milan and Tokyo, with a total of over 200 stores worldwide. It has a presence in over 70 countries. Sir Paul Smith has collaborated with a number of well-known brands including Manchester United Football Team, Anglepoise, Land Rover, New Balance and Penguin Classics.

The Adventures of Moose & Mr Brown is his first children's book.

The Adventures of Moose & Mr Brown

November 2019 Debut of the Month | Mr Moose and Mr Brown first meet on an aeroplane flying from America to London. Mr Moose should be with his brother Monty, but absent-minded Monty has got on the wrong plane. Mr Brown, who is a famous fashion designer (as is the book’s author Paul Smith), offers to help his new friend find his missing brother. As they travel the world, Mr Moose helps Mr Brown with his fashion range, suggesting some very interesting garments – parkas for penguins, sneakers for cheetahs, scarves for giraffes. As they fit out an Alaskan bear for snow-shoes Mr Brown has an idea … It all ends with a happy reunion at a big catwalk (moosewalk?) show. It’s an engaging story and very strong on the fun and satisfaction that comes from designing things and from creative partnerships. Sam Usher paints some wonderful scenes, including a witty reimagining of Hopper’s Nighthawks, 1942.

Other books by Paul Smith