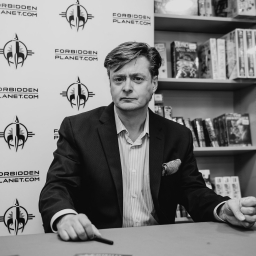 Featured books by A. J. Hartley

This exhilarating sequel to Monsters in the Mirror follows 11-year-old Darwen’s second fantastical quest. In possession of a magical mirror that acts as a powerful portal to the breath-taking realm of Silbrica, Darwen previously defeated a host of monsters that came through the mirror. He must now journey to spectacular Costa Rica to battle a terrifying tentacled beast. The stakes are high, the action is perfectly paced, and the friendship between Darwen and his companions is authentic and engaging. Alongside these essential ingredients of Middle Grade adventure, the evocation of nature and landscape is wonderful – the “rainbow-coloured waterfall, which strobed first turquoise, then emerald green, then a yellow bright as liquid gold”; trees sprouting “slim, silvery leaves that rustled like foil in the breeze”. Moreover, not only is this a gripping adventure, but it’s visually pleasing too - invitingly-designed and further enlivened by Manuel Šumberac’s atmospheric illustrations.

Taking inspiration from an inscription on a stone in Written Stone Lane, Lancashire (“RAUFFE RADCLIFFE LAID THIS STONE TO LYE FOREVER: AD 1655”), this sophisticated ghost story – the sequel to Carnegie-nominated Cold Bath Street - sees 15-year-old Preston embroiled in a classic quest to save the world from destruction at the hands of ancient spectres. Preston currently lives in the North of England in 1978, where he and a girl called Tracey bond over “Hong Kong Garden” by Siouxsie and the Banshees. Tracey doesn’t remember the past they’ve shared, “the ghost dogs and the Roman legionaries, the spectre which had emerged from the painting at the Harris Library”, while Preston “could see it all, bright and certain and real as brick and pain and darkness”. When an ancient stone is shifted, lethal ghosts are released and it falls to Preston to fix this desperately dangerous situation, with a prickling sense of suspense and shrewd interweaving of local folkloric beings.The atmosphere is enhanced by Janet Pickering’s haunting illustrations, and the language is always elegant, steady and smooth, belying the perilous situations Preston finds himself up against. Perfect for fans of Joseph Delaney and Jonathan Stroud.

Monsters in the Mirror

Eleven-year-old Darwen Arkwright's ordinary life changed forever when he was given a magical mirror, a portal to the wonderful world of Silbrica. Darwen defeated the terrible monsters released from the mirror once. Now, an even more terrifying beast has escaped through the mirror. Darwen and his friends, Rik and Alexandra, must journey to Costa Rica to save the world from a giant tentacled creature that leaves destruction in its wake. This time, old allies can't be trusted, and the danger runs deeper than Darwen could have ever imagined. The problem with doors is that they open both ways. There are monsters inside, and some of them are trying to get out ...

Preston Oldcorn is in a desolate void between life and death. In order to save his soul he must brave his greatest fear – Cold Bath Street. A ghost, gothic thriller that will keep you gripped to the end.

Other books by A. J. Hartley

Anglet Sutonga is more realistic than most teenagers, but still dreams of rising above the impoverished streets of Bar-Selehm. When an opportunity comes along, will she take it? And what does she risk in order not to throw away her shot? A novelette set before the events of A.J. Hartley's Steeplejack.At the Publisher's request, this title is being sold without Digital Rights Management Software (DRM) applied.

http://ajhartley.net/
Tweets by A. J. Hartley