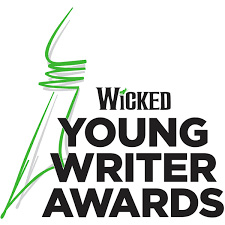 The judges in the 2019 Wicked Young Writer Awards have announced the shortlisted finalists, totalling 120, who will now progress into the last stage of the competition with the chance to win an array of exciting prizes. The competition is split into 6 categories, for entrants aged 5-25 from across the UK and Ireland, and all 120 finalists’ entries will be included in a special Wicked Young Writer Awards Anthology which will be published in association with Young Writers (www.youngwriters.co.uk). All the finalists are also invited to an exclusive ceremony at London’s Apollo Victoria Theatre, home to the musical Wicked since 2006, where judges and members of the Wicked cast announce and read aloud the winning entries in each category.

The overall winners from each category will win £50 book/eBook tokens, and the 5-14 year old winners will also receive £100 worth of books for their school library, kindly donated by Hachette Children’s Group.

Introduced four years ago, the For Good Award is given to an outstanding piece of non-fiction which recognises the positive impact that people can have on each other, their communities and the world we live in. The winner of this award will win the opportunity of work experience at First News newspaper, shadowing the editor Nicky Cox, MBE!

Winners in the 15-17 will also win an exclusive writing experience with one of the Awards’ literacy partners. The 18-25 winners also receive a self-publishing package from Spiderwize, to publish their own work. Plus the winners in all categories receive a VIP family experience at the West End production of Wicked, including ticket, an exclusive backstage tour and a meet-and-greet with members of the cast.

Cressida Cowell, author and illustrator of the How to Train Your Dragon series and Head Judge reflects on the entries:

“I love judging this competition because it is so exciting to know that you are encouraging young people to write for the joy of it. There are no rules in this competition, they can just write about whatever excites and interests them. And that’s the way to find future writers.”

Amongst this year’s finalist entries were stories, poems and non-fiction writing that showed imagination, intensity, bravery and humour often with powerful messages and an understated complexity. The older category stories showed a mature economy of language when discussing difficult subjects such as mental health issues and sexual identity, touching also on the value of unconditional friendships and the unobtainable image expected of young people on social media. The younger category stories took the judges to magical worlds with princesses, unicorns and space missions with fascinating and creative stories from time travelling with fossils, to a poignant refugee’s journey, a fable about an angry king, mythical kingdoms, a crafty sea maiden, the Muffin Man and a chilling story inspired by the Princes in the Tower.

The Wicked Young Writers Awards, were created by the producers of Wicked in association with the National Literacy Trust, and were set up to encourage and recognise excellence in writing and creativity, and help develop literacy and writing talent in young people. Since launching in 2010, with the support of Michael Morpurgo OBE and Patron HRH The Duchess of Cornwall, almost 40,000 young people have entered original and thought-provoking pieces of writing that consistently reflect the interests, concerns and deepest thoughts of young people, providing a first-look at the emerging voices of a new generation.

For the fifth year the judging panel is chaired by Cressida Cowell who is joined by Jonathan Douglas, Director of the National Literacy Trust, Michael McCabe, Executive Producer (UK) of Wicked and Nicky Cox MBE, Editor in Chief of First News (a joint sponsor of the Award prize for the ‘For Good’ category).

In recognition of the huge growth in poetry buying and writing amongst young people, this year the judges this year include two poets, Inua Ellams and Hussain Manawar. Hussain commented: “I was very impressed by the use of vocabulary, imagination and style of writing in the awards. I also found the range of people from different backgrounds who entered refreshing.”

Schools are very much encouraged to get involved with the Wicked Young Writer Awards and the three schools that submit the most entries will also win a Creative Writing Workshop for their school for up to 30 students.

Find out more about this award at www.wickedyoungwriterawards.com which also has tips on writing, and ideas & resources for lessons in schools. You also find all the category finalists listed.

The winners will be announced on Thursday 20 June 2019 at the Awards ceremony and celebration at London’s Apollo Victoria Theatre, home of the long running hit musical. 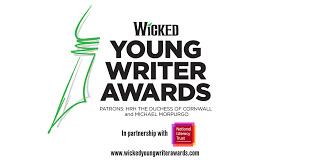