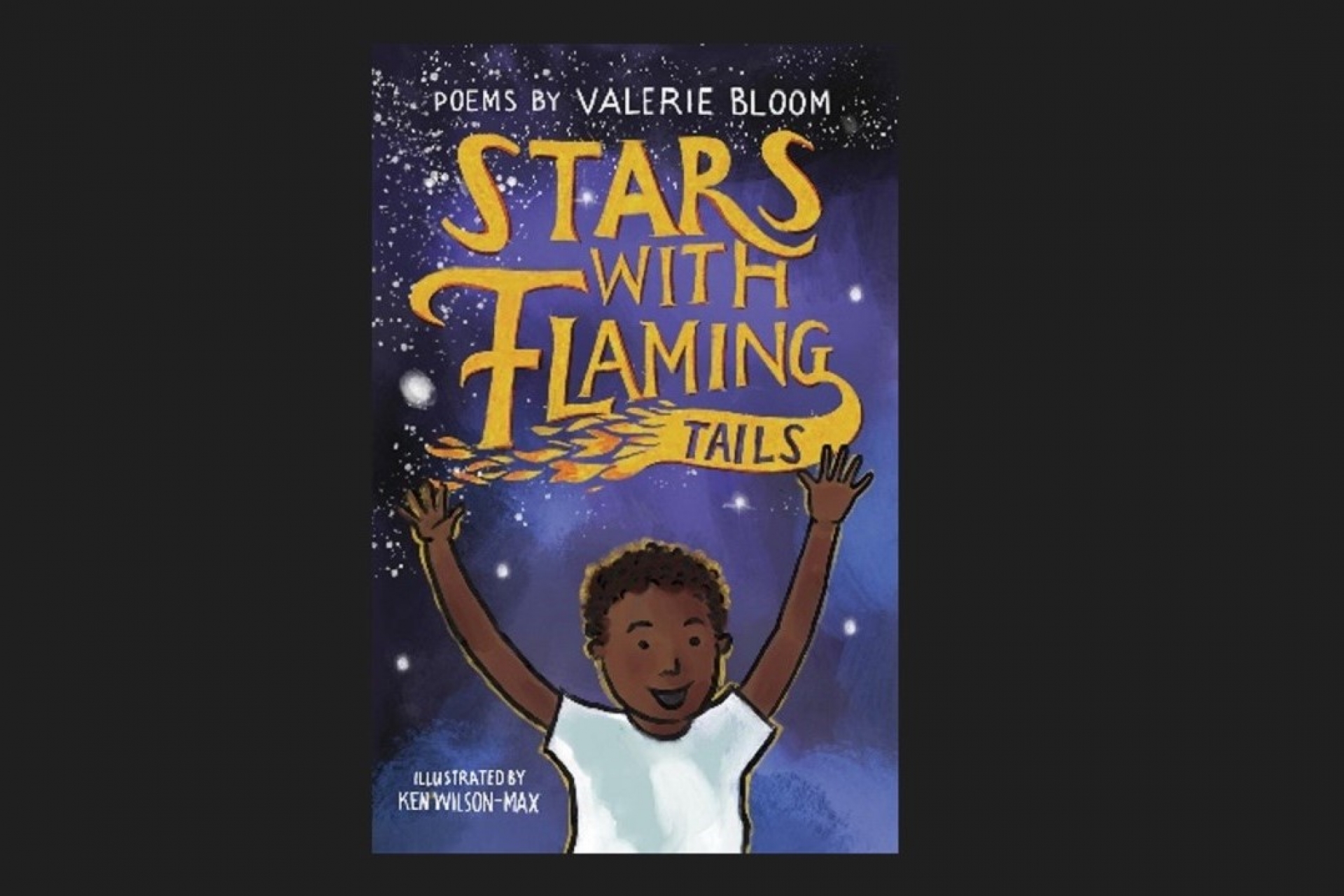 The winner of the UK’s only award for published poetry for children, the CLiPPA (CLPE Children’s Poetry Award) was announced on Friday 8th July 2022 in a ceremony at the Southbank Centre’s Queen Elizabeth Hall. The show featured performances from all the shortlisted poets, children from schools across the UK and live illustration by former Children’s Laureate Chris Riddell.

The award was announced live by Michael Rosen at an exuberant Poetry Show attended by and starring children from schools across the UK.

The CLiPPA was awarded to poet Valerie Bloom for her collection Stars with Flaming Tails, illustrated by Ken Wilson-Max (Otter-Barry Books). Stars with Flaming Tails is a beautifully varied collection with poems on family, friends and animals, and Bloom approaches each poem with rare empathy and much lively humour. She also plays with poetic forms, exploring riddles and reverse verse and including a cinquain and rondel in a section entitled Fun with Forms.

Though Valerie Bloom has written and edited several volumes of poetry for children and adults, receiving an MBE for services to poetry in 2008, this is the first time she has won the CLiPPA.

Valerie draws on her Caribbean background in her poetry and believes that poetry helps us make sense of our world. She has described poems as mirrors and windows enabling children both to see themselves reflected and to look into others’ lives.

Poet Philip Gross, chair of the judges, said “Stars with Flaming Tails is like a passport to the whole world, and beyond. This is poetry that can go anywhere, from the personal to the planetary, the surreal to the scientific, with its invitation to us all to look, and to laugh, to listen to our feelings, and to think. And meanwhile, almost without noticing it, we’re being handed the keys to the craft of writing for ourselves.”

The 2022 shortlist reflects the extraordinary vitality of the UK’s poetry publishing for children. Publisher of Stars with Flaming Tails, small independent, Otter-Barry Books, had two other books on the list, Being Me, a collection of poems dealing with worries and anxieties by Liz Brownlee, Matt Goodfellow and Laura Mucha and Caterpillar Cake, also by Matt Goodfellow, a book of read-aloud poems for the very young. Birmingham-based The Emma Press is represented with Cloud Soup, a new collection from the 2017 CLiPPA winner Kate Wakeling, and Manjeet Mann makes the shortlist for the second year in succession, this time with her Costa Book Award winning verse novel The Crossing, published by Penguin.

As well as celebrating outstanding poetry, the CLiPPA encourages schools to explore the shortlist with their pupils through its Shadowing Scheme, each year prompting poetry performances by thousands of children in hundreds of classrooms across the UK. This year’s CLiPPA was celebrated at a special event at the Southbank Centre’s Queen Elizabeth Hall, hosted by poet and 2021 CLiPPA winner Michael Rosen. Children from schools across the UK made up the audience with young winners of the Shadowing Scheme performing poems from each of the shortlisted collections live on stage alongside the poets.

Louise Johns-Shepherd, Chief Executive at CLPE said, “Valerie’s inspiring collection invites children to engage with poetry in so many different ways and speaks beautifully to all realms of human experience. It deserves to be in every book corner and library in the land.  After the difficulties of the last two years it has been such a joy to celebrate this amazing shortlist with live audiences and at each event we have seen the enthusiasm and excitement for poetry bubble and fizz. Children’s poetry is such an important but often underrated literary form and we could not be more delighted to be celebrating the very best of poetry for children at the Southbank Centre’s Queen Elizabeth Hall with such an enthusiastic and engaged audience.”

Valerie Bloom receives a trophy and a cheque for £1000. As part of the prize she will also be recorded for the prestigious National Poetry Archive.

The CLiPPA is delivered in partnership with the Authors’ Licensing and Collecting Society (ALCS) and supported by Arts Council England.

Explore the 2022 CLiPPA shortlisted titles over on our awards page.

And read all about the 2021 winner here.