LoveReading View on The Unlikely Adventures of Mabel Jones

Shortlisted for The Branford Boase Award 2016. One of our Books of the Year 2015 - June 2015 Debut of the Month  Mabel Jones is sleeping soundly when a sudden noise wakes her up. It’s Omynus Hussh, silent loris and pirate, there to press gang her into service to the captain of the Feroshus Maggot, mad wolf (he really is a wolf) Idryss Ebenezer Split. Mabel will have lots of adventures before she can return to the ‘hooman’ world! Part Pirates of the Caribbean, and with a touch of Monty Python thrown in, this is a wildly inventive, hugely enjoyable adventure that must qualify as the year’s best book to read aloud. Piracy, says the narrator, ‘It’s not all golden doubloons and swinging from chandeliers. It’s not all drunken shanties and dancing on a dead man’s chest. Not by a long plank.’ Irresistible! ~ Andrea Reece

The first book by brilliant new comic author, Will Mabbit. When Mabel Jones unknowingly commits 'The Deed' she finds herself swiftly bundled into a sack and carried off to the pirate ship the Feroshus Maggot. Crewed by the strangest bunch of pirates you would ever want to meet and captained by the dreaded Idryss Ebeneezer Split (a wolf with a false leg carved from a human thighbone, a rusty cutlass sheathed in his belt and a loaded pistol tucked in his pants with no fear of the consequences), the Feroshus Maggotwhisks Mabel Jones off on the adventure of a lifetime. 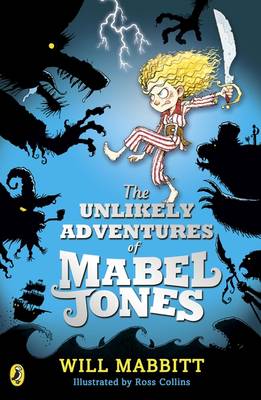