A funny and achingly poignant portrayal of the identity crises, family conflicts, and hopes of a British-Chinese teenager in the 1980s

September 2019 Debut of the Month

Jo is the kind of open, honest, amusing character readers immediately care about. Told through her wittily illustrated diary, Jo’s tale begins with a(nother) upheaval. She and her family have just moved to their new Chinese takeaway, but her hopes for a fresh start are immediately dashed when she sees there’s no living room, and she has to share a room with little sister Bonny while big brother Simon lives with their grandparents.

Jo’s experience of feeling “doubly different” is poignantly portrayed – she’s an outsider at school because she’s Chinese, and an outsider among her wider Chinese family because her own family is dysfunctional, and because she doesn’t speak the same language. Thank goodness, then, that she forms a friendship with fellow outcast, Tina the Goth, who stands up to racist school bullies. But while Jo begins to feel hopeful about her future and takes steps towards realising her dream of working in fashion, she and Bonny are increasingly neglected by their parents, and then there’s Dad’s aggressive outbursts.

The mid-1980s setting prompts many amusing references, from ra-ra skirts and Gary Kemp’s perm, to sending drawings to Take Hart and going to Wimpy for a Knickerbocker Glory  - but above all this is a highly readable, highly empathetic, impactful novel about familial abuse and neglect, trying to fit in, and finding your way in the world. Based on her own experiences, author Sue Cheung’s big-hearted story will chime with readers of 12+ who know how it feels to fall between cracks and dream of a different life.

A message from the author, Sue Cheung; “You know when you want to pretend some things just never happened? Well those things, that happened in my childhood, have been dug up and compiled for all the world to see. Although the experience of illustrating and writing about my past has saved me paying for an expensive course of therapy – so that’s a plus. The other plus is
I’ve learned that ultimately, my story needs to be heard, so others going through the same things can think ‘Oh, so I’m not the only crazy kid here... phew.’'

It is difficult trying to talk in our family cos: a) Grandparents don't speak English at all b) Mum hardly speaks any English c) Me, Bonny and Simon hardly speak Chinese d) Dad speaks Chinese and good English - but doesn't like talking. In other words, we all have to cobble together tiny bits of English and Chinese into a rubbish new language I call 'Chinglish'. It is very awkward.

Jo Kwan is a teenager growing up in 1980s Coventry with her annoying little sister, too-cool older brother, a series of very unlucky pets and utterly bonkers parents. But unlike the other kids at her new school or her posh cousins, Jo lives above her parents' Chinese takeaway. And things can be tough - whether it's unruly customers or the snotty popular girls who bully Jo for being different. Even when she does find a BFF who actually likes Jo for herself, she still has to contend with her erratic dad's behaviour. All Jo dreams of is breaking free and forging a career as an artist.

Told in diary entries and doodles, Jo's brilliantly funny observations about life, family and char siu make for a searingly honest portrayal of life on the other side of the takeaway counter.

I really loved this story, it's hilarious and really heart breaking at the same time ... a story of tragedy, abuse, neglect and hope. I think it's amazing -- Lucas Maxwell - Portable Magic Dispenser

Chinglish is one of the best #ownvoices stories out there in UKYA right now. Chinglish was belly-achingly funny, heartbreaking, tender and unflinchingly honest all at the same time. I couldn't put it down -- Alix Long - Delightful Book Reviews

By turns hilarious and tragic - The Bookseller 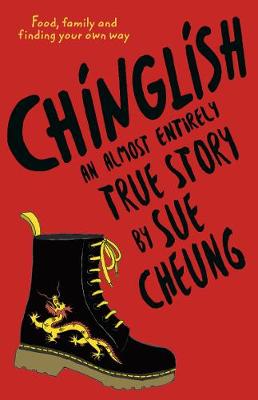 Sue Cheung was born in the Midlands and spent her early years clowning about and busily scribbling and drawing. At the age of 16 she seized her chance to become an artist by winning a scholarship to the London College of Fashion. Later, Sue went into advertising and worked her way up to Art Director. She now freelances as a designer from her home in Bournemouth, where she writes and illustrates children's books.