Robot adventure with real heart, by the inimitable Frank Cottrell-Boyce

No matter how exciting, zany and surprising the action, you can always be sure that Frank Cottrell-Boyce will build his stories on real human emotions, and that’s as true of this brilliantly funny, original and touching novel as of any of its predecessors. Alfie ‘swerves’ both school and the Limb Lab, where he should be going to learn how to control his state-of-the-art new hand, by hanging out at the airport. But everything changes when, through various happy accidents, he finds an enormous robot called Eric in Lost Property. Eric holds the Allen key to the book’s mysteries, both a generations-old legend, and the secrets that Archie is keeping from the reader and himself. Beautifully told and full of characters readers will love, this book will have you laughing out loud one minute, in tears the next. Robot Eric, unfailingly polite, kind and helpful and trying to explain himself through misremembered jokes is an iron man for our time. Unmissable.

Once readers have finished this, point them in the direction of Frank Cottrell-Boyce’s other books including The Astounding Broccoli Boy and books by Ross Welford. Peter Brown’s story The Wild Robot is another great automaton adventure.

Runaway Robot is a funny and heartwarming adventure about two best friends helping put themselves back together, from the award-winning Frank Cottrell-Boyce, illustrated by Steven Lenton. When Alfie goes to Airport Lost Property, he finds more than he bargained for. A lot more. Because there's a giant robot called Eric hidden away on the shelves. Eric has lost one leg and half his memory. He's super strong, but super clumsy. He's convinced that he's the latest technology, when he's actually nearly one hundred year's old and ready for the scrap heap. Can Alfie find a way to save Eric from destruction - before Eric destroys everything around him?

Confidently written with heart and humour, the unputdownable Runaway Robot will have children roaring with laughter and wanting a best friend robot of their own! - Armadillo

Cottrell-Boyce writes with confidence and flair, spilling his story into the reader's head with artistry and comedy, so that readers are equally amused and enthralled, but also touched with a large brush of heart. He has a keen eye for human quirks, and seeing them play out both robotically as well as in humans, is rather fun. And Steven Lenton's illustrations create that extra dimension of humour. - Minerva Reads

I was really looking forward to reading this book and I can honestly say I was not disappointed. This is a tale of humour, humanity and two friends trying to get to the truth - Books For Topics

Frank's imagining of this futuristic world where pizza ovens deliver your pizza and driverless buses is really brilliant. Strangely it feels like you could touch it, it's so close and yet in my mind it still feels like a lifetime away. For me that made the story feel more real and added to the warmth I felt about this compelling tale. The characterisation is genuinely brilliant and wonderfully diverse - BookLover Jo

Storytelling at its snortingly-funny, hugely enjoyable and heartily-emotional best... a little bit warm and wise, a little bit tender and touching; there is a LOT to love about this book - The Reader Teacher

A brilliantly observed and sensitively written story about two unlikely best friends who help rebuild each other. There were plenty of moments which really made me chuckle but also some shocking reveals and scenes which made my bottom lip tremble a little. I would definitely recommend it for readers aged 8+ - Library girl

A funny and heartwarming adventure - Ni4Kids

The world he imagines is cleverly conceived and the spirit of fun and adventure is pure Cottrell Boyce, but there are also messages about acceptance and diversity, tucked away between the madcap antics, which will resonate with readers of every age. Expect plenty of laughs, some unexpected twists and turns, and a big smile as the last page turns. - Lancashire Evening Post 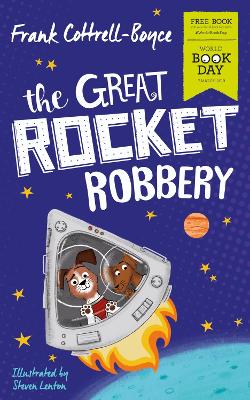