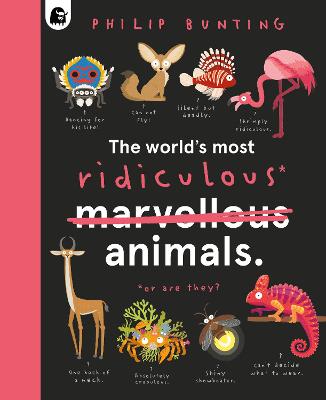 The World's Most Ridiculous Animals

"A guide to the world’s most amazing animals, with quirky facts and some made up laugh-out loud Latin names"

Prepare to meet some of the world’s most amazing animals, each of them adapted to survive in ways that are marvellous but, according to the cheeky narrator of this unusual information book, a bit ridiculous. Take the Mexican Mole Lizard for example, which looks like a long pink worm except that it has a pair of mole-like forelegs; weird, but great for digging beneath the sands of Central America.

There are lots more wonderful creatures too from the macaroni penguin to the very cute but venomous pygmy slow loris. Each animal is illustrated in colour, the illustrations accompanied by paragraphs of lively fact-filled text and quirkier, jokey labels courtesy again of our playful narrator, who also edits the Latin names for each animal in humorous ways, so that the common wombat, or vombatus ursinus becomes cubus poopus (the text also helpfully explaining why wombat poo is uniquely dice shaped). The combination of animal facts and humour make this very appealing and the illustrations are very attractive too.

The World's Most Ridiculous Animals Synopsis

This witty, quirky, colourfully illustrated and fact-filled book features some of the most absurd and flamboyant animals on the planet!

The second title in the series from the hilarious Philip Bunting is filled with facts about some of the weirdest creatures in the natural world. The antagonist voice (speaking though cheeky annotations) points out the apparent ridiculousness of each creature's features, while the narrator's voice describe the evolutionary reasons or advantages for each animal's extraordinary characteristics.

With hilarious text throughout and bright, contemporary illustrations, this guide to ridiculous animals contains funny labelled diagrams and will help teach kids about evolution by studying some of its most wild products!

Praise for The World's Most Pointless Animals..Or Are They?;

'A hilarious guide to the planet's most absurdly awesome animals, full of quirky facts and touching on the importance of diversity and conservation.' -- Fiona Noble  The Bookseller

'The combination of bold illustrations, and the mixture of facts and humour make this a very attractive book.'  Armadillo Magazine

'This collection of strange and unusual animals from around the world is an enjoyable factfile with lovely illustrations and an amusing read thanks to its rogue narrator, who shares jokey facts and silly names for each animal.'  BookTrust

'A treasure trove of hilarious information, informative facts and incredible illustrations...the illustrations are both beautiful and funny and really make this a very special book. It deserves a spot in any library.'  The School Librarian

Philip Bunting's books have been translated into multiple languages, and published in over 25 countries around the world. Since his first title was published in 2017, Philip has received multiple accolades, including Honours from the Children's Book Council of Australia, and making the list for the Kate Greenaway Medal in 2018.

His titles include Mopoke and How Did I Get Here? Philip's work deliberately encourages playful interaction between the reader and child, allowing his books to create a platform for genuine intergenerational engagement, and fun.

More About Philip Bunting
Add To Wishlist
Buy from our bookstore and 25% of the cover price will be given to a school of your choice to buy more books. 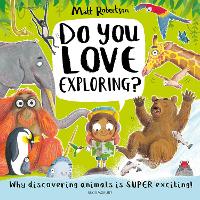 Do You Love Exploring? 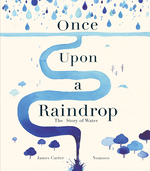 Once Upon a Raindrop