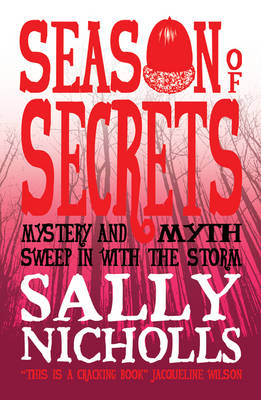 A haunting and unforgettable novel from the award-winning author of Ways to Live Forever. Season of Secrets weaves the tale of a heartbroken child and an age-old legend into beautiful story of love, healing and strange magic. Resonant of classics such as The Owl Service by Alan Garner, Whistle Down the Wind by Mary Hayley Bell and Skellig by David Almond, the protagonist’s story is told in the pure, clear voice we have come to expect from this astonishingly accomplished and powerful young writer. Sally Nicholls is simply an exceptionally talented writer, who writes beautifully. Her intelligent, warm fiction is honest and profound, complex yet accessible.

On a wild and stormy night, Molly runs away from her grandparent's house. Her dad has sent her to live there until he Sorts Thing Out at home. In the howling darkness, Molly sees a desperate figure running for his life from a terrifying midnight hunt. He has come to help her. But why? And who is he? Season of Secrets weaves the tale of a heartbroken child and an age-old legend into a haunting story of love, healing and strange magic.

'Poignant and gripping' - The Bookseller

More About Sally Nicholls
Add To Wishlist
Buy from our bookstore and 25% of the cover price will be given to a school of your choice to buy more books.