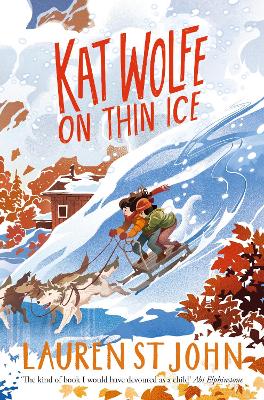 Join Kat Wolfe and her best friend Harper Lamb on the winter holiday of a lifetime in Kat Wolfe on Thin Ice - full of mystery, intrigue, snow and huskies, by bestselling author Lauren St John! Kat and Harper can't wait to join their parents on a winter vacation in a mountain cabin in the US. But a series of misadventures result in them being in the wrong place at the wrong time. Alone. When Kat discovers that an argument she witnessed in New York City holds the key to a major crime, she's certain that it's only a matter of time until the culprits come looking for her. With a snow storm moving in and no way out, all that stands between the girls and disaster are a team of eight huskies and one impossible raccoon.

Lauren St. John grew up surrounded by horses and wild animals on a farm and game reserve in Zimbabwe, the inspiration for her memoir, Rainbow's End. After studying journalism, she relocated to the UK, where she spent nearly a decade on the European and PGA Tours as golf correspondent to the Sunday Times. She also wrote the acclaimed music biography Hardcore Troubadour: The Life & Near Death of Steve Earle. She is the author of the multi-award-winning The White Giraffe series for children, as well as the Laura Marlin mysteries, the first of which, Dead Man's Cove, won the 2011 Blue Peter Book of the Year Award. Her bestselling One Dollar Horse series was followed by YA horse romance, The Glory, now optioned for film. Kat Wolfe on Thin Ice is the third mystery in the critically-acclaimed Wolfe and Lamb series published by Macmillan Children's Books.

More About Lauren St John
Add To Wishlist
Buy from our bookstore and 25% of the cover price will be given to a school of your choice to buy more books.