Jason Rohan has worked as a staff writer for Marvel Comics in New York and as an English teacher in Japan, where he lived for five years. He returned to the UK and now lives in West London with his wife and five children. 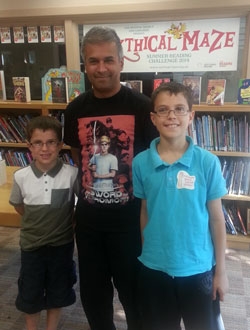 Reader Review panel members  Alexander, age 9 and Daniel, age 7 were very excited to meet Jason when he was he was holding a workshop at their local library.

A Q&A with Jason about his novel, The Sword of Kuromori

1. How did you get the idea for this book?

I wanted to write a contemporary fantasy adventure with mythical elements, but I didn’t want to use anything that had been done before or was already familiar to a western audience. Having spent five years in Japan, it made sense for me to have a closer look at Japanese folklore, which is vibrant and colourful. It was while I was doing my research that a number of elements fell into place and the story came together.

2. How would you describe the book?

It’s a fast-paced thrill-ride, full of monsters, magic and mayhem. The setting of modern Japan is both familiar and foreign. As the main character is newly arrived, there are lighter moments of cultural misunderstanding to balance out some of the more serious themes.

3. Which is your favourite character/theme in the book?

One of the underlying themes is about taking charge of your own life. The choices we make determine who we are and who we become. Kenny, the main character, has a lot of excuses for avoiding difficult decisions and in some ways would like to avoid growing up and taking responsibility. However, in life, sometimes we are forced to make decisions and we have to manage the consequences.

4. How long did it take you to write this book?

About five months for the first draft, while working full time at my day job.

5. How did you do the research for it? Where did you look/go?

There’s a wealth of information on the internet these days, and Wikipedia is always a good place to start with any subject. Once I had an overview of Japanese folklore, I was able to drill down into details of specific myths, legends and creatures. My Japanese is rusty but it was still able to help me work through some Japanese language websites.

In addition to this, I picked up lots of books of Japanese folk tales and legends, some of which were written over a hundred years ago.

Finally, I spent a lot of time poring over  Google Maps, guide books and photos to remind myself of my old haunts in Tokyo and beyond. I left a long time ago and I knew some of these would have changed.

6. What other books have you written?

I have three other books languishing in a drawer waiting to see the light of the day, and a few articles in print, but The Sword of Kuromori is my first published novel.

Science meets Myth when ogres armed with high-tech weaponry steal a huge telescope as part of an insane plan to cast the world into permanent darkness. With global catastrophe looming, Kenny and Kiyomi take the fight to the enemy, even if it means going out of this world. But all is not well between the friends. Kiyomi's behaviour is growing increasingly erratic and it soon becomes clear that her life - and her humanity - are in danger. Kenny is faced with an impossible choice - does he save his friend or fulfil his duty?

May 2014 Debut of the Month  Fans of Alex Rider will love the deadly adventure in which Kenny Blackwood finds himself. When Kenny sets out to visit his father in Japan, he has no idea of the excitement that is in store. The letter he is handed on the flight is mysterious enough especially when it turns out that he is the only person who can see the strange creature in the overhead locker. Once he has landed, things get very strange indeed and soon Kenny finds he is a boy with a terrifying mission to fulfil – in only 9 days!

Other books by Jason Rohan