Kate Hindley studied illustration at Falmouth College of Art, and went on to work for two years as a children's print designer at a studio in Northampton, whilst working freelance on children's books and greetings cards. She has exhibited with her good chums Girls Who Draw and Inkygoodness across the UK, and had a jolly good time painting up a totem pole for the Pictoplasma Character Walk exhibition 2011. Kate's first picture book The Great Snortle Hunt, written by Claire Freedman, was longlisted for the 2013 Kate Greenaway Medal. Since then Kate has provided illustrations for picture books including The Littlest Yak, How to Wash a Woolly Mammoth, You Must Bring a Hat, The Same But Different Too, The Night Before Christmas in Wonderland, The Littlest Yak and The Queen's Wardrobe as well as books for older children like The Royal Rabbits series and The Girl With the Lost Smile by Miranda Hart. Julia Golding is the award-winning author of numerous books for children and adults, including The Queen's Wardrobe and The Diamond of Drury Lane, winner of both the Waterstones Children's Book Prize and the Nestle Smarties Book Prize. A former British diplomat and Oxfam policy adviser, Julia also has a doctorate in English Literature from Oxford University, and was writer-in-residence at the Royal Institution in 2019. Her Jane Austen-themed podcast 'What Would Jane Do?' offers a 19th century take on modern life. Michele Clapton is a BAFTA and Emmy award-winning costume designer who has worked on acclaimed films and television series including The Secret Garden, Game of Thrones and The Crown. 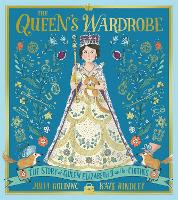