The Amazing Tale of Ali Pasha

LoveReading View on The Amazing Tale of Ali Pasha

An evocative WW1 story of heroism and friendship, based on real events.  Ali Pasha was a tortoise celebrity, appearing on Blue Peter and in newspapers worldwide, including The Times and The Boston Globe. Retold through journal entries and through Henry’s accounts to a young reporter, Ali’s story has stunning colour illustrations throughout.

On 6th May 1915, Henry Friston, a 21-year-old seaman, rejoined his battleship after ten days in Hell. Hell was just 180 metres long and seven metres wide and was otherwise known only as ‘X Beach’, Gallipoli. Henry, ferrying the wounded from the battlefield, had not eaten or slept for three days. Then, somehow, in the midst of the bombardments, he met an unlikely companion – a tortoise.

During WWII Michael Foreman lived above his mother’s village shop in Pakefield, just south of Lowestoft in Suffolk.  Michael particularly remembers a bus driver who drove the local chocolate-and-cream coloured buses.  His name was Henry Friston.

After the war Michael met Henry’s son, Don who in turn introduced Michael to their tortoise, Ali Pasha.  Apparently Ali would eat almost anything except for tomatoes.

The story of how Ali Pasha came to live in Suffolk with the Friston family slowly unfolded.  Henry Friston – as a young sailor in WWI had found the tortoise on the beaches at Gallipoli in 1915.   Michael Foreman discovered that Ali Pasha’s life story was a remarkable one – being awarded a coveted Blue Peter Badge and obituaries in The Times  and Daily Telegraph when he died well into his nineties … “The Tortoise Veteran of Gallipoli”

Michael has now told the story of Ali Pasha complete with his trademark watercolour illustrations and has dedicated this book to his life-long friend Don Friston, who told him his father Henry’s story.

“This touching story will live on for generations to come”  Michael Morpurgo, author of War Horse 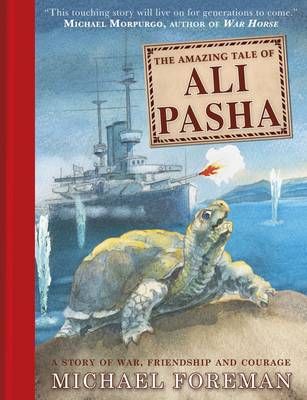 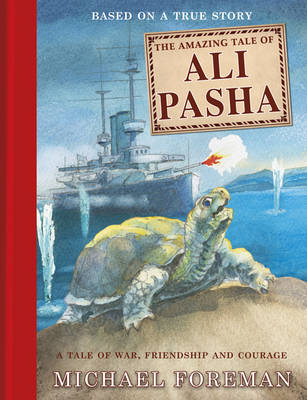