As exciting as ever with even more action and suspense, boy hero Alex Rider is back for his eighth spectacular adventure.  When Alex finds himself in great danger he turns to MI6 for protection. They are willing to help – but they want something in return. Alex is sent to spy on some GM crops where he comes across a villain with a deadly mission. When he knows Alex is on to him he tries everything to stop him. The question is, can Alex prevent him from wiping out an entire country with his deadly plot? There are lots of gadgets, as ever but you'll have to read the book to find out what they are!

In the eighth book in the number one bestselling Alex Rider series by Anthony Horowitz, Alex meets international do-gooder Desmond McCain. But a simple card game between them rapidly leads to a duel to the death - one that could result in the destruction of an entire country.

Targeted by a hitman and under threat of his past being exposed by the media, Alex reluctantly turns to MI6. But their help doesn't come cheap: they need Alex to spy on the activities at a GM crop plant. There he spots Desmond McCain, a high profile charity organiser, who realises that Alex is on to him and the real plans for the money he's raising. Kidnapped and whisked off to Africa, Alex learns the full horror of McCain's plot: to create an epic disaster that will kill millions. Forced to ask MI6 for protection, Alex finds himself being manipulated in a deadly game that could lead to the destruction of an entire East African country. 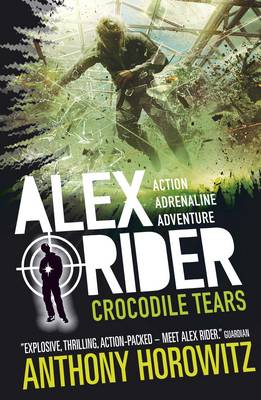