Shortlisted for the Branford Boase Award 2017 |  Shortlisted for YA Book Prize 2017 | Longlisted for the Guardian Children's Fiction Prize 2016 When Fifteen-year-old Wulliam's father is possessed by a dark spirit, Wull hears that a cure for Pappa's illness lurks in the belly of a great sea-dwelling beast known as the mormorach, and so he embarks on an epic journey down the river that his family has so long protected - but never explored.

The Branford Boase Award Judges' Comments - ‘a gripping original, brave and ambitious’; ‘a wonderful use of vocabulary, neologism and dialect, and the sense of a realised world’; ‘there’s so much going on but many really touching moments’.

Fifteen-year-old Wulliam is dreading taking up his family's mantle of Riverkeep, tending the river and fishing corpses from its treacherous waters. But then everything changes. One night his father is possessed by a dark spirit, and Wull hears that a cure lurks deep within the great sea-beast known as the mormorach. He realizes he must go on an epic journey downriver to find it - or lose Pappa forever.

A cracking, startlingly original story ... It would be an extraordinary book by any author - but it is Martin Stewart's first Spectator

A relentlessly brilliant supernatural debut ... Stylish, precise, limitlessly evocative of landscape, atmosphere, guilt and terror. His characters lived for me by the end Guardian

Riverkeep is utterly engrossing. There are elements of Game of Thrones in the grittily realised violence and it has the strange magic of Earthsea. The prose is by turns dense, sensuous, and funny, but never less than gripping. A superb debut novel -- Anthony McGowan, award-winning author of The Knife that Killed Me and Henry Tumour

Stewart's opening is both dramatic and touching, as fifteen-year-old Wull, reluctantly destined to succeed his father as the 'riverkeep', watches his own father disappear beneath the water when a freakish monster grabs him and takes him below. The writing is both visceral and highly visual. It's a remarkably assured debut ... written by someone utterly confident in the reality of the world he has created and in the appeal of his characters Herald Scotland

A truly extraordinary, rich and vivid debut. Martin has built a world and concocted a story you can get lost in - this is one of the most engrossing books I've read this year, and I loved every second of it. One for fans of Pratchett and Gaiman -- Robin Stevens, author of Murder Most Unladylike

Remarkable ... A rich and vivid fantasy world with a full cast of memorable characters and fantastical beasts Scottish Librarian 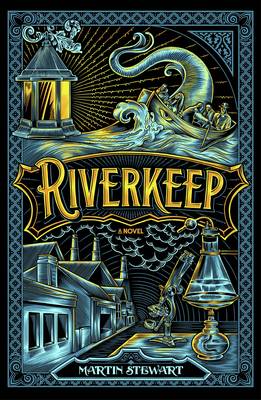 Martin Stewart has previously worked as a recycling technician, university lecturer, barman, golf caddy, and English teacher. Having written his first book on Post-Its as an eight year-old, it was his time back in the classroom that made him understand the unique joy of writing for younger readers. A native of Glasgow, where he still lives, he enjoys buying books to feed his to-be-read pile, and combining the city's urban splendour with walks on the beaches of Scotland's west coast. Riverkeep is his first novel.

View All Books By Martin Stewart