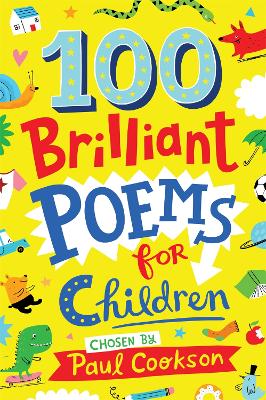 Paul Cookson’s collection does not claim to be the definitive hundred brilliant poems, but it comes close; providing a fun, inspiring and diverse introduction to poetry for children. Not only are the classics of Shakespeare, Wordsworth and Whitman out in force, but Cookson also introduces the delights of brand new poetry.   His own poem ‘Let No One Steal Your Dreams’ is a beautiful and empowering opening, offering a message of encouragement that lingers in the mind as you read on. A collection to dip into before bed-time or to devour whole, which both children and adults will relish.

A message from Gaby Morgan, Editorial Director at Pan Macmillan A gorgeous pick-and-mix packed with long-term favouries, song lyrics and brand-new delights.  reading it out loud wull guarantee joy! It also includes some handy hints and starting points for reading, writing and performing at the back.

A message from Paul Cookson  Hello and welcome to 100 Brilliant Poems for Children. There will never be a definitive hundred brilliant poems . . . but I know that these are a hundred brilliant poems.  I wanted to choose poems that have some sort of longevity: poems that are already classics, poems that are modern classics and poems that I feel will have a life beyond this book and become classics in their own right.
The collection starts with my own ‘Let No One Steal Your Dreams’ – in fact, the idea for the collection started with that poem. It’s that feeling we are looking for – poems that inspire, and that are aspirational and entertaining in every way. I’ve chosen poems by my favourite poets, poems that I wish I’d written, poems that I’ll be forever jealous of and poems that have inspired me. I also wanted to include a few pieces that haven’t been seen before in a book for children. Words that have meant something to me, words that have touched me at particular times. I say words – as some of them began as songs I’ve played again and again, but with words that I feel work well as stand-alone poems. Not many songwriters are poets, but some are and I’ve included a few here – Billy Bragg, Michael McDermott, Nigel Stonier, Martin Stephenson, Henry Priestman (The Christians), Miles Hunt (The Wonder Stuff) and Stan Cullimore (The Housemartins). Check them out – I hope you like them. No, I’ll rephrase that – I hope you love them. Enjoy!

From Paul Cookson comes 100 Brilliant Poems For Children, featuring the best of the absolute best. The essential poems for every child to read and enjoy.

Paul has been a poet for over twenty-five years, has written and edited over sixty collections, sold over a million books and visited thousands of schools, libraries and festivals all over the world. He is the Poet in Residence for the National Football Museum in Manchester, and his work has appeared in over 200 anthologies, on school posters, art installations, beer mats and even burger napkins.

He lives in Retford with his wife, two children, a dog, a room full of books and music, and too many ukuleles.

More About Paul Cookson
Add To Wishlist
Buy from our bookstore and 25% of the cover price will be given to a school of your choice to buy more books. 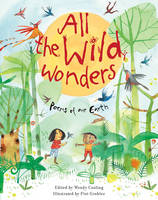 All the Wild Wonders

I Love My Mum 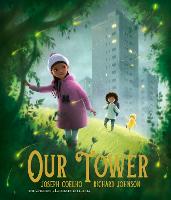