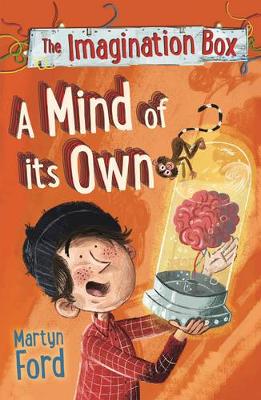 The Imagination Box: A Mind of its Own

Timothy Hart has had some amazing adventures in the course of the award-winning The Imagination Box series; thanks to a gadget in his brain, anything he imagines can become real. At the start of this book however, he chooses to have that ability closed down, but his last imagining (sometimes Tim can’t help showing off) is a replica of his own brain and when that falls into the wrong hands, trouble follows. Tim finds himself in an alternative universe, facing an arch enemy. It’s another hugely entertaining adventure, filled with moments of real excitement and drama, and also very funny. Beneath the action and comedy, really interesting questions are posed about science and technology and responsibility. ~ Andrea Reece

The Imagination Box: A Mind of its Own Synopsis

There was a sabre-toothed tiger in the playground. Wandering thoughts, Tim had come to realise, were extremely dangerous things.

Nearly a year has passed since Tim, Dee and Phil the finger monkey (with the help of some fire-breathing bear-sharks) defeated Wilde Tech Inc and destroyed the imagination space. But since then, it's become increasingly clear that there's something wrong with Tim. His imagination seems limitless - anything he imagines immediately appears in front of him, with no need for the imagination box. Which has both good and bad consequences.

Then, in the blink of an eye, everything changes. Tim wakes up and discovers he's in his old orphanage. No one, not even Dee, knows who he is. He's completely alone - his worst nightmare. But soon he realises who is to blame. His old enemy, Clarice Crowfield, has hijacked a new, all-powerful machine and created a reality where she is in charge! Tim must find Professor Eisenstone, convince Dee that they really are best friends (and, of course, recreate Phil) - then literally put their world to rights.

'Here’s an entertaining, high-tech spin on the genie fable... The Imagination Box is children’s fiction in the classic mode, with double crosses, deceitful adults and narrow escapes all meshing into a solid mystery plot. Yet there’s a dark undercurrent too, and a timeless be-careful-what-you-wish-for message.' - James Lovegrove, Financial Times

'A hugely entertaining adventure with plenty of action, comedy and genuinely scary moments.' - We Love This Book

'Hilarious and extremely enjoyable. This comic story will appeal to both boys and girls and will definitely make readers laugh.' - Books for Keeps

'A splendid adventure, hilarious and harrowing in turn and so strongly cast that even the precocious pocket primate doesn’t steal the show.' - Kirkus Reviews, Starred Review

Martyn Ford is a 28-year-old journalist from Hampshire, where he writes for the Bordon Herald. His first book, It Happened to Me, a collection of shocking true stories, was published in 2010 by Summersdale. In 2011 Martyn's TV script was in the finals of the BBC Laughing Stock Competition and he has since been in talks with the BBC about his writing. His debut, The Imagination Box, received huge critical acclaim, which was followed by The Imagination Box: Beyond Infinity. This is the final book in the series.

More About Martyn Ford
Add To Wishlist
Buy from our bookstore and 25% of the cover price will be given to a school of your choice to buy more books.