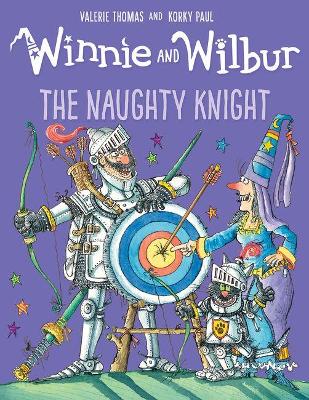 Winnie and Wilbur: The Naughty Knight

The irrepressible Winnie the Witch and her cat Wilbur climb onto their broomstick again for a new adventure. Flying over a castle Winnie decides to take a closer look and is disappointed to find it’s in rack and ruin. But it only takes a wave of her wand and - Abracadabra! – it’s full of ladies and knights again and mid-tournament. Wilbur makes quite an impression in a cat-size suit of armour especially with Winnie lending a magic helping hand. These are two of the most entertaining characters in children’s books and Valerie Thomas has the relationship between them down to a tee. As ever too Korky Paul works his own special magic, filling the pages with extravagant humorous detail and embellishing the straightforward text to a dazzling degree. ~ Andrea Reece

When Winnie and Wilbur fly over a castle, they swoop down to take a closer look. When the castle turns out to be nothing more than a ruin, Winnie realizes that they are 'hundreds of years too late' and so makes a swoosh of her wand to her them back to medieval times. The ruin becomes a fully functioning fortress and the two of them are there, in suitable attire, on a day of much archery, jousting and feasting. Winnie disguises herself as a medieval lady-in-waiting. Wilbur is a dashing knight in armour. But when they come across a naughty knight,making mincemeat of his rivals in the tournament and losing his temper in the banqueting hall, a little magic is required to put him in his place and give everyone else the entertaining day they've come to the castle to enjoy. Sir Wilbur is given pride of place at the banquet and everyone wants to know who the mysterious knight could be. Winnie realizes things could go badly if their true identities are revealed. They make a swift exit before out-staying their welcome, and the castle is restored to the ruin it was. With medieval magic and mayhem from the start, this story has all the hallmarks of a classic Winnie and Wilbur adventure.

The spellbinding new look of this bestselling series celebrates the wonderful relationship that exists between Winnie the Witch and her big black cat, Wilbur. Since Winnie and Wilbur first appeared in 1987 they have been delighting children and adults in homes and schools all over the world and more than 7 million books have been sold.

A Winnie and Wilbur stage show is set to run in Birmingham in 2017 followed by a national UK tour.

There's more Winnie and Wilbur fun & activities to be found at www.winnieandwilbur.com

Korky Paul outdoes himself in the latest Winnie and Wilbur picture book - picked as on of the best childrens books for 0-4 year olds. The Sunday Times

Valerie Thomas was born in Melbourne, Australia, and has lived there for most of her life, apart from six years spent in Europe, where she worked in England, France and Norway. She is a teacher, and has taught in primary, secondary, and special schools in Australia and England as well as lecturing in English Teaching Method in a Teachers’ College in Melbourne.

For many years she worked as an educational researcher and curriculum consultant in the area of spelling, and has written extensively on the subject. Her other main interest is travel. She has travelled to most corners of the world, and has written about her travels: the first piece of writing she had published was an account of her experience picking grapes for the champagne harvest in France.

In 1987 her phenomenally successful children’s book Winnie the Witch, illustrated by Korky Paul, was published by Oxford University Press and won the Children’s Book of the Year Award. It has since been translated into many languages around the world, and also been adapted for CD-ROM. Since then Valerie has written another eleven fabulous Winnie adventures.

More About Valerie Thomas
Add To Wishlist
Buy from our bookstore and 25% of the cover price will be given to a school of your choice to buy more books. 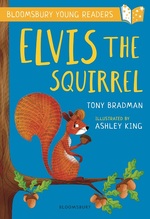 Winnie and Wilbur: Gigantic Antics and other stories

Winnie and Wilbur: The Explorer Collection