LoveReading View on The Goose Road

It’s 1916 and fourteen-year-old Angelique is working on the family farm when she learns that her detested father has been killed in action, while her beloved brother Pascal is still at war. To Angelique, Mother’s grief seems excessive - “How could she have loved father so?” she wonders, and so we wonder what kind of man he was while she focuses all her energy on keeping the farm afloat. Angelique’s strength is formidable. She’s admirably forthright, a force to be reckoned with, especially when adversity escalates and so, with the support of her dear Uncle Gustav, she hatches a plan that might just save the farm. They will venture through France to sell her brother's flock of glorious geese to the Commander-in-Chief of the Somme.

Blending real-life hardships and the horrors of WWI with an overarching fairy tale-esque adventure, this is a classic David versus Goliath story in which a girl steps up to fight multiple Goliaths with large doses of determination, wit and a willingness to take risks. Highly recommended.

France 1916. Angélique Lacroix is haymaking when the postman delivers the news: her father is dead, killed on a distant battlefield. She makes herself a promise: the farm will remain exactly the same until her beloved older brother comes home from the Front. "I think of it like a magical spell. If I can stop time, if nothing ever changes, then maybe he won’t change either." But a storm ruins the harvest, her mother falls ill and then the requisition appears... In a last-ditch attempt to save the farm from bankruptcy, Angélique embarks on a journey across France with her brother's flock of magnificent Toulouse geese.

An impressive debut with a tenacious heroine. One for slightly older fans of Emma Carroll's historical fiction.  The Bookseller 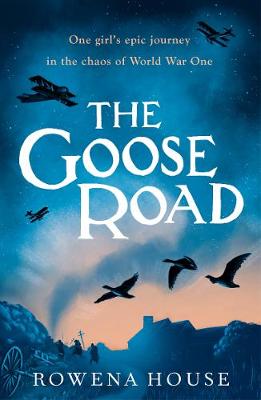 View All Books By Rowena House