January 2020 Debut of the Month

This beautifully written debut has all the elements of a classic adventure and is guaranteed to capture readers and not let them go until the last page is turned. A lost princess, a stolen kingdom, a wicked uncle and his evil henchman, a supernatural ruby and a tiger that talks- who could resist? Our heroine Fly engages from the start- escaping from the cruel master sweep she finds her escape chimney empties her into a tiger’s cage. The tiger does not eat her but decides she has royal blood and speaks to her. Whilst not believing him Fly expertly arranges their escape vowing to return to rescue the other caged animals awaiting their sale by the mysterious bejewelled fat man. Fly has a certain skill which her gang of street urchins has put to good use in the past. She has the power to prevent people seeing what she does not want them to see - when she and the tiger board a horse drawn omnibus the passengers only see a scruffy urchin and a rather large dog. But this is only the start of the adventure and we gradually learn more about Fly’s origins and about the wickedness of the men who have imprisoned the rightful king and are selling the animals and enslaving the people of the beautiful island kingdom to which she and the tiger belong. With the villains in hot pursuit a storm and shipwreck seem to ensure a tragic end to their quest. But with the wonderful twists and turns the reader has become accustomed to, all’s well that ends well. This is a magnificent story of courage, love and loyalty which leaves the reader satisfied and enriched.

Fly never meant to end up in a cage with a man-eating tiger. And though she's sure she's no princess, when the tiger addresses her as 'your majesty', she can't help but vow to free him and return him home. But the bird-filled jungles and cloud-topped mountains of the tiger's homeland are an ocean away. And not everyone wants the tiger - or Fly - to get there alive. With dark and dangerous forces working against them, will Fly be able to fulfil her promise and maybe - just maybe - become the queen her tiger knows her to be? 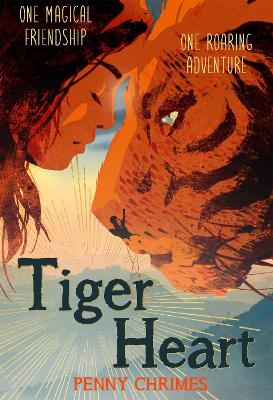 Penny has worked as a television news journalist for most of her career, after starting work in Fleet Street. She's based in Kent and now writes full time.

View All Books By Penny Chrimes