Part of the Havenfall Series

Menace, magic and tension teem in this thrilling fantasy sequel

Hot on the heady heels of Havenfall in which Maddie saved her Uncle Marcus’s inn (a safe haven between unstable ancient worlds), Sara Holland’s Phoenix Flame crackles with tension, family secrets, devastating dilemmas, and more than a dash of romance.

Though the Silver Prince has been banished, Uncle Marcus seems to be recovering, and handsome Brekken made it back from Fiordenkill, Maddie’s summer of high-stakes assignments in Havenfall is far from over. “I don’t feel safe. Not yet,” she remarks as she glides into a glamourous ballroom hoping to have a peace treaty signed. It’s not long before she must brave it to frosty Fiordenkill where, beneath its ethereal, fairytale appearance, beyond the beautiful “ice bridges and palaces of packed snow”, the black-market trade of souls must be stopped.

Charged with magic and Maddie’s fierce fight to protect the inn and all it represents, it’s intoxicating stuff and, unusually for epic fantasy, it’s short, without compromising on the world-building front, which makes it an excellent gateway into the genre. Bravo to Sara Holland for packing so much action, intrigue and richly evocative detail into under 250 pages.

Some of our readers were lucky enough to review the first in this brilliant series, Havenfall - find out what they thought!

After saving the inn at Havenfall from the wicked Silver Prince, Maddie thought all her problems were over. The Silver Prince has been banished, her uncle the beloved Innkeeper is slowly recovering from a mysterious coma, and there are still a few weeks of summer left to spend with her handsome more-than-just-a-friend Brekken. But danger still looms and Maddie soon realises there's more work to be done to protect Havenfall, the safe haven between worlds that her family has run for centuries.

Maddie must embark on a dangerous mission: to venture into the icy Realm of Fiordenkill and put an end to the black market trading of souls that threatens the balance of the Realms. As Maddie tries to accomplish these seemingly impossible tasks, she stumbles upon family secrets that could change everything. What if saving everyone means destroying the only home she's ever known?

This next breathtaking fantasy from the bestselling author of Everless is perfect for fans of Melissa Albert and Holly Black.

Rife with secrets, danger, and magic, Havenfall is a delightful read that blends a fantastical new world with ours in the most seamless and enthralling of ways - Hafsah Faizal

Havenfall is contemporary fantasy at its finest, a smart, poignant rumination on home and family with a supernatural twist. Holland's seamless blending of reality and fantasy will leave you checking your closet doors for secret passages to other worlds, hoping to find a magical adventure of your own - Christine Lynn Herman

Holland is no stranger to intricate worlds, as readers who loved Everless and its sequel will remember, and this new series starter is equally compelling - Booklist

The twists are plentiful ... Fun premise and setting with a popcorn intrigue plot - Kirkus Reviews

A suspenseful, engaging tale of a young woman trying to unravel her past to save her future - School Library Journal

Gripping ... Holland populates her idyllic summit with a panoply of magical characters and powers - Publishers Weekly

Propelled by inventive lore and magic, Jules' story is a heady, addicting page-turner ... Utterly absorbing; a must for fans of Sarah J. Maas - Kirkus Reviews

Holland builds this world effortlessly ... An action-packed, must-have fantasy for all YA shelves - School Library Journal

Holland's lush, intricately drawn world hides an undercurrent of darkness underneath a veneer of beauty and finery, and the twists are genuinely surprising ... Readers will eagerly await her next journey - Publishers Weekly

Sara Holland grew up in small-town Minnesota among hundreds of books. After graduating from university, she worked in a tea shop, a dentist's office, and a state capitol building before heading to New York to work in publishing. These days, she can be found exploring the city's bookstores and consuming too much caffeine. Photo credit: Sub Urban Photography 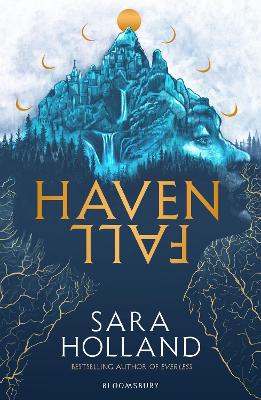 View All Books By Sara Holland