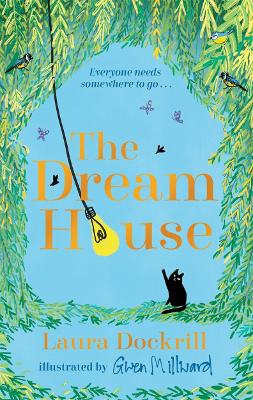 So beautiful, so powerfully moving, the ever-inventive Laura Dockrill has done it again with The Dream House - an incredibly honest, child-centred story about a boy’s struggle with terrible grief (and guilt) after losing his dad.

Beautifully presented with Gwen Millward’s soft, evocative, powerful illustrations - including Rex’s sketchbook drawings that provide poignant insights to his pain - this has all the marks of a future classic. Rex doesn’t talk much now his dad’s gone, and he’s gone to stay with his godfather Sparky, his dad’s best friend since childhood - “Mum said it would be good for me here; Sparky would take care of me so I could get some peace and ‘feel better’. To give her space while she dealt with what needed to be dealt with. But it was also because she couldn’t deal with me.” Rex is worried because drawing “doesn’t make me feel good like it used to”.

Nothing is the same, and he’s terrified of returning to the Dream House, a magical place created just for him. A magical place that’s filled with his dad. But little by little, with Sparky’s sensitive support (what a guy; his tenderness is sublime), and after talking to the boy next door, Rex is able to return to the Dream House, able to begin his long journey back to the world, to a life without Dad, but a world in which Dad is remembered and cherished, in the soothing knowledge that he doesn’t have to carry the heavy burden of grief alone.

Everyone needs somewhere to dream. Rex has gone to stay with his godfather, Sparky. Rex doesn't say much but that's OK because Sparky is always on hand with a cup of tea to enjoy on the sofa, set up outside like an outdoor living room. Rex has his sketchbook, and he draws how he feels even if he doesn't talk about it. And in Sparky's garden, hidden under the canopy of the willow tree, is the Dream House: a lovingly created space just for Rex, to dream, to play, to think, to be. A place he's loved all his childhood. But to go inside now Rex must summon his strength for revisiting the ghosts of his past . . .

An evocative sketchbook novella revealing a boy's inner world, accessing his feelings through drawing and reconnecting with the people who love him, told through Laura Dockrill's vivid storytelling. Fully illustrated throughout by Gwen Millward.

It looks so slight. Its illustrations promise something gentle and delicate. So I have a feeling that this book may be mistaken as a quick and easy read - and it's not. It's something much more memorable, strange... almost grown up. And written in such a beautiful, original style! It's sophisticated, poetic, exquisitely sensitive to nature and sorrow and turmoil and desperation. And rich in metaphors... The grass is long and happy. ...though it should probably come with a WARNING: Now and then, you may not quite understand. That's because this is a book about a boy who can't quite understand himself. -- Geraldine McCaughrean

Laura is one of the most original and interesting voices in children's literature and I always look forward to reading any new book she writes. -- Francesca Simon

Laura Dockrill is a performance poet and novelist. She was named one of the top ten literary talents by The Times and one of the top twenty hot faces to watch by ELLE magazine. Laura is a young, talented writer/illustrator who is a graduate of the BRIT School of Performing Arts. She has performed her work at the Edinburgh Fringe, Camp Bestival, Latitude, Bookslam and the Soho Theatre and on each of the BBC's respective radio channels, 1-6. She has been a roaming reporter for the Roald Dahl Funny Prize, judged the BBC National Short Story Award, and has appeared on Blue Peter, Channel 4 News and Newsnight. Laura also teaches Guardian Masterclasses in writing for children and is on the advisory board at the Ministry of Stories.

Her books include Mistakes in the Background, Ugly Shy Girl and Echoes. Her first series for younger children, Darcy Burdock was shortlisted for the Waterstones Children's Book Prize. Lorali is her first novel for teenagers.

Laura is a judge on the Blue Peter Awards 2018:  “I adored judging the Blue Peter Book Award, the nominated list was incredibly strong and made judging the prize so difficult. Which I think is a very good thing for the world of children’s books! I met wizards, talking toys with speech impediments, and was flown across the globe to marvellous new landscapes. I met big foot, uncovered mysteries and had my head blown off by space facts. It was a wonderful privilege and the shortlist is stunning!”

On her inspiration for The Dream House, Laura says: ‘when I was little my dad’s best friend, our godfather (who had no kids of his own) built my sister and I a wooden little shed/hut/playhouse in the bottom of his garden. It had a roof like a real house, a rounded door with a latch and an actual glass window. Inside he placed an old grey itchy carpet that he found in a skip, massive pictures of dolphins, giraffes and elephants and two of those old-fashioned desks with the inkwells and lifty lids – one for Daisy and one for me, the desks were always stuffed with magazines, colouring books and crayons. There was electricity (my godfather was an electrician) and there was even an electric heater for when it got cold in the winter. He called it ‘The Dream House’ and it overlooked the garden, which was overgrown, preserved and wild; long grass, leaping frogs and a beautiful willow tree. It really was the place where dreams were made.’

How to be Me 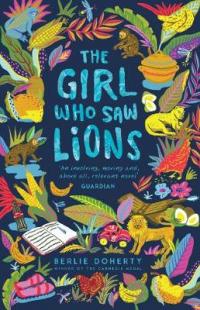 The Girl Who Saw Lions