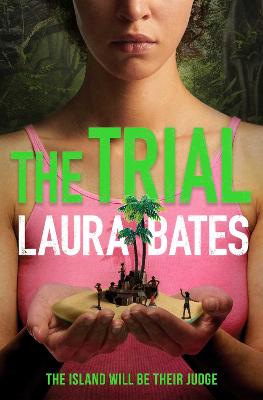 October 2021 Book of the Month

Utterly gripping and of-the-moment, The Trial addresses vital issues around consent, coercive control, victim-blaming and male entitlement with a desert island survival scenario providing the perfect set-up for a tinderbox situation. With this novel, Laura Bates, award-winning writer, activist and founder of the Everyday Sexism project, has created a thought-provoking thriller with page-turning potency and resonance.

When a group of cheerleaders and footballers are washed up on a desert island following a plane crash (and a post-game party no one seems comfortable talking about), their attention is initially focussed on survival - what they’ll drink and eat, when they might get rescued. But then, as time passes and a series of strange, apparent accidents befall them, suspicions mount and paranoia reigns: “There’s something ‘off’ about the fabric of the group. Like a jigsaw where all the pieces have been reshaped and none of them fit together any more”.

As the tension escalates, vital truths about gender relations are raised (and class disparity, too), such as when one of the characters observes, “The things that scare us are very different from the things that scare them” of the differences between her female peers and the guys in the group. This is Lord of the Flies with a powerful feminist message and cinematic scope.

After a plane crash sees a group of seven teens washed up on a desert island, their first thought is survival. But a terrible secret from a party the night before has followed them ashore. Facing deadly threats and the fear of being stranded forever, they quickly discover that being the most popular kid in High School doesn't help when you're fighting to stay alive. As the island deals each of them a dangerous blow, it's clear that someone is looking for justice. Now survival depends on facing the truth about that party: who was hurt that night, and who let it happen?

'Laura Bates is one of the most important feminist voices we have and The Trial is engaging and clever, thought-provoking and thrilling. I inhaled it in one sitting.' - Louise O'Neill, author of Asking For It

Laura Bates studied English at Cambridge University and went on to be a freelance journalist. She has written for the Guardian, the Independent, the New Statesman, Red Magazine and Grazia among others. She is also contributor at Women Under Siege, a New-York based organisation working to combat the use of sexual violence as a tool of war in conflict zones worldwide. She is the founder of the Everyday Sexism Project.

More About Laura Bates
Add To Wishlist
Buy from our bookstore and 25% of the cover price will be given to a school of your choice to buy more books.

The Gifts That Bind Us